On view through Thursday, August 26th

While humans are similar to other animals, sharing 98.5 percent of our DNA with chimpanzees for example, our species is undoubtedly different. Over the last few months we have created six terrazzo compositions using various stone, glass and plastic aggregates. As part of an ongoing terrazzo project, these works explore the ways humans have attempted to locate themselves in nature, i.e., a comparison with the things most similar to ourselves.

A key characteristic that appears to set us apart as human is that we can think about alternative futures and make deliberate choices accordingly. When a hurricane is approaching, we use systems of language and technology to warn each other. Special computers measure changes in the wind, sirens sound, and vehicles carry us to safer places. We can imagine what might happen and then act appropriately to ultimately preserve our species. Although the topic is still under debate, other animals are also able to predict an impending hurricane. Research shows that birds can sense environmental changes such as drops in barometric pressure and infrasound waves. In response, as storms approach they will often land to wait for it to pass. Similarly, sharks and large fish will swim out to deeper water and land animals will move to higher ground. How do these creatures know what to do and what actions to take to bolster their chances of survival?

In ways that we do not fully understand, animals are sensitive to the most minute shifts in the environment. They use this vigilance to navigate the world in the same way humans use technology, however because we are unable to imagine the mental levels at which animals operate, we repeatedly deny them the forms of agency we take for granted in ourselves. Birds did not discover flight as humans did; flight discovered birds. In this way, our humanness is blinding and can become very lonely. We feel disconnected from every other animal, and project our emotions and ideas onto them and onto the environment we share. It is comforting to describe a dog “acting joyful” or to witness a chimpanzee “having a tantrum” and Pooh Bear would not look as cute without his red T-shirt. The queen ant and her slaves, the man in the moon, the mouth of a river and the eye of a storm are also examples of the anthropomorphism that tries to shape nature into a reflection of our species.

Recently, humans have gone so far as to name each and every hurricane. For several hundred years after the Europeans arrived many hurricanes in the West Indies were named after the particular saint’s day on which the hurricane occurred. For example, there was “Hurricane Santa Ana” which struck Puerto Rico on July 26, 1825, and “San Felipe ” and “San Felipe II” which hit Puerto Rico on September 13 in both 1876 and 1928. More recently, the United States began using female names for storms, after abandoning a confusing two-year old plan in 1953 to name storms using a phonetic alphabet (Able, Baker, Charlie) when a new international phonetic alphabet was introduced. The practice of naming hurricanes solely after women came to an end in 1978 when men’s and women’s names were included in the Eastern North Pacific storm lists.

Today, the World Meteorological Organization has a strict procedure for naming these storms. For Atlantic hurricanes, there is a list of male and female names which are used on a six-year rotation. The only time that there is a change is if a storm is so deadly or costly that using the name again would be inappropriate. In the event that more than twenty-one named tropical cyclones occur in a season, any additional storms will take names from the Greek alphabet.

We are unaware of any systems of naming that animals may have for storms. Many animals use complex and varied vocal patterns to describe changes in their environment but are limited with their episodic memory and mental time travel capabilities. However, there is strong evidence that dolphins name themselves with signature whistles and gorillas that have been taught sign language appear to understand names and ask for other animals and keepers by their name. In the attempt to understand animal behavior human-like comparisons can be useful, harmful, or both if the results serve only the interests of humans.

Dutch primatologist and ethologist Frans de Waal argues, “To rail against anthropomorphism for the sake of scientific objectivity often hides a pre-Darwinian mindset, one uncomfortable with the notion of humans as animals. When we are considering species like the apes, which are aptly known as “anthropoids” (humanlike), however, anthropomorphism is in fact a logical choice. Dubbing an ape’s kiss “mouth-to-mouth contact” so as to avoid anthropomorphism deliberately obfuscates the meaning of the behavior. It would be like assigning Earth’s gravity a different name than the moon’s, just because we think Earth is special.” But the Earth is special in that it’s the only planet we know of that holds life – animal and human.

Western religious ideas describe humans and animals as products of intentional divine creation, with humans uniquely formed in the likeness of their deity and thus enjoying a privileged role in the intended workings of the cosmos — including, for example, access to an afterlife. A modern biological view of the world, however, supports the idea that our species as we know it emerged a few hundred thousand years ago, and that we are are only one species of animal among many — one leaf of one branch of the phylogenetic tree of life and enjoy no particular special status. If or when we (hopefully!) make contact with extraterrestrial life, how human will we feel? Will we feel more or less connected?

Ficus Interfaith is a collaboration between the artists Ryan Bush and Raphael Cohen. As much a research initiative as a sculptural practice, Ficus Interfaith pursues projects that focus on interactions with nature and natural history- from agriculture to conservation to construction and energy harnessing. Connections that form serendipitously between old and new interests expand and reshape the future ambitions of the collaboration. Recent projects have included sculptural and architectural applications of terrazzo, thin-set concrete over bamboo and wicker structures, orange peel water filtration and fungi-based construction materials. They have recently exhibited at MX Gallery (NYC), Sculpture Center (NYC), Paradise (www.inparadi.se), From the Desk of Lucy Bull (Los Angeles), and Alyssa Davis Gallery (NYC). 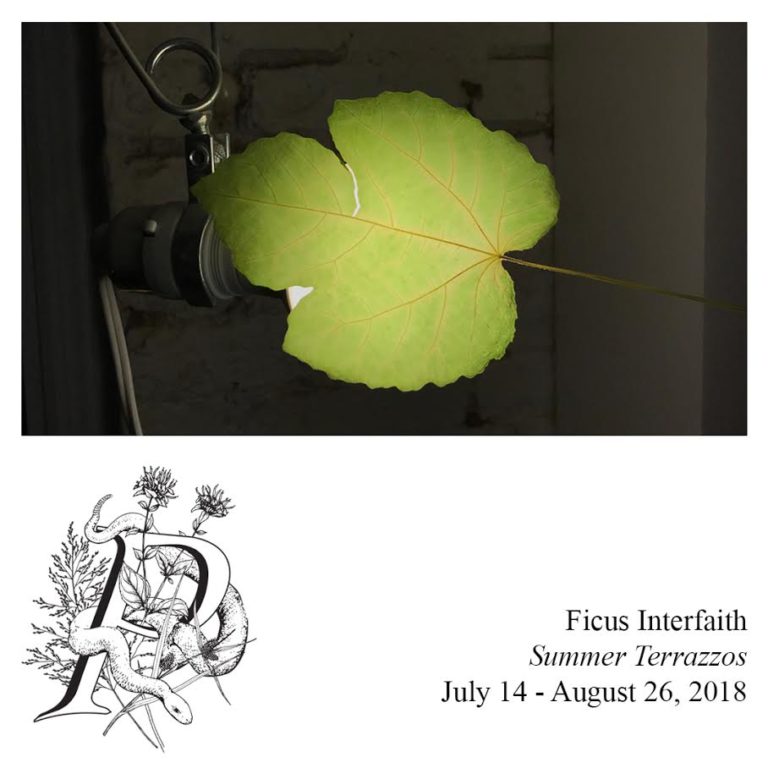