Stuart & Co. Gallery is pleased to announce interspace, an exhibition of new works by Samantha Fickel. Through large-scale kinetic installations and light manipulation, Fickel immerses the viewer with unexpected sensory experiences that invite us to consider the ways technology influences how we understand and occupy a place, and question where we begin and end in our environment. Recalling Robert Irwin’s coined phrase “Our reality is confined to our ideas about reality,” Fickel strives to set up situations that challenge our cognizance in order to expose links that exist between experience, consciousness, and perception.

The title interspace quite literally means a space between objects. Works such as The Bend in a Body focus on the physical body’s hyper-awareness as well as make tangible the “empty” space that surrounds us. Projected on a delicate piece of reflective Mylar is a simple contracting and expanding bar of light. The reflected light dances around the entire room and is caught mid-air by suspended pieces of sheer fabric that amplify and reflect the physical gestures of the viewer. In this way the installation acts as a large analog sensor, an extension of our senses, and the artwork is shaped by the nature of its viewer locking the two in a system of information.

The same is true of Split Screen, which alters the familiar experience of looking at a monitor into endless variations of imagery evolving with each shift of the viewer’s gaze. The piece consists of a curtain of polarizing filter strips flanked on either side by the televisions from which they were extricated. At first glance both screens appear to be blank, but when viewed through the curtain of polarizers, a skewed version of the animation playing on each screen becomes visible. Playing with polarized light, Split Screen reveals the depth of possibility hidden within the physical properties of a device to serve as mediums for crafting unfamiliar ways of seeing.

The experience of space and time is being shaped in new ways as digital habits leak into everyday life. One cannot help but think, act, and see the world through a mediated perspective. Fickel attempts to uncover these veiled boundaries where the physical realm meets the digital. Utilizing installations that live and breathe with the audience, Fickel’s works act as mere proxies for our senses, making the tangible virtual and the virtual tangible – simultaneously. interspace is a celebration of light, providing rare insights into the imperceptible and the complexity of absence. 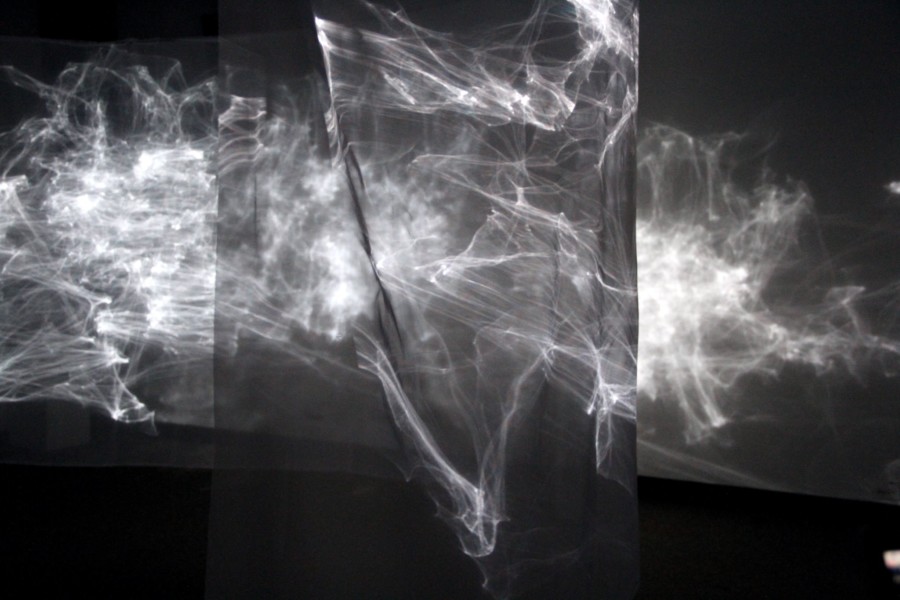