MAS Context: Can we not open our eyes to our own treasures?

Architectural photographer and historical preservationist Richard Nickel would have turned 90 years old on May 31, 2018. To commemorate this significant date and to discuss the relevance of Richard Nickel and current preservation efforts, we are organizing an event as part of MAS Context’s 2018 Spring Talks series with Tim Samuelson, John Vinci, and Bianca Bova.

Photographer and activist Richard Nickel dedicated much of his life documenting and battling to preserve Chicago’s diverse architecture, most notably the work of architect Louis Sullivan. He died on April 13, 1972, when a portion of the Old Chicago Stock Exchange building collapsed on him while trying to salvage a spandrel panel. As noted by the Chicago Landmarks Commission, “After Nickel’s tragic death, his role in bringing attention to Chicago’s historic architecture was widely recognized. His reputation and importance have continued to grow with the publication of [Richard] Cahan’s biography, the display of architectural ornament he salvaged, and as many of his photographs have become iconic images of the city’s historic architecture.”

In 2010, Richard Nickel’s works, which include negatives, photographs, and research papers, were donated to the Ryerson and Burnham Libraries at the Art Institute of Chicago by the Richard Nickel Committee.

During this event, attendees will be able to see in person some of the ornaments that Nickel salvaged and Tim Samuelson, John Vinci, and Bianca Bova will discuss the importance of Nickel and the stories behind some of the artifacts. Tim and Bianca will also discuss the newly formed Chicago Architectural Preservation Archive (CAPA), an organization devoted to the documentation and stewardship of materials related to the practices of early urban preservationists who gravitated around Richard Nickel.

The event title uses Nickel’s own words from a letter to the editor published in the Chicago Tribune on May 24, 1960.

For more information about the event, please visit: http://www.mascontext.com/news/can-we-not-open-our-eyes-to-our-own-treasures/ 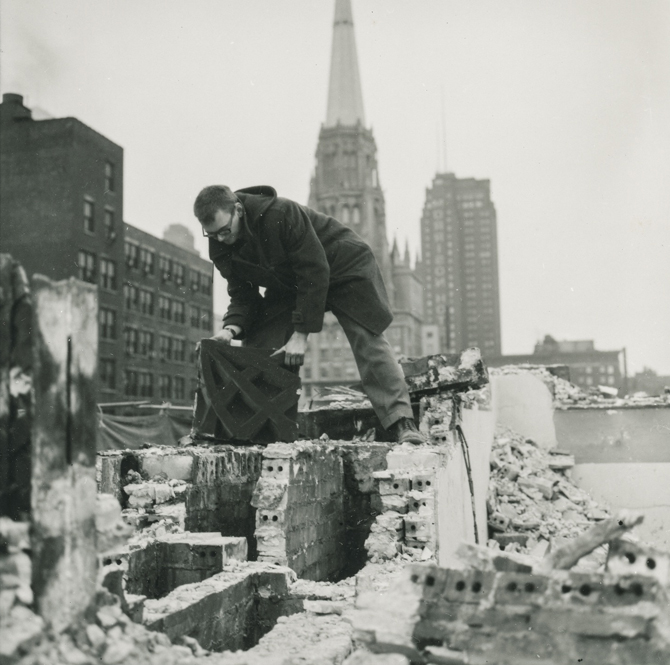