Gallery Talk: Never a Lovely So Real: Photography and Film in Chicago, 1950–1980

Join curator Michal Raz-Russo for an overview of the photography exhibition, Never a Lovely so Real: Photography and Film in Chicago, 1950–1980.

In his 1951 book Chicago: City on the Make, Nelson Algren offered bittersweet praise for the city: “Like loving a woman with a broken nose, you may well find lovelier lovelies. But never a lovely so real.” This unique character—fraught with affection, tension, and contradiction—is revealed in the work of the many photographers and filmmakers who documented Chicago in the second half of the 20th century as cultural, social, and political events transformed the city. These artists focused on Chicago’s history as a city of neighborhoods, many of them fiercely segregated and separated from one another. Together, they constructed a portrait of Chicago that speaks equally to its allure and its haunting brutality.

Drawn largely from the Art Institute’s collection, this exhibition highlights the work of artists who through their images and films captured the life of their own communities or those to which they were granted intimate access as outsiders. Featured among them is a network of photographers who focused on Chicago’s South Side during a period coinciding with the emergence of the city’s Black Arts Movement. Billy Abernathy, Darryl Cowherd, Bob Crawford, Roy Lewis, and Robert A. Sengstacke all produced work in connection with the revolutionary Bronzeville mural, the Wall of Respect (1967–71). Other projects, such as Mikki Ferrill’s decade-long documentation of an improvised South Side club, The Garage (1970/80), and two of Gordon Parks’s Life magazine assignments (1953 and 1963), likewise underscore the role played by Chicago as a national center of black culture and politics.

These projects are complemented by works created in other neighborhoods that were undergoing significant transformation. For example, Danny Lyon’s 1965 series Uptown conveyed both the struggle and immense pride of residents living in an area where immigrants from central Appalachia had recently settled. In a similar manner, Luis Medina gained the trust of members of Hispanic street gangs while photographing their graffiti in areas surrounding Wrigley Field in the late 1970s. This rich history of street photography is complemented by the parallel emergence of filmmakers such as Tom Palazzolo and Kartemquin Films, who poetically captured the city’s changing landscape. Together, these works reveal Chicago’s character, lovely and ever so real. 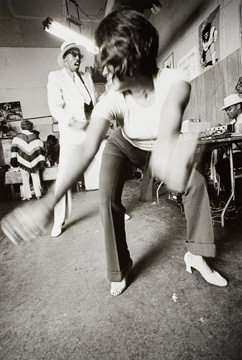