On view through Wednesday, May 30th

The paintings of Douglas Hofmann are critically acclaimed for their glowing surfaces, detail and softly lighted forms. Hofmann expertly combines his own methods of painting with Old Master techniques, creating a beautiful aura of light and atmosphere that is more often found in great Baroque paintings. He pays meticulous attention to detail and creates harmonious compositions with superbly balanced colors and shapes.

Hofmann was born in Baltimore, Maryland in 1945 and began his training in art after high school at the Maryland Institute of Art. During his first year there he discovered Joseph Sheppard. “I used to walk down to the first floor and stick my head in this room that was totally quiet. You could hear a pin drop. It was Joe Sheppard’s class.” He began studying with Joe, taking on anatomy, drawing and painting from the model, all of which were new to Hofmann.
He also discovered the Maroger method, which enables the artist to use thin layers of paint and techniques similar to those of the Old Masters. Through his burgeoning interest in the Old Masters, Hofmann began to develop his individual taste.

Vermeer’s interiors with figures became one of his favorite themes. Emulating Vermeer, he painted situations from his home and studio using his wife and children as his models. Hofmann later expanded his subject matter to include his memorable nudes and his much-loved ballet works. “I borrow from everything I like, for example, the works of Vermeer, Rubens, Degas and Mucha. I’m using a Dutch technique but with an Art Nouveau model, Victorian too. And I love the female figure, I think it’s the most beautiful thing there is.” His subjects have changed over the years, but women have continued to dominate his panels and prints.

Hofmann’s works have been exhibited in numerous group and one-man shows at prestigious galleries and museums, in every major city in U.S.A. and Japan, many of which have sold out completely during their opening nights. He has received numerous awards for his works, including first prize at the Peale Museum in Baltimore, 1970; “Best “WITH MY PAINTINGS, I STRIVE TO GET A FEELING OF AIR. I WANT TO EXPRESS A ROMANTIC EMOTION.”
—DOUGLAS HOFMANN

Paintings in the Traditional Manner” at the Baltimore Museum, 1971, “Best in Show” at the Washington County Museum, Hagerstown, MD, 1972; “Best in Show” at the Center Club in Baltimore, 1973 and 1978. In 1988 he was awarded a Certificate of Merit for his painting The Secret by the Salmagundi Club at its Eleventh Annual Non¬members Juried Exhibition.

“With my paintings I strive to get the feeling of air. There is a ‘signature’ to the work that reveals my hand, my hand, my feelings and my personality. You can see the manipulation of the paint and the brush strokes. I don’t want to paint everyday scenes. I’m a dreamer. I want to express a romantic feeling in my work. This appeals to me as a form of self-expression in today’s world of structured reality.”

“MY WORK STARTS AT THE MOMENT SOMETHING APPEARS IN FRONT OF MY EYES; COLORS, IMAGES, A BOOK, GOLDEN LEAVES THAT FALL HAS LEFT BEHIND.”
—FELIX MAS

Spanish artist Felix Mas uses his paintbrush to convey emotion. It is his gift. It is our good fortune. He considers himself a traditionalist, obsessed with form and color, creating images that celebrate femininity and luminous beauty of the female form.
Born in Barcelona, he trained at both the Artes y Officious and the Escuela Superior de San Jorge, then furthered his artistic education with extensive travels throughout Europe and the United States, eventually returning to his native Barcelona to work.
For Mas, painting implies color, emotion and impression. His works, he says, are “infinite.” We, in turn, have the opportunity to decipher with our eyes and explore and interpret with our feelings. His elegantly dressed female figures, whether gazing into the distance or drifting into a daydream, captivate us with their graceful radiance and evocatively strong emotions.
Mas finds inspiration in women amidst the opulent settings of the Asian world, especially Japan and India with their beautiful costumes and landscape, Egypt, ripe with its enigmatic symbols, and ancient Greece and Rome, saturated with their unique elegance and sensuality.
Despite his fame, Felix Mas has remained a modest man, continuing to strive to achieve his dream of becoming an “Artist” in its most complete and absolute meaning. He enjoys working in his studio in Barcelona, blessed to be near his extended family. His studio is his world, the place where he transcribes everything he has experienced from the world outside and gives shape to what he has already gathered. He can be found there laboriously creating his own colors using natural pigments. In the background classical music plays as he works his twelve-hour days. 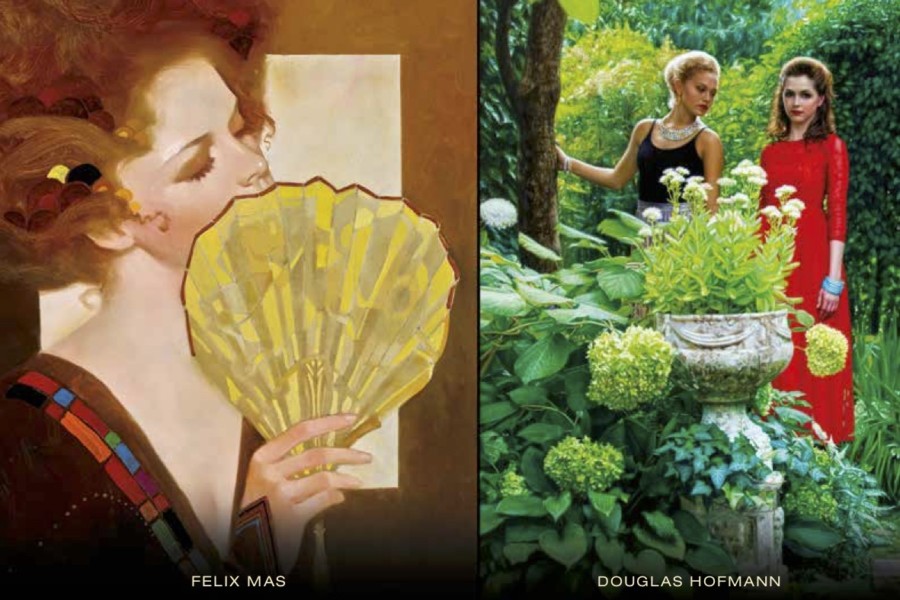