A reminder that from here on out, hopefully, we’ll be able to focus on 4 movies each month centered within a specific time period/subject matter/theme/director/etc. Which also means more opportunities to catch the queer films considering everyone’s busy schedules!

This month we will be visiting the historical moment of the Stonewall riots and the after-effects of the political movement that arose from the event. The fight for LGBTQ rights and for the first time, the ability to be out of the closet allowed for greater freedoms for many during the 1970s. We will be witnessing first hand accounts from the era as well as fictional films that were filmed in real clubs during the time period.

“Nighthawks” (1978) directed by Ron Peck, a homosexual man is forced to hide his sexuality by day while living his secret life by night.

“Taxi Zum Klo” (1980) directed by Frank Ripploh, the story of a schoolteacher and the contrasts between his public and private lives, the film documents pre-AIDS gay culture in West Berlin.

Although for many decades, LGBTQ characters were not shown under a flattering lens and were often sad, suicidal or murderous people, I will do my best to showcase the rare instances of characters being able to take some positive ownership of their sexualities in addition to the darker more “problematic” films.

Also, due to how western society works as well as the distribution of wealth and technology, the majority of the films, at least through the 1970s will also mostly be cis, white and male, but rest assured that there will be more diverse films as the series comes along. I hope to have a few “specials” in between the chronological order we will be watching the films in to break things up; including documentaries on LGBT historical/popular figures and films that are Queer-Coded starring LGBTQ icons.

Please be considerate of the audience and subject-mater, HUME is a safe-space and anyone who acts otherwise will be asked to leave.

Bring your friends!! SRSLY, having trouble getting LGBTQ people to show up! Makes me sad, but you do you babes.
BYOB and BYOP (Bring your own pillow for comfort!!)
—– 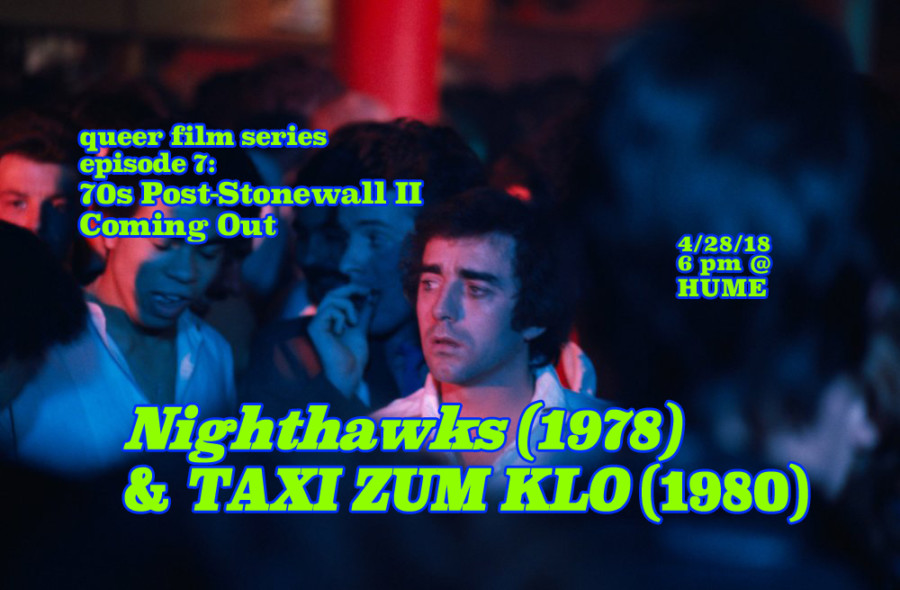