Join Kid Koala’s turntable orchestra with this interactive live performance. Kid Koala presents an innovative collection of dreamy, atmospheric tracks composed especially for this event. In this latest live experience, audience members are seated at stations equipped with a turntable, effects box, and a small crate of color-coded vinyl records. Through subtle colored lighting changes, the audience is cued to play along. An integral part of the show, the audience accompanies Kid Koala to create an “ambient vinyl orchestra,” melding individual strains into a fluid body of sound. The idea is to have 60 harmonized turntables create a unique, uplifting, dynamic evening of light and music.

Presented with the Empty Bottle

Eric San, also known as Kid Koala, is a world-renowned scratch DJ, music producer, and award-winning graphic novelist. He has released four solo albums on Ninja Tune, the most recent being 12 Bit Blues. He has released two graphic novels, Nufonia Must Fall and Space Cadet, and has been involved in collaborations including Gorillaz, Deltron 3030, and The Slew.

Kid Koala has toured with the likes of Radiohead, Arcade Fire, the Beastie Boys, Money Mark, A Tribe Called Quest, Mike Patton, DJ Shadow, and The Preservation Hall Jazz Band. He has contributed to scores for the films Shaun of the Dead, Scott Pilgrim vs. The World, Looper, The Great Gatsby, and Men, Women and Children and composed music for the National Film Board of Canada, the Cartoon Network, Sesame Street, and Adult Swim. He has also been commissioned to create music for runway shows for Belgian fashion designer Dries Van Noten. 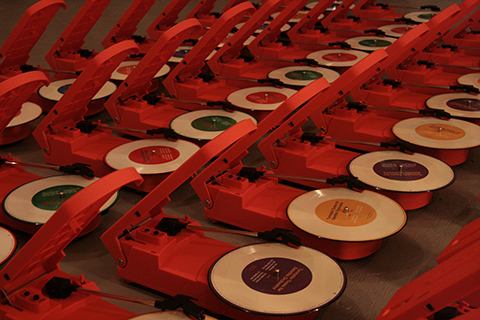