On view through Saturday, June 9th

The work featured in Entre Rios y Montañas stems from Herrera’s deep interest and continued investigation of the relationships between collective memory and historical instances of state-sponsored violence and trauma inflicted on politicized bodies. Often the victims of these crimes, or rather their bodies that disappear, leave behind stories not in words but in gesture. Trails of clothing are found in the deserts between borders as they get stuck on fences with barbed wire or wash up onto shores of beaches. These garments are sometimes attached to lifeless bodies while others manage to claim autonomy from the flesh.

Through these collographs, akin to rubbings, Herrera explores the connection between clothing and the body, as well as the relationship between forensic evidence and items of personal significance. By employing this print-based process, Herrera partakes in an act of remembrance as he produces tracings and impression of clothing left behind. His harsh, and almost violent, treatment of the objects carries forth into the artwork’s final presentation. Ultimately, the objects of clothing rendered in Herrera’s work are declarations unto themselves, left behind by bodies to evoke lived experiences.

Jonathan Herrera is a print-based studio artist and teacher from Chicago, IL. He holds a BFA from the Minneapolis College in Art and Design. Through his studio practice and teaching philosophy, Herrera engages multiple facets of place-making and thinking in order to express ideas through concept building, process, and materials. He constantly works to create accessibility in both art and education by connecting his studio work, public work, and community engagement. Herrera has recently exhibited work at the Minnesota Museum of American Art, The Soap Factory (Minneapolis, MN), and Concordia Gallery (St. Paul, MN). 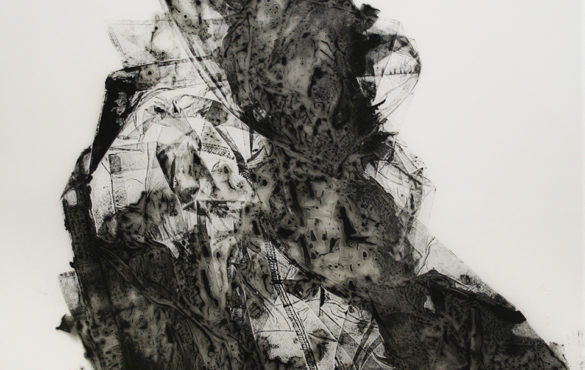