No Barrier To Entry

On view through Friday, April 27th

No Barrier to Entry opens our borders to artists from Brazil, Mexico, Croatia, and Australia for an engaging multi-lateral conversation. This exhibition is an opportunity to consider the universality of art through the vernacular of pencil and paper. Before Damien Hirst taxidermied sharks, before Jean Claude and Christo wrapped Chicago’s MCA, before Jackson Pollock dripped paint, even before Marcel Duchamp’s readymade urinal, there was pencil and paper for the creation of artistic ideas. Historically, drawing served as the foundation upon which other skills were built. Drawing was the initial render, a casting off, a preparatory study, leading to a masterwork in a more highly regarded medium. Contrary to some opinion, this does not marginalize drawing, this elevates it. Without that two-dimensional proposition of visual thought, the transition to something more fully conceived might never happen. To express ideas-humble and complex-through line, shading, proportion, and placement, is to master the consummate universal language. Unlike a readymade urinal, the works on paper of the four artists presented here require no esoteric lecture or didactic to understand it. Put simply, this exhibition reaffirms the ability of works on paper to awe and inspire.

Henrique de França’s figure drawings exploit the blankness of the paper through minimal insinuation of line and shadow. His willingness to abandon figures to the emptiness of the page is audacious and compelling. De Franca artificially defines the limits of urban and rural as the limits of civilization in order to create his dramatic compositions in which something appears to have just happened or is about to. “Even when nothing seems to happen, there is a sense of pensiveness, as if the characters are in the grip of internal reflections about life, memory, hope, and change. My work is about creating stories that people can relate to from a personal and nostalgic point of view. The drawings also address the confrontation between generations, traditions, and classes, as a means of reflecting upon the construction of a society, all from a Latin American perspective.” De França likes to think of his work as “metaphorical social commentary.” Henrique de França has a BFA from Universidade Sao Judas Tadeu and Postgraduate work in Graphic Design from Fundacao Armando Alvares Penteado. He has had work included in international publications from the US to China, and his work is quickly making its way into sophisticated private international collections. Da Franca is currently living and working in São Paulo, Brazil.

Alejandrina Herrera creates and recreates the curious and the banal with a hyper-realism that defies pencil and paper. Herrera offers her work as a counterpoise to the rapidly changing digital world in which we live. “By using pencil drawing, nostalgia and broad white spaces in my work, I invite the spectator to slow down, observe and contemplate themselves and the beauty in life. With our minds also working in a digital way, I tend to go back to an “analogue” form using non-digital techniques such as pencil drawing, which is a meticulous and slow-paced process.” Herrera creates scenarios questioning how life and social relationships have changed over time. She incorporates the notion of memory by using old photographs as source material for her work. “The process of creating memories is usually quick, imprecise and abstract. By drawing in miniature, I also try to maximize details to recover an experience that we may have thought was forgotten.” Herrera’s exacting diminutives create an intimacy with the viewer akin to the narrative beauty of Albrecht Durer’s Renaissance prints, or the illuminations found in a medieval book of hours. Alejandrina Herrera earned her BFA from Universidad de Monterrey and attended drawing and sculpture workshops with artists Ramiro Martinez Plasencia and Miriam Medrez. Her work has been shown at the Dallas Art Fair, and has also been published in local (La Peste, México) and international magazines (INDIGO, Colombia, Rare Magazine, Australia). She was born and raised in Monterrey Nuevo León, where she currently lives.

Catherine O’Donnell walks us through an Australian suburb of public housing via mechanically precise graphite images. “I see the suburbs as full of connection and disconnection, sameness and difference. In short, my drawings examine suburban living as a site of complexity. I am particularly interested in the way that the vernacular architecture and general streetscapes of the places we regularly inhabit become recessed into our minds like wallpaper. My drawings whilst uninhabited, still capture traces of human intervention with narrative elements embedded in the commonplace structures: an open window, a door ajar. While my drawings are clearly representational, the realism in my work is not merely a reproduction of the visible. It is the elevation of the abstract form, the underpinning geometry and the distillation of the spatial composition that interests me. To this end, I extract the building from its surroundings, deleting extraneous information, in order to emphasize the simplified form and obtain the final image. I use representation as a catalyst to revisit these spaces imaginatively, and find the aesthetic poetry embedded within the suburban landscape, while, at the same time, disrupting cultural prejudices which prevent people from seeing the underlying elegance of these simple buildings.” Catherine O’Donnell has an MFA in Drawing from the National Art School Sydney and a BFA from University of Western Sydney. Her exhibitions and residencies have taken her across Australia, Paris, Rome, Venice and London. Exhibition highlights include Close to Home: Dobell Australia Drawing Biennale, a solo exhibition at Sydney Contemporary, and many others. She has won numerous awards and commendations, and her work is held in numerous public and private collections, locally and internationally. (Currently represented by Mayspace Sydney, Australia.)

Ana Zanic departs from black and white representation with water color and pigment on paper, creating abstractions which offer just enough information to initiate a narrative in the viewer’s mind. Her paintings appear, at first, to occupy the entirety of some unknown land, but, then, they beckon you closer, until you are focused on the miniature societies occupying and traversing them. It is this seduction into other worlds that empowers the work. No Barrier to Entry juxtaposes pencil drawings with Zanic’s watercolors because, within the ebb and flow of subdued color, Zanic tells us stories using calligraphic figures every inch as precise as a drawing, while conveying the same artistic intentionality. “For me, making art has always been a search that allowed me to explore the formal, visual elements, as well as my personal feelings, through an intuitive, spontaneous process. Through abstract form, I often investigate questions of memories, past, and origin. My abstract paintings are executed in a combined media of watercolor and ink. They are built with layers of washes, intermixed with dynamic lines, scribbles and marks of ink drawing, with an emphasis on the mark making. The spontaneous and gestural activity of mark making in these pieces is closely tied to calligraphy, language, and symbolic communication.” Zanic describes her painting as “…both controlled and accidental.” Ana Zanic resides outside of Chicago but is originally from Croatia. She is classically trained, with a Master of Fine Arts and Art Education, from the Academy of Fine Arts, University of Zagreb (Croatia). Zanic’s work is shown in galleries throughout the US; she has a prolific exhibition record. Her work can be found in many exclusive public and private collections. 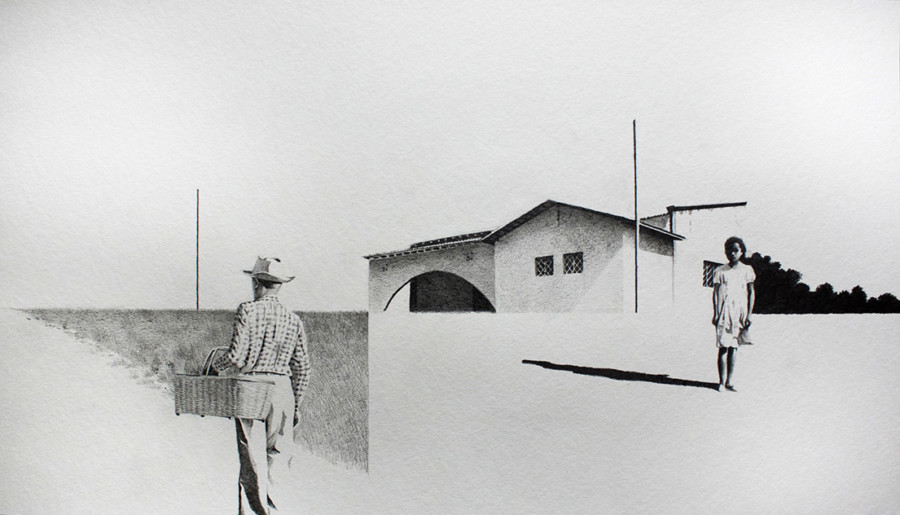