On view through Sunday, April 29th

A solo project by Dutes Miller

The Fool: Infinite and Boundless workshop
on April 1 from 2-4 pm by Alia Walston

“Love the Giver” is a term historically associated with the Victorian Era etiquette of accepting gifts from someone as a guest in their home. Within the context of this exhibition at The Franklin, the term is used in a purposefully slippery way. Here it becomes a phrase that reflects upon various expressions of sexuality, generosity and mysticism.

Dutes Miller transforms the outdoor architectural structure of the Franklin into a ritualistic space that will house a new series of sculptures. Miller’s recent body of work is driven by an investigation of queer male sexuality through a tactile exploration of materials such as plaster, resin and paint. From a conceptual standpoint, he is interested in the notion of an object that is penetrable (orifice) versus one which penetrates (phallus). This includes aiming to find the potential conflation of the two through his sculptural experiments. Hence, many of these works appear to be in a state of transformation. Much like his shamanistic performances with his partner and collaborator Stan Shellabarger, Miller will activate these objects through a series of esoteric rituals over the course of the exhibition. His libation vessels and other “new relic” sculptures will be activated on the opening night with a collaborative performance, which aims to remove obstacles from personal and collective elation. A fire ritual and instructions from the artist will be disclosed on the opening night.

Complementing Miller’s solo project outside, there will be a soft premiere of Derrick Woods-Morrow’s first film “The Roach is Coming” (2017) which will be on view inside of The Franklin home. Woods-Morrow’s photographic practice has recently extended into the creation of moving image work. “The Roach is Coming” focuses on the artist’s deeply personal relationship with his childhood friend and first sexual partner Adam. The two grew up together in a small town in North Carolina. The film is organized around an intimate conversation between Woods-Morrow and Adam on the occasion of the artist’s visit home. They reflect upon their interracial relationship, shared memories of boyhood sexuality, and Adam’s decision to become a police officer. One of the central acts of the film is Woods-Morrow’s bathing of Adam. The audio of their conversation in the bathtub is coupled with imagery that complicates the viewer’s understanding of their relationship.

Also presented inside of the home is one of Elijah Burgher’s vibrant colored pencil drawings or “flags” from his snakes and ladders series. According to the artist, “snakes and ladders are figures of infernal descent and heavenly ascension respectively, and can be found in various shamanisms from across the globe. The original Indian board game and its later Victorian version had a moral significance: ladders represented virtues and snakes represented vices. I am not interested in the moral lessons, just the beauty of the game board and the cosmological symbolism.” Burgher’s drawing “Eden Flag with solar-anal emblems and hexes” (2017) invokes the mystical qualities of abstraction, wishfulness and the intricacies of symbolism.

For the opening and closing of “Love the Giver,” tarot reader and astrologer, Alia Walston will offer tarot readings to visitors. She will also present a workshop on the nuanced potential of the fool archetype on April 1st. 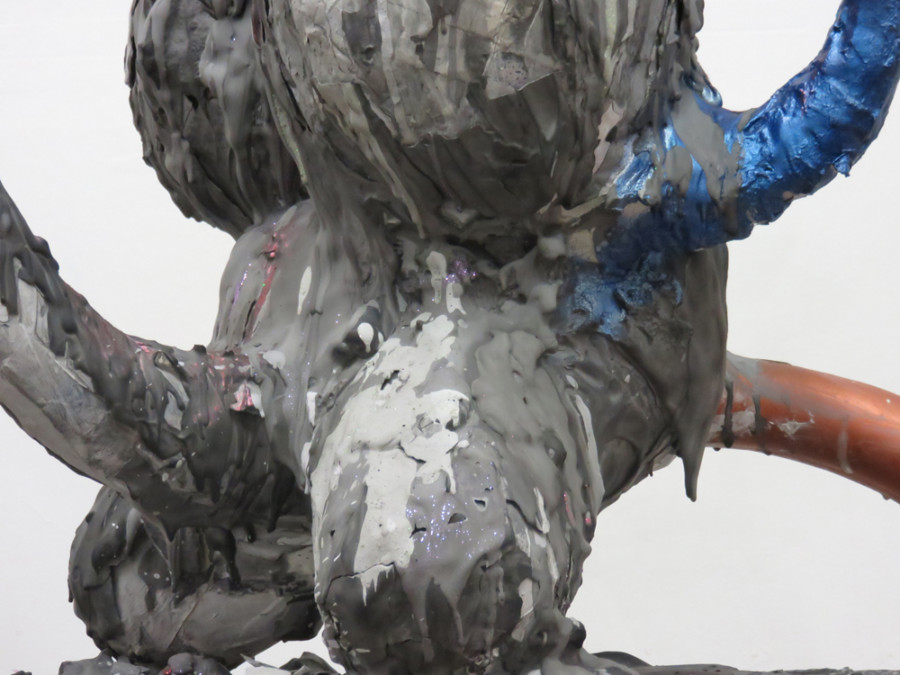