On view through Saturday, June 2nd

This will be the first monographic exhibition dedicated to an important yet little-known body of work bridging the gap between Cecilia Vicuña’s intertwined activities as a poet and visual artist. Vicuña’s “Palabrarmas” are visual anagrams made in exile in London and Bogotá after the Pinochet-led coup of 1973; they are reminiscent of the concrete poetry idiom that was reaching its critical apogee at the time. The exhibition’s centerpiece is a suite of drawings made after a trip across the Amazon in 1977, and originally intended for publication as a long-form visual poem in Colombia in 1978. Forty years after this cycle’s inception, it will finally see the light of day as a stand-alone publication on the occasion of its Chicago debut. The exhibition will also include banner-like works in cloth, remakes of art pieces that did not survive their debut as performance props in public space, and photographs documenting the various uses to which the Palabrarmas were put at the time. The titular neologism is a contraction of palabras (words) and armas (weapons), a nod to the spirit of militancy infusing so much progressive Latin American art in the era of juntas. Vicuña’s Palabrarmas, however, are also eruptions of color and sensuous pleasure—words as weapons that are also, more innocently, words to live by.

Cecilia Vicuña is a poet, artist, filmmaker and activist who has been based in New York City since 1980. Born in Santiago de Chile in 1948, Vicuña came of age in a time of great cultural ferment, making drawings and paintings that reflected the joyous revolutionary hopes of her era. Forced into exile after Augusto Pinochet’s coup against the democratically elected Socialist government of Salvador Allende, Vicuña moved to London and later Bogotá. It is during these nomadic years that she fine-tuned her so-called precarios—minute, ephemeral sculptures, fleeting thoughts captured in space—and made the pre-Columbian art of the quipu her own in signature immersive installations composed of fabric, thread and wool. These three-dimensional poems have a strong performative undercurrent that mines the living dialogue between image, word and deed, the ancestral and the avant-garde. The transience and intimacy of much of Vicuña’s work contrasts starkly with her recurring thematic concerns of cultural homogenization, ecological destruction, political agency and everyday utopianism.

A partial list of art institutions that have exhibited her work includes: the Museu de Arte Moderna do Rio de Janeiro in Brazil; the Museo Nacional de Bellas Artes in Santiago de Chile; the Institute of Contemporary Arts and Whitechapel Gallery in London; Art in General, the Drawing Center, the Museum of Modern Art and the Whitney Museum of American Art in New York; the Berkeley Art Museum; the Contemporary Arts Center in New Orleans; the Hammer Museum in Los Angeles; and the Institute of Contemporary Art in Boston. In 2017, her work was featured prominently in documenta 14 in Kassel and Athens, where two monumental site-specific quipu installations were shown alongside her agitpop paintings from the early 1970s. Vicuña is represented by Lehmann Maupin in New York, England & Co. in London, and Galeria Patricia Ready in Santiago de Chile.

Cecilia Vicuña has published twenty-two art and poetry books, including About to Happen (Siglio Press, 2017), Read Thread: The Story of the Red Thread (Sternberg Press, 2017), Kuntur Ko (Torn Sound, 2015); Spit Temple: The Selected Performances of Cecilia Vicuña (Ugly Duckling Presse, 2012); Saborami (ChainLinks, 2011), Instan (Kelsey Street Press, 2001) and Cloud Net (Art in General, 2000). Her Selected Poems is forthcoming from Kelsey Street Press. In 2009, she co-edited The Oxford Book of Latin American Poetry: 500 Years of Latin American Poetry. She edited ÜL: Four Mapuche Poets in 1997. She was appointed the Messenger Lecturer at Cornell University in 2015, an honor bestowed on authors who contribute to the “evolution of civilization for the special purpose of raising the moral standard of our political, business, and social life.” She is the 2018 Sherry Memorial Poet in Residence at the University of Chicago’s Program in Poetry and Poetics. 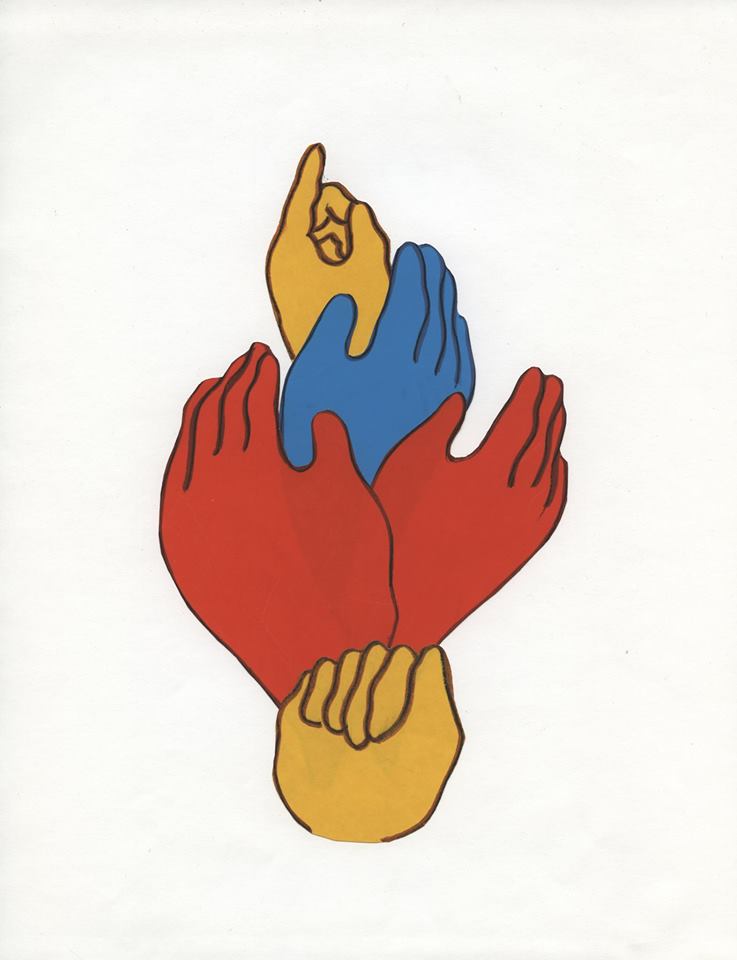