SONNENZIMMER
http://www.sonnenzimmer.com/
Sonnenzimmer is the collective work of artists Nick Butcher and Nadine Nakanishi. Their collaborative practice was established in 2006 in Chicago, Illinois. Initially recognized for their idiosyncratic commissioned screen-printed posters, their practice has since morphed into an interdisciplinary toolshed spanning multiple platforms, including exhibitions, publishing, performance, graphic design, and exhibition design. Equal parts balancing act between art and design and radical reclamation of all aspects of visual expression, the studio is grounded in the lasting potential of the graphic arts, while exploring the physical and conceptual friction between abstraction and communication.

TARA BOOTH
http://www.tarabooth.club/
Tara Booth is a 28 year old illustrator and comics artist from Philadelphia, currently based in Chicago. Her work has been featured in Bloomberg, It’s Nice That, and The Lifted Brow among other print magazines- but she’s probably best known for her content on Instagram.

JACOB CIOCCI
http://jacobciocci.org/
Jacob Ciocci (b. 1977, Lexington, KY) is a multimedia artist and musician. Ciocci is a founding member of the influential art collective Paper Rad whose work in the field of net.art––one of contemporary arts’ recent movements of the true avant-garde––helped ignite the genre, and is considered formative to a generation of younger artists whose works deals with the digital.

YEWON KWON
http://litlslaywon.com/
yewon kwon is a printer and publisher currently residing in chicago. in addition to printing and publishing their own works and being the press operator at perfectly acceptable press, yewon also curates, edits and prints the collective publication pallor pink. they also run an instagram of dog paraphernalia and desperately wishes they could wrestle on wwe tuesday night smackdown.

BEN NADLER
https://www.bennadler.ink/
Ben Nadler is an illustrator and cartoonist from Wisconsin living in Chicago. His debut graphic novel, “Heretics!” is out now from Princeton University Press, and his second book, “The White Snake” is out from Toon Books later this year. He self publishes the annual short story anthology “Sonder”.

SAM SZABO
http://brainbooger.tumblr.com/
Sam Szabo is a cartoonist from Massachusetts, currently based in Chicago. They have drawn comics in the past as well as the present, and they hope to someday draw comics in the future. Sam’s work can be found in the pages of “Vision Quest,” Rod + Cone Press’ “My Pace” anthology, various publications by the Sound Grounds Wreckin’ Crew, and dozens of their own self-published zines. Sam is currently at work on two graphic novels. One of the graphic novels is about Sam’s mother and the other graphic novel is one thousand pages long. 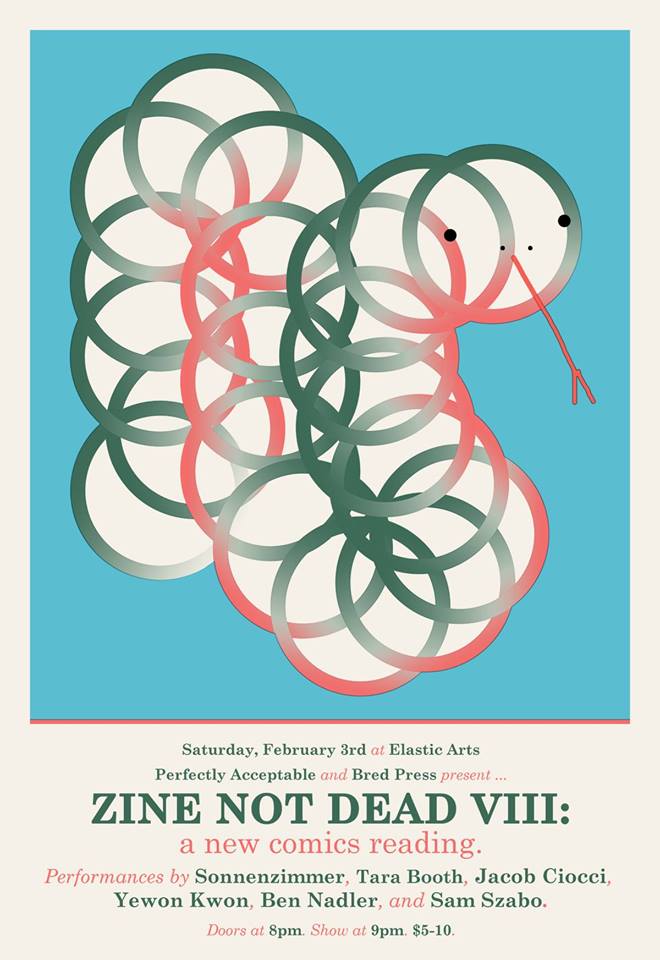