On view through Sunday, April 8th

A moment, stilled
Filtered through the warmth of sunlight
Among rustling leaves
Breath holds in the empty space where two edges meet
White and green, fluttering at the boundaries of vision
The house up on the hill
Calls through birches bathed in sunlight
A floating paradise
Tucked away into the safety of remembrance.

Tom Judd’s paintings bring an inner light to the modernist buildings he depicts, capturing each in dreamlike compositions that transport these structures directly to the canvas. Halfway between nostalgia and homage, Judd’s fondness for the subjects he paints echo through his images, present in his precise attention to architectural detail and the qualities of light. Using the grid as a means to invoke both the project of modernism and the space of architectural design, Judd’s buildings exist as tributes to the real structures they represent, suspended and unchanging in a world all their own.

Slater Sousley’s en plein air paintings transport us to a lively world of foliage and organic growth. These works immerse the viewer in a landscape defined by Sousley’s restless, painted gesture and his specific attention to natural light. Painted on his frequent camping trips, these compositions celebrate the beauty and atmosphere of nature as experienced by the artist in each moment. Depicted with care, each bush and branch Sousley paints leads us deeper into the maze of the beckoning forest.

Tom Judd’s focus on modern architecture goes back to the house he lived in when he was a child. The cars, architecture, scenes, and manner he paints are all attempts to describe what this 1960s vision of the future feels like today. Judd isolates his subjects to give them a dreaminess that rubs against their texture and age.

Tom Judd received his BFA from Philadelphia College of Art. Judd has exhibited his work in New York, Philadelphia, Chicago, Los Angeles, and Toronto. His work is in the collection of the Philadelphia Museum of Art.

Breaking form down into rhythm and pattern, while working quickly to capture light, Slater Sousley manages to achieve a vibrant serenity in his paintings. The way something emerges from the background of foliage questions how one technically and mentally renders an image. Painted against the setting sun, in the woods that Sousley knows from his childhood, the works reveal themselves as a merger of plein air painting and recitations of his past.

Slater Sousley received his BFA from the School of the Art Institute of Chicago in Painting. Sousley lives and works out of Kansas City, Missouri. 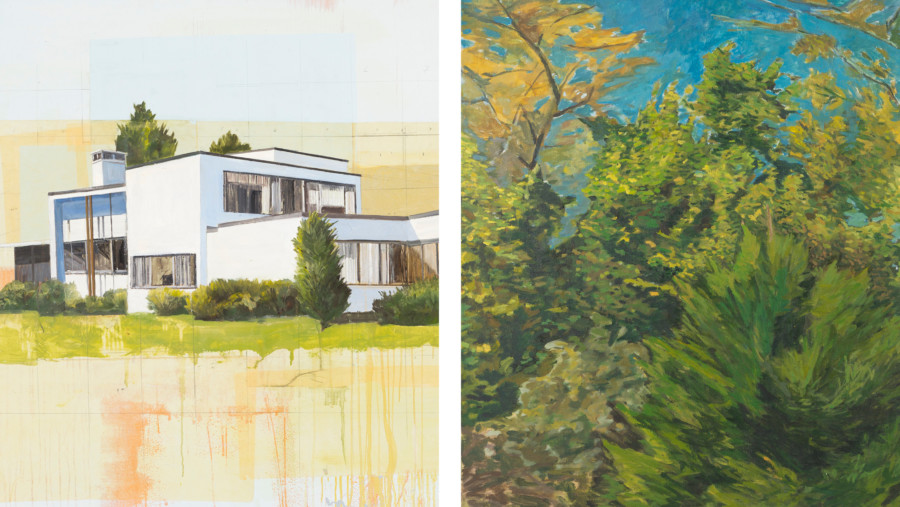