Please be considerate of the audience and subject-mater, The Learning Machine is a safe-space and anyone who acts otherwise will be asked to leave.

A reminder that from here on out, hopefully, we’ll be able to focus on 4 movies each month, (split between HUME on the north side and The Learning Machine on the south side,) centered within a specific time period/subject matter/theme/director/etc. Which also means more opportunities to catch the queer films considering everyone’s busy schedules!

This month we continue our journey through Hollywood films made after the elimination of the Hayes Code. We will be witnessing for the first time, explicit language and depictions of homosexuality in mainstream films. While this was a huge break through in LGBTQ history, unfortunately for our queer characters, this often meant their lives were met with tragic consequences as we shall see.

My goals for this series is to educate and spread awareness of films not normally sought out by the straight-cis world or even seen by LGBTQ folks who aren’t cinephiles themselves. Through-out the series, I hope for the audience to gain a greater understanding about the outside forces that suppressed our community for so long (and who continue to do so) and how despite everything, LGBTQ characters continued to appear and eventually break-free of their oppressive hollywood/moralist shackles.

Although for many decades, LGBTQ characters were not shown under a flattering lens and were often sad, suicidal or murderous people, I will do my best to showcase the rare instances of characters being able to take some positive ownership of their sexuality in addition to the darker more “problematic” films.

Also, due to how western society works as well as the distribution of wealth and technology, the majority of the films, at least through the 1970s will also mostly be cis, white and male, but rest assured that there will be more diverse films as the series comes along. I hope to have a few “specials” in-between the chronological order we will be watching the films in in order to break things up; including documentaries on LGBT historical/popular figures and films that are Queer-Coded starring LGBTQ icons.

While I don’t have a background in film/LGBTQ history, this is a passion project and I’m doing my best to read-up on as much LGBTQ film theory/history as I can and will be happy to moderate discussion after the films have been shown every evening!

“The Killing of Sister George” (1968) Directed by Robert Aldrich, based on the 1964 play by Frank Marcus. In the film, an aging lesbian television actress, June “George” Buckridge, simultaneously faces the loss of her popular television role and the breakdown of her long-term relationship with a younger woman.

“Victim” (1961) Directed by Basil Dearden. In early 1960s London, barrister Melville Farr is on the path to success, with his practice winning cases and a loving marriage to his wife. However, when blackmailers link Farr to a young gay man, everything Farr has worked for is threatened. As it turns out, Farr is a closeted homosexual which is problematic, due to Britain’s anti-sodomy laws. But instead of giving in, Farr decides to fight. 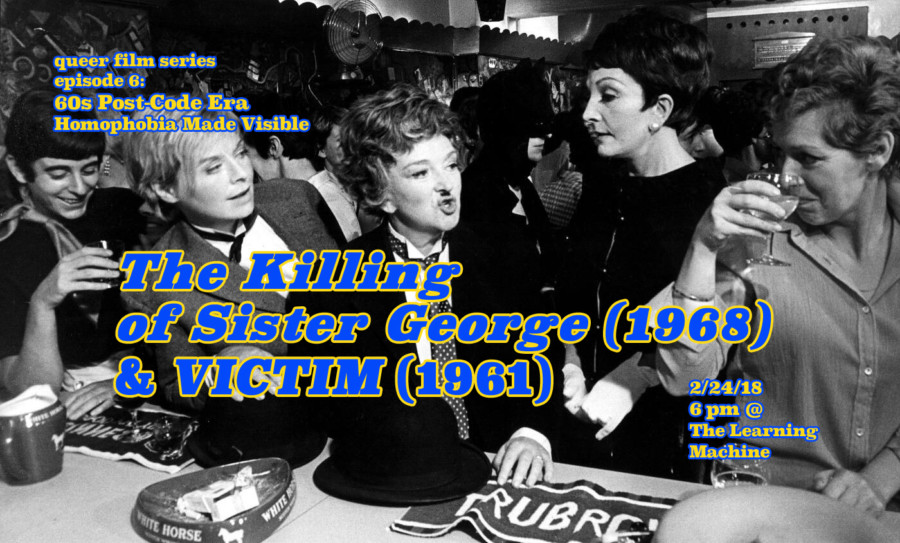