The Poster Art of Scott Williams, A Soul Summit Retrospective

On view through Wednesday, January 31st

Scott Williams is a Chicago-based graphic designer who has been making things around town a little more beautiful since 1996. He’s created numerous show posters for the Annoyance Theatre, I.O. and the Second City in support of Chicago’s talented comedy and improv community. For the past 10 years, Scott has been designing gig posters, and has been commissioned by artists including Sharon Jones & the Dap-Kings, Black Joe Lewis & the Honeybears, Charles Bradley & His Extraordinaires, JC Brooks & the Uptown Sound, JD McPherson and Numero Group. Scott is also a part of Soul Summit—a three-man DJ collective that hosts a monthly dance party at the East Room in Chicago’s Logan Square neighborhood. As Creative Director for Soul Summit, he creates a fresh poster for each and every Soul Summit dance party and has done so for the past 8 years. On January 27th Soul Summit will be celebrating 8 years with special guest DJ Maseo of De La Soul.

All Star Press is excited to present over 50 posters designed by Scott “Sloppy White” Williams that carry forth Soul Summit’s journey through their eight year anniversary contribution to the soul music community. The Retrospective runs January 13, 2018 – January 31st, 2018 and is designed and curated by Scott Williams. 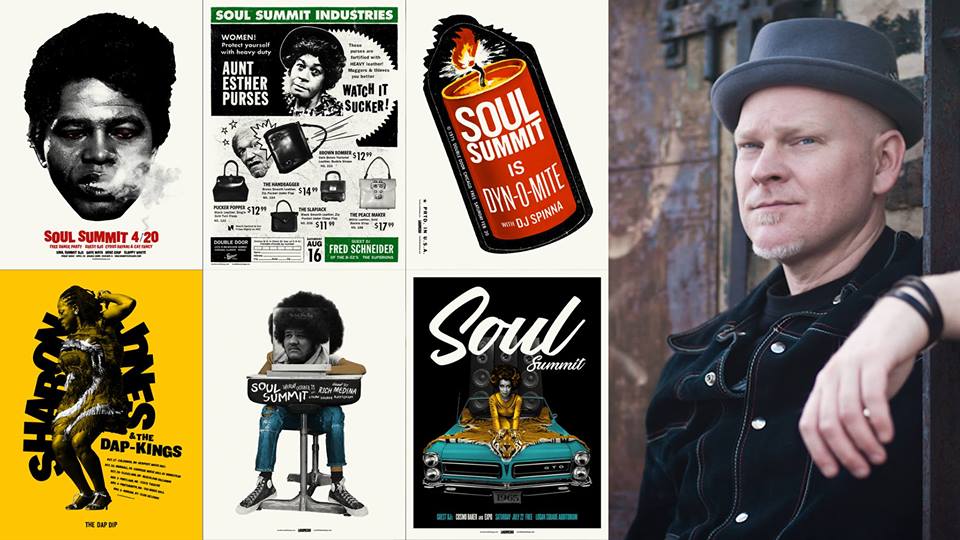