On view through Friday, January 26th

Pseudo- & Hetero-, the respective prefixes for two literary terms, pseudonym and heteronym, will frame the dialogue between Tao Hui and Barry Doupé and open on January 12th, 2018. While a pseudonym, literally meaning a “false name” in Greek, is a pen name adopted by an author; a heteronym, in literature, defined and developed by Portuguese writer and poet Fernando Pessoa, is a separate identity invented. Under a pseudonym the author is still himself as he writes, whereas for a heteronym, the author excused himself for a fictive writer who lives and writes independently. Surpassing the mere change of “nym” (name), Pseudo- is a temporary existence, a part-time alter ego with a disparate appearance, gender, and belief. Hetero-, in reverse, bifurcates, multiplies, and dissolves into different and distinct identities.

In Tao’s videos Talk About Body (2013) and The Dusk at Teheran (2014), the self takes up a proactive presence under a pseudo identity. In Talk the artist himself, dressed in the attire of an Islamic woman, describes his body parts in anatomical terms to a silent crowd in a bedroom. The appearance of an Islamic woman enwraps but does not conceal the protagonist and his speech. Dusk reenacts a real speech––a lamentation about missing out marriage and family––by Hong Kong singer Anita Mui at her farewell concert, a month before her death of cancer, through an Iranian woman in a cab on her way home. The shift of speakers from an ill, middle-aged woman who owned a successful singing career, to a vital, young woman who is prohibited by law to perform in public, enhances the intact content of the same speech.
In Doupé’s computer-animated films, The Colors that Combine to Make White are Important (2012) and Ponytail (2008), the characters live on the contingencies of automated animation cycles and the text-to-speak converter that translates the artist’s streams of consciousness into foreign languages. The artist’s authorship is taken over by his characters who, as the film progresses, begin to explore themselves and achieve heteronymous identities. There is a constructed world in both works from which the insider cannot escape and to which the outsider, the creator and the viewer, have no access.

The opening reception of Pseudo- & Hetero- on January 12th at 6PM will also feature a lecture performance of Maryam Taghavi.

A full screening of Doupé’s The Colors that Combine to Make White are Important (2012) will be held a week later on the January 19th.

Barry Doupé (b. 1982 Victoria, BC) is a Vancouver based artist primarily working with computer animation. He graduated from the Emily Carr University in 2004 with a Bachelor of Media Arts majoring in animation. His films use imagery and language derived from the subconscious; developed through writing exercises and automatic drawing. He often creates settings within which a characters’ self-expression or action is challenged and thwarted, resulting in comic, violent and poetic spectacles.His films have been screened throughout Canada and Internationally including the Vancouver Art Gallery (Vancouver, BC), the Art Gallery of Nova Scotia (Halifax, NS), Ann Arbor Film Festival (Ann Arbor, Michigan), International Film Festival Rotterdam (Rotterdam, the Netherlands), Anthology Film Archives (NY, New York), Lyon Contemporary Art Museum (Lyon, France), Pleasure Dome (Toronto, ON), MOCCA (Toronto, ON), Whitechapel Gallery (London, UK), Centre Pompidou (Paris, France) and the Tate Modern (London, UK)

Maryam Taghavi is a Tehran-born artist currently living and working in Chicago. She makes photographs, installations, videos, publications, and performances that are characterized by their ephemeral nature. She graduated with an MFA in Performance from The School of the Art Institute of Chicago where she was the recipient of the New Artist Society Scholarship. She has performed and exhibited at venues such as Queens Museums in NY, LAXART in LA, Ex Teresa Museum in Mexico City, Xpace in Toronto, and Sazmanab in Tehran.

LITHIUM is a Chicago newborn, a gallery space collectively created by four anonymous SAIC alumni. LITHIUM is in favor of thought-provoking audiovisual art that includes duration as a dimension and unfolds over time.
LITHIUM
1932 S Halsted, Suite 200
Chicago, IL 60608
lithium.gallery
info@lithium.gallery
Sat 1-5pm, or by appointment 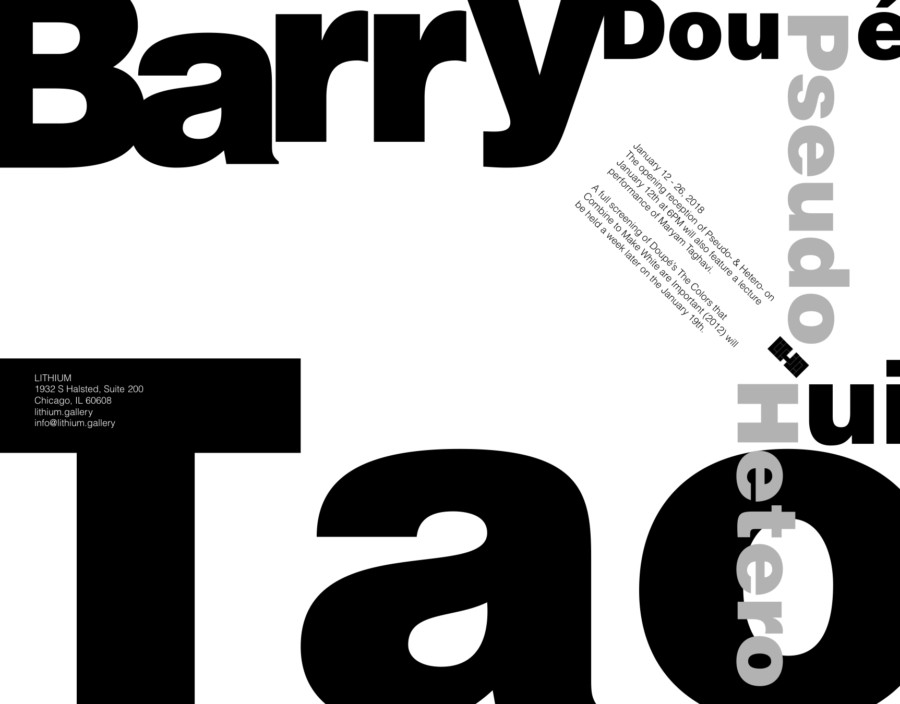