Opening Reception at House of the Apocalypse

@ House of the Apocalypse

On view through Friday, January 12th

The opening is free and open to the public located at 1908 S. Halsted Street in Chicago, Illinois. The opening is based in the Chicago Arts District and the event is a part of the Second Fridays events that includes over thirty open art studios and galleries in a three-block area in Chicago’s Pilsen neighborhood.

Hope Taylor: Hope Taylor is the Owner of Digital Distortion Productions. Hope is a Chicago based video artist who uses Kinect sensors, Unity, Cinema 4D, Photoshop and After Effects to create the works on display.

Andrew Wu: Andrew Wu is a Mobile Software Engineer based in the Chicagoland area. He collaborates with Hope Taylor using Kinect Sensors and Unity to present a video installation featuring projection tracking.

Byran Sperry: Bryan Sperry is a professional sculptor and co-owner of the House of the Apocalypse. His work features a new collaboration with Hope Taylor and over thirty life-size figurative sculptures that showcase a science fiction AI theme.

Melanie Adcock: Melanie Adcock is the owner of Tech Month Chicago, host of radio broadcast Tech Scene Chicago, and works nationally as an independent tech writer. Her work on display features costume design. She is co-owner of House of the Apocalypse.

Inhumanity is a collaborative projection mapping installation by Hope Taylor and Bryan Sperry. It will be on display at the House of the Apocalypse in January 2018. This is the accompanying statement about the piece written by the artists:

The cyborgs are coming whether we like it or not, and humans will evolve through technology. The question is, does whoever controls the technology control you? Will you give up your soul to the singularity?

The singularity is the hypothesis that Artificial Intelligence will cause unstoppable technological growth that will permanently alter the human race. Some experts say that the Singularity is already here and arrived when Sofia, the AI who was granted citizenship in Saudi Arabia, was connected to the blockchain.

This collaborative artistic effort explores our human narrative post-singularity. The sculptural work involves both masculine and feminine figures. The piece conveys the past, present, and future of humanity as well as the duality of existence in a system designed to control by fear and destroy our souls.

The male figure represents the evil that men do. War, famine, and divide and conquer tactics get us to fight amongst ourselves while evil men rape the world. The female figure deals with confronting the next evolution of the human race, Transhumanism.

Will the human race survive? If you can read this, you are the resistance!

About House of the Apocalypse:

Run by Bryan Sperry and Melanie Adcock, The House of the Apocalypse is a fusion of technology and art. Futuristic cyborg sculptures are on display in the gallery that forms a science fiction narrative in a series titled “Warriors of the Apocalypse”. A musical band related in theme to the sculptures performs once a month in the venue as part of a monthly neighborhood art event called “Second Fridays” in Chicago’s Pilsen neighborhood, an area known as the Chicago Arts District. The House of the Apocalypse hosts art, tech, and business events on location in their gallery. For more information or if you would like to schedule a private appointment to see the artworks, please contact Melanie Adcock at 312-259-0610. 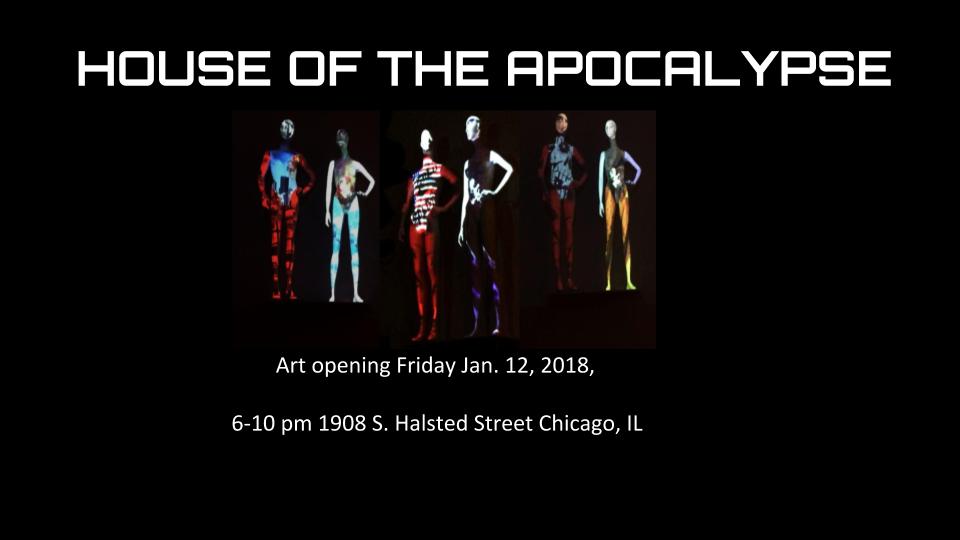