Melissa Leandro: Trop-i-cal and Lindsay Rhyner: Eye of the Needle

Efrain Lopez Gallery is pleased to present Melissa Leandro: Trop-i-cal and Lindsay Rhyner: Eye of the Needle. These exhibitions will be on view until March 3rd.

Efrain Lopez Gallery is delighted to present Trop-i-cal, the gallery’s first solo exhibition with Miami-born, Chicago-based artist Melissa Leandro. Trop-i-cal opens Saturday January 27 from 5-8 pm, and will be on view until March 3.

Though Melissa Leandro hand-weaves her textiles, her process in arriving at her end product is unsentimental: holes cut into certain Jacquard weavings are patched with fragments of others, sutured together with bold embroidery. Bright and neon colors recall the tropical palettes associated with both Miami and Costa Rica, which Leandro and her family have in the past respectfully called home. The works’ sunny hues belie the melancholic sense of dislocation and removal that informs them. The objects which Leandro’s motifs approximate are not immediately recognizable, and in the case of her cyanotype, “sun prints” are literal traces of since-discarded objects, their contours preserved in the ghostly shades of the solarization process. This process of culling certain objects while simultaneously preserving their memory and transmuting their meaning parallels the dynamics of communicating with long-distance loved ones. Cyanotypes produced per Leandro’s request by her father and mother are translated into patterns for her textiles, and care-package contents guiltily purged in clutter-reducing efforts are immortalized in her designs. In their passage through the post between Leandro and her parents, and in their at once tactile and ephemeral impressions her camera-less photography, Leandro’s objects and images traverse the gaps in time and space that separate generations of family from one another, and the children of immigrants from a motherland both longed-for and unfamiliar.

Trop-i-cal includes wall-mounted textiles as well as plastic and vinyl works that flow over low-lying plinths and onto the floor, rejecting the vertical rigidity of traditional forms of two-dimensional image making in favor of an enveloping installation that insists viewers remember the mundanity of textiles at the same time we recognize the works’ singularities. Through heat-fusing domestic materials, like plastic and vinyl, Leandro twists assumptions on how we perceive kitsch imagery, and cheap domestic materials. Plastic printed tablecloths of enlarged flowers, dollies, fruits, birthday balloons, combine with black rubber, ric rac, and lace, to develop new hybrid landscapes. These printed plastics, often used for cheap décor in the home have the ability to take on a different cultural status that disconnects them from their intended function.

Melissa Leandro (b.1989, Miami, US) lives and works in Chicago, IL. She received a BFA in 2012 and a MFA from the School of the Art Institute in 2017. Melissa has exhibited at galleries and institutions including The Chicago Cultural Center, Andrew Rafacz Gallery, Chicago Artist Coalition, Wright Museum of Art. Beloit College, Efrain Lopez Gallery, Arts Incubator at the University of Chicago, The Arts Club of Chicago, among others. In 2016, Leandro was included in the International Young Textile Art Triennial at the Central Museum of Textiles in Łódź Poland and was awarded the Toby Devan Lewis Fellowship in 2017. Melissa Leandro is a current BOLT resident at Chicago Artists Coalition and LuminArts Fellow for the Union League of Chicago. In the fall of 2018 Leandro will present a solo exhibition of new work at Chicago Artists Coalition in Chicago, IL.

Efrain Lopez Gallery is delighted to present Eye of the Needle, the gallery’s first solo exhibition with Minneapolis-based artist Lindsay Rhyner. Eye of the Needle opens Saturday January 27 from 5-8 pm, and will be on view until March 3.

Lindsay Rhyner incorporates the detritus of discarded textiles and the flotsam left in the trail of consumer capitalism into ambitious, optically challenging compositions. Skillfully blending angular and organic forms to produce heroically-scaled, asymmetrical patterns in strikingly contrasting hues, Rhyner flummoxes the viewer with a sense of simultaneous movement and two-dimensional stasis, as reminiscent of traditional “falling block” quilt patterns as they are of the jarringly pixelated space imposed on the players of video games. Digital imagery–at once hyperflat and enveloping–is necessarily produced at a remove from the body of its maker. Paradoxically, Rhyner achieves similarly dislocating effects through painstaking and repetitive means, hand-stitching each work in its entirety. Heedless of the rules of Western linear perspective, her vertiginous depictions of illogical space are further reminiscent of the coexistence of detailed form and stark emptiness found in ink paintings in Chinese and Japanese traditions.

The repurposing of discarded materials is important to Rhyner, who absorbs the quickly-digested textiles of “fast fashion” and the epidemic of plastic waste that defines the anthropocene into works that teem vibrantly with multiples of objects as banal as individual flossing picks. Motifs and materials that have historically served as the antipodes of “good taste,” including anthropomorphized cartoon animals and black velvet, are converted into designs of unironic elegance. An inveterate traveler, she garners inspiration and gathers materials from locations across the globe. In the anonymous makers who designed commercial textiles as well as those who embellished or fabricated others by hand, Rhyner acknowledges the many collaborators whose identities she will never know.

Lindsay Rhyner (b.1981, Rochester, Minnesota, US) lives and works in Minneapolis, MN. While her formative years included studies at the University of Wisconsin, Madison as well as the Perpich Center for Arts Education (Golden Valley, MN), Rhyner is largely self-taught. Her recent and upcoming exhibitions include solo shows at the Minneapolis Institute of Art and Seen the Future Gallery (Minneapolis), and group exhibitions at Public Functionary (Minneapolis) and the Phipps Center for the Arts (Hudson, WI). In 2015, Rhyner was awarded a Fellowship for Emerging Artists through the Jerome Foundation 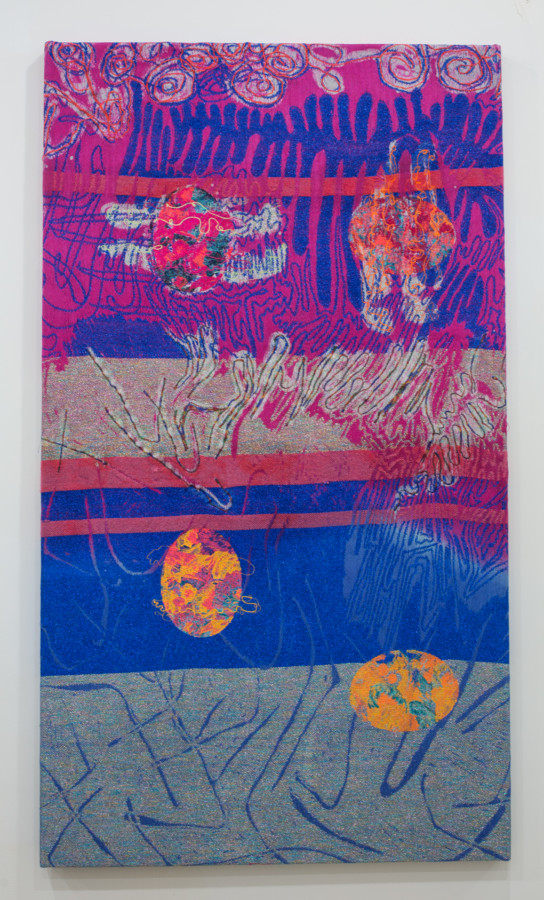