On view through Saturday, February 3rd

For both of these talented and prolific artists, materiality and its unpredictable nature marks a personal passage to an astonishing artistic practice that is both physically and mentally demanding. Whether it be Finzi’s catalytic reaction of resin and hardener or Capuano’s unforeseeable kilns firing, both artists tempt their fate to the alchemical qualities of their medium. It is here, in this place of failures, accidents, and creation, that each artist finds wild magic and a narrative that is truly their own. For Finzi, the resin’s uncontrolled nature and its power to fossilize paint illustrates and resonates with the life of Frida Kahlo, an icon whose own untamed spirit continues to anneal itself to our own collective culture. In the same vein, Capuano’s sculptures seek to amalgamate found objects with his own clay creations, exploring the ceramic process by which the material is manipulated and which often involves multiple attempts at firing, glazing, and assembly. Each sculpture manifests a visual language that references his own artistic evolution and spans over 40 years of craftsmanship.

Frida Kahlo knew how to serve face. Her face expressed the feelings of a generation, and she lived in a time when her face was needed. Wild with metaphor and mythology, Kahlo’s face burns into the present reality.

Kahlo’s whole life was wrapped up on her face. It contained an encyclopedia of symbols. Avid self-documentarian, she could maneuver her face-image into a persona, pivot it toward power. Kahlo’s face was an interface for her entire psychology, her body, limbs, feelings, womb. So it was foolish when a New York Times exhibition review in 1938 insulted her self-portraits as “more obstetrical than aesthetic.” Anatomy was her tragedy but she was never a victim to it. Polio as a child and then later the horrific bus crash. She underwent thirty surgeries in her short life, several miscarriages, and endless bodily pain. Then she died young. Kahlo wanted to be a doctor and she began studying medicine but the accident cut her schooling short. She would have to lie in bed, be a patient. In the mirror above her bed, she found her greatest specimen.

Kahlo leveraged her face. She understood it was more than just a random constellation of creases and wounds. On one hand, yes, she knew that faces are abstractions like flowers or music, but even in their arbitrary biomorphic configurations, faces mean something. Celebrity faces, mother faces, muse faces. There are faces we don’t forget, physiognomic geometries that generate reverence, longing, and joy.

She was androgynous, disabled, and desirous. She played up her brown skin tone in paint, a kind of makeup to accentuate indigenous values she admired, identified with, and projected. She painted her pain and the drama of life, but above all she painted self after self, and invented herself through painting.
She fashioned herself an outsider yet an international modernist; a cultural progressive as a Mexican revolutionary participating in the Mexican Renaissance; an immigrant and the colonized; of mixed European, Jewish, Mexican heritage. Her face opened up the possibility that one can be many things, that identity is not a pure, unmixed material. She is probably one of the first global art celebrities to embody a post-racial role as modern-woman-of-many-faces.

Finally, Kahlo knew the sideways glance of eternity, against death. After all, faces are people too, they’re not just paintings. Posthumously, Kahlo’s magnetism is so robust that even some of her admirers are famous in their own right, celebrated for the intensity of their admiration. Kahlo’s portrait photographers were artists. They knew how to perform her. In this tradition, Eric Finzi aims to extend Kahlo’s spirit and keep her in the circulation of existence. Every new painting is a chance for Finzi to put his hands into the cosmic goo and reanimate the spirit of Goddess Frida. He creates a renewed Kahlo using resin— a translucent substrate of DNA for Finzi’s revision of beautiful Saint Frida. Finzi wants to heal her.

Finzi’s paintings of Kahlo are Kahlo and they are not Kahlo. We recognize some famous poses, like Frida with the revolver, Frida with a pet bird, and then Finzi departs into historic fiction. He invents new settings for her to inhabit, new jewelry to wear, a new body. “This isn’t a historical exhibit,” says Finzi. In her pallor she is nearly anonymous, pushed to a boundary of abstraction whereby some of her key features must signal her entirety: unibrow, man’s suit, piercing eyes. Finzi has to decide which of these essential qualities will identify to the viewer that she is Frida. Frida-not-Kahlo. Eric reveals her image behind a painting effect, a flattening tool, the contour line of fame, the mask of Marilyn, Garbo, and Kahlo. Frida’s face is blank as a cinema screen, ready to receive, yet lurid as a memory before one blacks out after tequila. The last face you remember before you lose consciousness and the world fades to glassy white. The face that replays like flickering film footage in your mind.

Further departing into surrealism, Finzi asks his materials to have a life of their own. He injects the resin with pigment. The tints swirl like smoke and harden like that under resin, a kind of immortality. The artist respects the pre- consciousness of his materials, their intelligent gravity and color chemistry, so he gives them a framework to play within and to develop voice. He allows his materials to meander and then congeal into a new degree of Frida, a layering of dimensions, a speculation of life had she more seconds to live. With these materials, chance accidents are allowed if they are creative and not destructive. Finzi’s color hues are expressive and imagined. Frida was also always pursuing this new way of being.

Artist Philip J Capuano’s “Ceramic Perspective,” is part two of a 40-year retrospective exhibition at Linda Warren Projects (part one took place in February of 2015). Spanning two gallery spaces, the artist will showcase predominantly ceramic sculptures that have been part of his artistic practice throughout his career. His love for the medium has traversed a lifetime of epic battles. From the knee-high-snow of the Adirondacks of New York, where the artist built his own cabin and kiln, to the ceramic studios of south side Chicago where he meticulously and patiently repaired old sculptures. Capuano has wrestled legendary fires that birth his visionary sculptures. Inspired by his prophetic dreams and real life events, these metaphorical artworks stand in for and narrate Capuano’s many extraordinary lives, some of which include: competitive weightlifter, semi-pro baseball player, and professional astrologer. His astonishingly persistent and prolific practice incorporates functional and sculptural ceramics with found objects. Capuano’s affinity for the tchotchkes and vernacular ephemera of the world around him imbues his work with an “outsider” kind of aesthetic, though the “intuitive” nature of his pieces is balanced with highly trained, impeccable technique. His unwavering devotion for the medium continues to inspire, captivate, and inform his practice. Capuano embodies the true nature of fire…unpredictable, fierce, and rebellious. 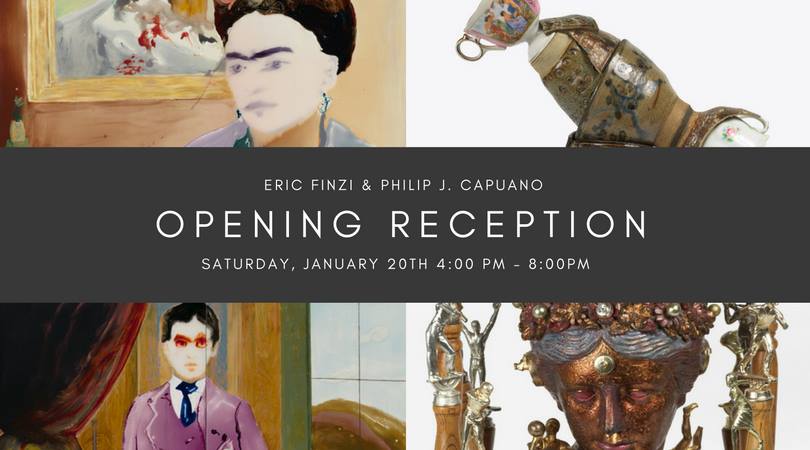