Carrie Secrist Gallery is pleased to announce ALTER EGO, our fourth solo exhibition with Berlin-based gallery artist Andrew Holmquist. Holmquist’s newest body of work is composed of two distinct but intertwined bodies of work: his Strong LQQks series of works on paper and ceramic sculptures. Presented in a dynamic installation, this exhibition examines the lengths to which the concept of figuration can be pushed, pulled, built and deconstructed.

Each individual work of art in ALTER EGO represents a fantastical character that serves as an extension of the artist’s persona. The myriad of personalities may be considered as alter egos or super heroes projected through the guise of costuming, suits of armor, kinky fetish wear or any other realms of possibility. Placed in concert with each other, the cumulative effect of these drawings and sculptures both reveals and disguises the archetypes offered up for consideration by Holmquist. This installation is designed as a moment, frozen in time, that might exist between a chorus line and the front line of a battalion. The viewer’s role then is to bear witness while participating in a ceremonial review of this cast of protagonists that may appear static, but who on further inspection are playful, experimental and improvisational.

We are very excited to present the continuation of Holmquist’s long-running series Strong LQQks. These works on paper are presented in the three formats: extra large drawings (6½ feet tall by 4½ feet wide), medium–sized in a grid of characters and a recently completed suite of three-color lithographic prints. Using abstraction as a medium in and of itself along with a myriad of more traditional tools for mark making, these works continue a lineage of the art historical canon (Willem de Kooning, Kitagawa Utamaro, David Hockney and Francis Bacon) while injecting a contemporizing queer update. As such, wrapping the figures of these bodies in abstraction blurs their gender while powering them with the special skills they need to serve humanity in an alternative physical world, dressed to kill. The strength of these drawings is their depiction of mutability, moments of transformation and shifting shape. This is achieved by interweaving the tropes of figuration and abstraction while celebrating transforming bodies and gender ambiguity.

Situated in the middle of the gallery space will be a large grouping of vibrant mono-chromatic ceramic sculptures. Calling to mind classical Greek and Roman sculpture as well as the futurist Umberto Boccioni with hints of mecha anime, these forms are imbued with a formal structure while maintaining an air of organic suggestiveness. These three-dimensional objects take the tension that exists between the abstract and figurative a step further by introducing architectural components both as a means of functionality and artistic form. The presentation of the sculptures on varying sized plinths, which are placed on a large swath of sunbeam yellow flooring, mimic the vanguard of tactical formation of Alter Egos which form a mythical futurescape – creating a visceral experience that is magnetic and revealing. 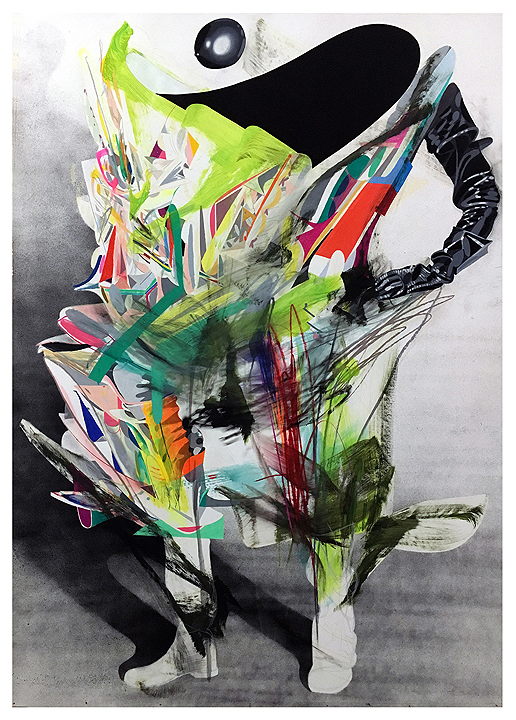