Please be considerate of the audience and subject-mater, HUME is a safe-space and anyone who acts otherwise will be asked to leave.

Bring your friends!!
BYOB and BYOP (Bring your own pillow for comfort!!)
—–

A reminder that from here on out, hopefully, we’ll be able to focus on 4 movies each month centered within a specific time period/subject matter/theme/director/etc. Which also means more opportunties to catch the queer films considering everyone’s busy schedules!

This month we’ll continue our journey through Hollywood films made during the Hayes Code era, the first installment focusing on male/male gaze and an introduction to gay male authorship through experimental short films and the queering of traditionally male/masculine pastimes and roles. Our second installment will be focused on two Hitchcock directed films featuring male relationships with plenty of coded language and homoeroticism.

“Un chant d’amour” (“A Song of Love”) (1950) Short directed by Jean Genet, two prisoners in complete isolation, separated by thick brick walls, and desperately in need of human contact, devise a most unusual kind of communication.

“Fireworks” (1947) Short directed by Kenneth Anger, a dream about the brutal rape and torture of Anger himself (as a teenager) by a group of sailors on the street (after trying to pick one of them up).

“Scorpio Rising” (1963) Short directed by Kenneth Anger, a gang of bikers make their engines roar and ride their way to pain/pleasure as sexual and sadistic symbols are intercut into the dazzling chaos and rhythmic experience of this cult underground film.

“Rebel Without a Cause” (1955) Directed by Nicholas Ray, a rebellious young man with a troubled past comes to a new town, finding friends and enemies. 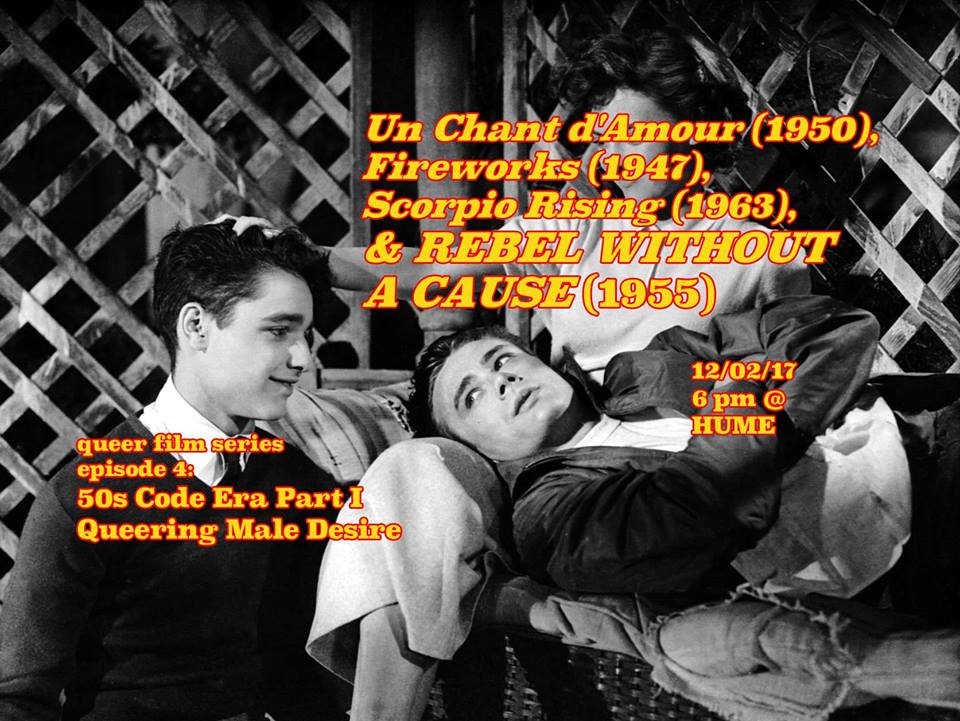