On view through Sunday, December 24th

Theo Chin is a video artist living and working in Chicago. He received a BA in Illustration from Camberwell College of Art with 1st Class Honours, and is currently an MFA candidate at the School of the Art Institute of Chicago in Film, Video, New Media, and Animation.

Anneli Goeller lives and works in Chicago and New York. She is an MFA candidate at the School of the Art Institute of Chicago and received her BFA with honors from Parsons The New School for Design. Using new media, Goeller probes the virtual and physical divide and seeks to expand the dichotomy between corporeal and digital bodies while highlighting the potential of digital space as a queer arena. Her work has been exhibited internationally at The Wrong – New Digital Art Biennale, Sheila C. Johnson Design Center, Greenpoint Open Studios, Gallery MC and A.I.R. Gallery, in New York, Peripheral Forms in Portland as well as the Palazzo dei Cartelloni in Florence, Italy.

Jillian Musielak will receive her MFA from the Film, Video, New Media and Animation department at SAIC in May, 2018. She also studies language, specifically, new ways to talk about art and emotions. Active on the DIY circuit, she has exhibited at Archer Beach Haus and House of Heavy Petting in Chicago as well as Roman Susan and ACRE TV. She has toured the US as one half of “Potions” providing visuals for his music at venues such as Cairo in Seattle; Xhurch in Portland, Oregon; the Basement in San Francisco, Life Changing Ministries in Oakland, California; and Glob in Denver, Colorado. Musielack is currently Graduate Collections & Media Assistant at The Video Data Bank at SAIC. She lives in Pilsen with her partner and their two cats. She says, “Hi!”

Amanda VanValkenburg is a visual artist using a combination of traditional and digital techniques. She received her BFA in Painting/Drawing /Sculpture at Brigham Young University, studied digital media at Hochschule für Künste Bremen, and received her MFA at the School of the Art Institute of Chicago in Film/Video/New Media/Animation. Her work has been exhibited at the MCA, Elmhurst Museum, Mana Contemporary, Woman Made Gallery, 6018 North Gallery, LeRoy Neiman Center, and screened at the Gene Siskel Theater, Nightingale Cinema, Links Hall, Filmfront, and the Chicago Digital Media Festival. She was recently a High Concepts Labs sponsored artist and an artist in residence at Ox-Bow School of Art, and expected to complete a residency at Ragdale in 2018. 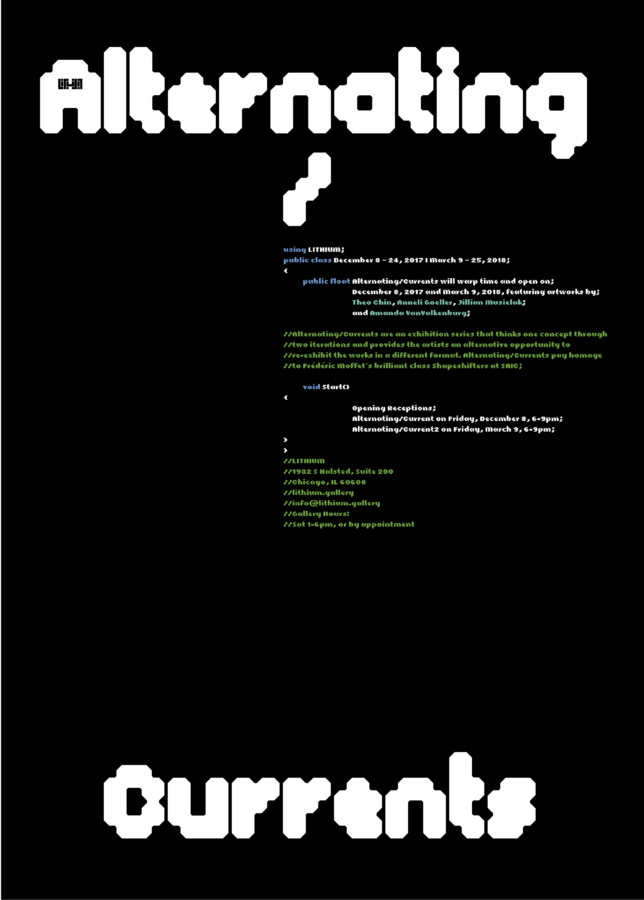