These performances cast a line that measures and marks the distance of a voice, which is also the distance between artist and audience. One artist will invite audience to be a part of the work, by synchronizing certain physiognomic movements of singing; one will divide into a trio and, though maintaining a physical space, surround audience with voices that reminisce, reason, and repent; and one, who is a little shy, will choose to stand further back and direct the audience’s attention towards shifting images.

Maryam Taghavi is a Tehran-born artist currently living and working in Chicago. She makes photographs, installations, videos, publications, and performances that are characterized by their ephemeral nature. She graduated with an MFA in Performance from The School of the Art Institute of Chicago where she was the recipient of the New Artist Society Scholarship. She has performed and exhibited at venues such as Queens Museums in NY, LAXART in LA, ExTerressa Museum in Mexico City, Xpace in Toronto, and Sazmanab in Tehran.

Joseph Demes (DL # D9947988) was born on March 22nd, 1991, in Clayton, CA, and is registered to operate a class-C vehicle. He is a male human with brown hair, hazel eyes, standing at 5 feet and four inches and weighing 125 lbs. He has been called “just different enough without being annoying,” and has performed minor works in basements, fancy ballrooms, and homey living rooms. His major works are indefinitely forthcoming.

Sammi Skolmoski is the Managing Editor at Featherproof Books and on faculty at SAIC and Roosevelt University. She is a regular contributor to Reductress and The Hard Times. Born/lives/likely dies in Chicago.

LITHIUM is a Chicago newborn, a gallery space collectively created by four anonymous SAIC alumni. LITHIUM is in favor of thought-provoking audiovisual art that includes duration as a dimension and unfolds over time. 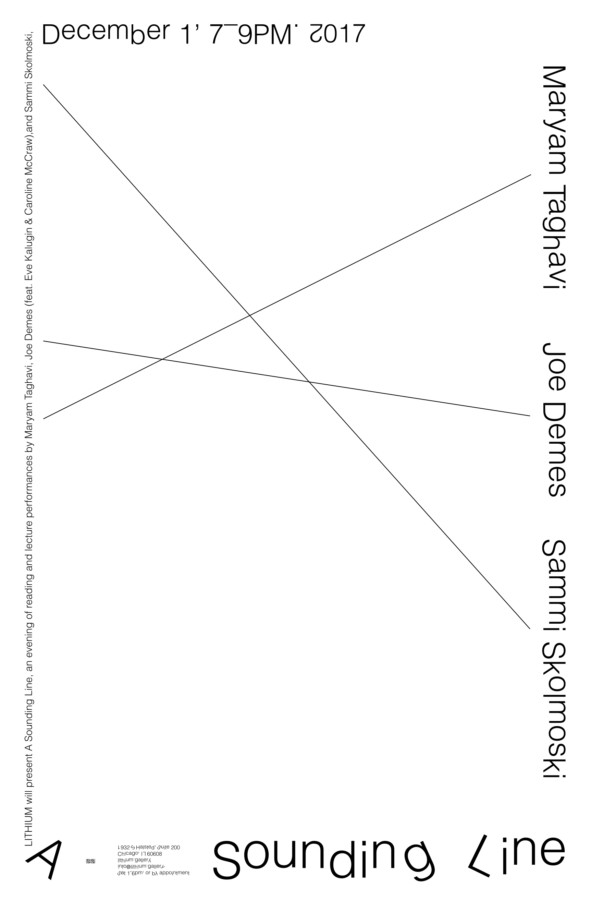