Sarah Schulman is a novelist, nonfiction writer, playwright, screenwriter, journalist, and AIDS historian. She is the author of 18 books, most recently the novel The Cosmopolitans (The Feminist Press at CUNY, 2016), which Publisher’s Weekly called one of the “20 best American novels of 2016.” Her book Conflict is not Abuse: Overstating Harm, Community Responsibility, and the Duty of Repair (Arsenal Pulp Press, 2016), was called “awesome brilliance” by bell hooks and is the winner of the 2017 Publishing Triangle Award. “Her writing constantly intervenes, but always seeks to initiate new discussions rather than joining old ones. Schulman’s is a literary-activist practice of remarkable elasticity: she continually demands a new world through creative engagement, and fills in the gaps as she goes,” describes Josephine Livingstone of the Guardian. 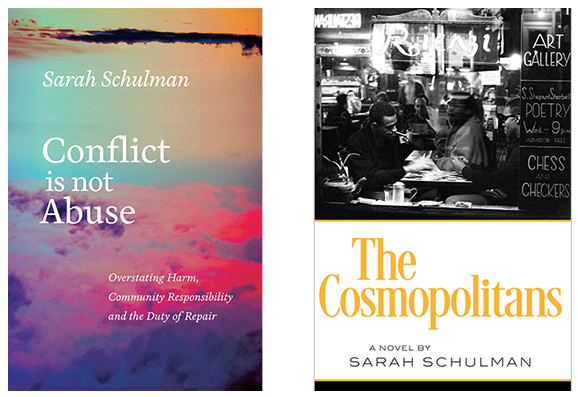