On view through Thursday, October 19th

From October 13 through 19, Logan Center Exhibitions will host Returns, the first gathering of an extensive multiyear research project, public program, and online platform entitled The Ties That Bind: Waves of Pan-Africanism in Contemporary Art and Society. The Ties That Bind creates space for critical discourse and art production, and engages a multigenerational and international group of artists, scholars, and curators across three public forums taking place in Chicago over the next two years. The first of three gatherings, or congresses, Returns, will feature panels, a roundtable discussion, and film screenings, all free to the public. Additionally, a dedicated website, tiesthatbind.uchicago.edu, will gather texts, images, videos, and viewpoints from the research and public events generated by The Ties That Bind.

“During the year we celebrate the 40th anniversary of FESTAC ’77, the largest of the Pan-African arts and cultural festivals, Logan Center Exhibitions is thrilled to convene a stellar group of artists and thinkers to discuss the impact of the Pan-Africanist movement on the arts and culture of Chicago,” said Yesomi Umolu, Exhibitions Curator. “Returns marks the first in a series of exciting conversations that we look forward to having with the city and the world over the next two years.”

The long and somewhat fraught history of Pan-Africanism—the transnational socio-political movement considering forms of solidarity across the African diaspora and exploring shared cultural touchstones, particularly as a means of uniting against oppressive forces—is embedded in the development of the arts on Chicago’s South Side. Returns considers the aesthetic and sociopolitical ramifications of Pan-Africanist movements of the early to mid-20th century, which sought to garner connectedness and solidarity among Africans on the continent and those of African descent living internationally. With a particular focus on activities in Chicago, Returns also explores trends of Afrocentrism in artistic practices and social movements in the city from the 1960s into the 1970s, alongside reflections on the global Pan-African cultural festivals of the era, including FESTAC ’77.

The convening evolves in two chapters, from Friday, October 13 to Sunday, October 15 and on Thursday, October 19, and addresses the following question: What does it mean to return–to a cultural history, a movement, and to the site of Africa in developing an artistic language?

The first panel will include a lecture from Alkalimat, scholar and co-founder of the Organization of Black American Culture (OBAC), followed by a conversation with attendees. His talk will highlight historical events and cultural producers in Chicago that have connected the city to Africa and Pan-Africanism.

The second panel will explore major Pan-African festivals of arts and culture that took place in the 1960s and 1970s including FESTAC ’77, the largest of these festivals, held in Lagos, Nigeria in January and February of 1977. Moderated by Umolu, the panel will include Madhubuti and Nance discussing their own experiences at FESTAC ‘77 alongside the Chicago delegation with which they attended. Additionally, Malaquais will contribute to the discussion as a scholar interested in Pan-African festivals as nation-building activities on the continent.

The third panel, in which Crawford will moderate a discussion between Webb and Mohaiemen, will consider the everyday politics and geopolitical dimensions of Pan-Africanism. Webb will talk about his personal journey of return to Africa, reflecting on his involvement with radical social groups in Chicago and his subsequent interactions with liberation movements on the continent in the mid-1970s. Turning to the iconic figure of Muhammad Ali, who spent considerable time on Chicago’s South Side and cultivated an internationalism that connected Black America with Africa and the Muslim Third World, filmmaker and writer Naeem Mohaiemen will consider the misgivings and misrecognitions of the famed boxer’s travels to Bangladesh in 1978.

On October 19, post-colonial theorist Françoise Vergès will lead a public roundtable discussion drawing on her writings and extensive research on postcoloniality, racism, and the work of Pan-Africanist scholars, such as Aimé Césaire, to consider the origins of Pan-Africanism and its contemporary articulations in the culture and politics of the African diaspora.

In the spring of 2017, Umolu was awarded a $50,000 grant from the Andy Warhol Foundation for the Visual Arts to begin research on the project. In addition to the central question posed during Returns, her research is guided by two additional topics considering Pan-Africanism: Nonalignment, which takes into account resistance towards the reductive tendencies of Pan-Africanism and the shifting focus towards local interconnectivity and cultural hybridity; and Horizons, which explores contemporary trends and connections across the African diaspora. Umolu plans to have each question addressed at public gatherings in Chicago, and for the project to culminate in a publication and final exhibition that will be presented in the Logan Center Gallery in Fall 2019.

“The Ties That Bind reflects much of what we hope to achieve at the Logan Center, a locus for impactful and collaborative artistic innovation,” said Bill Michel, Executive Director of UChicago Arts and the Reva and David Logan Center for the Arts. “This project, and Yesomi’s work with artists, scholars and other curators, fosters cultural engagement across our communities at the university, on the South Side, and across the City of Chicago.”

Like the earlier transnational gatherings of an international cohort of Pan-African scholars, thinkers, and artists throughout the 20th century, the three congresses of The Ties That Bind will serve as an opportunity to share experiences, present work, and engage in conversation around present forms of solidarity across the diaspora. The Ties That Bind aims to shed light on a movement that, following the Chicago Conference on Africa in 1893 (cited as one of the first Pan-African congresses), has continued to influence the city’s artistic and sociopolitical landscape. 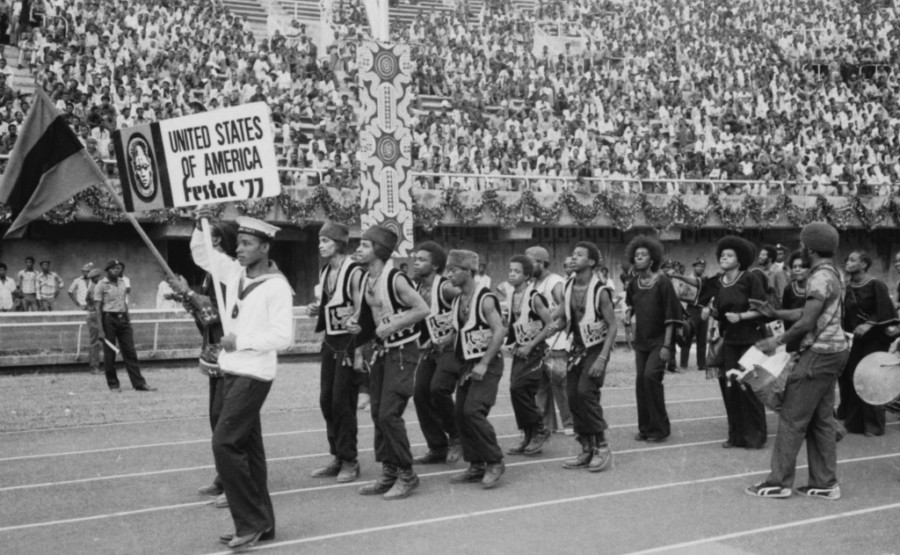