On view through Saturday, November 25th

Chicago, Il: Elephant Room Gallery is excited to present an exhibition with two Chicago-based artists active in the mural community. “BlackBook Sessions: Dredske & Rahmaan Statik” is a body of various collage works and paintings that are inspired by the history and culture behind the practice of keeping blackbooks. The exhibition is reflective of Chicago hip hop history’s inspiration and influence on a generation of young artistic Chicagoans.

Popular amongst graffiti writers/artists, these blackbooks contain detailed drawings, writing, and collaborative works, as the books are often passed back and forth. The blackbook is where one develops their style, serving as documentation of the artist’s evolution, thus becoming a sort of style guide. Just as proprietary companies outline the rules for their branding and identity in their style guides, the blackbook houses the writer’s visual identity and serves as a reference point for the artist and anyone trying to understand the basis or origin of their style. The name, “The Blackbook Sessions” is inspired by a mixtape series put out by the hip hop collectives and labels Galapagos 4 and Nacrobats, which featured art by Josh Grotto (Jash) and music by local artists such as Pugslee Atoms, Cosmo Galactus, Off-white, Prime and more.

Artists Dredske and Rahmaan Statik share a studio in the Bridgeport Art Center currently and have come together to create this body of nostalgic work that will serve as a culmination of their artistic development over the years. Looking to the past, present and future, “BlackBook Sessions” is a celebration of the cultural foundations and practices that have inspired and motivated the artists to elevate their craft over the years and provides a platform for new audiences to be exposed to this creative subculture.

“BlackBook Sessions: Dredske & Rahmaan Statik” opens on Saturday, October 28th with a reception from ​5:30​pm to 9pm. The exhibition will be on view from October 28th through November 25th, 2017 at Elephant Room Gallery, located at 704 S Wabash Ave. in the South Loop neighborhood of Chicago. For viewing hours and more information check the gallery’s website: www.elephantroomgallery.com.

About Dredske
Terence Lashawn also known as “Dredske” was born in Chicago, Illinois, in 1982 and currently lives and works in the city as a painter, muralist, and illustrator. The artist has been involved in exhibitions at Harrington College (2015), The Zhou B Art Center (2012), Murphy Hill Gallery (2011), OhNo Doom Gallery (2010), The River East Art Center/ Gallery (2009), and Around the Coyote (2006). His work is in the private collection of Jumaane N’Namdi of G.R. N’Namdi Gallery, Erwin Overes of Studio Oh!, and Nathan Mason of the Chicago Dept. of Cultural Affairs. The artist is also a member of the Chicago-based art collective RK design.

About Rahmaan Statik
Growing up on the South Side of Chicago, surrounded by urban art and public murals, I became inspired to be involved with the subculture of Street Art. A consequent arrest for “vandalism” put me on a mission to legitimize the production of aerosol murals. This became the main focus of my work: public murals that fuse the graffiti aesthetic with a classical training received from the American Academy of Art. As co-founder of R.K Design, a graphic arts and mural collective, I have produced over 400 murals, received mural commissions for corporate clients such as Coca Cola, Toyota, The village of Rosemont, and Red Bull. I have also produced illustrations, brand identity, print projects for Frank 151 magazine, Argus brewery, and the Chicago Jazz Fair . Through the Chicago Public Art Group, as well as After School Matters, Since 2004 I have instructed children in mural painting techniques, as well as mentored young artists in their craft. I currently work out of my studio in the Bridgeport Art Center in Chicago, where in addition to my Mural and teaching career I also create art for gallery exhibitions using oil, acrylic, graphite, pen & ink, pastels, mosaic tile, found objects, spray paint and digital media. I am currently creating street art in cities across the world, creating art works for museum and gallery exhibitions.

​High res images are available upon request. Attaches images are of a stack of blackbooks in the artists’ studio.​ 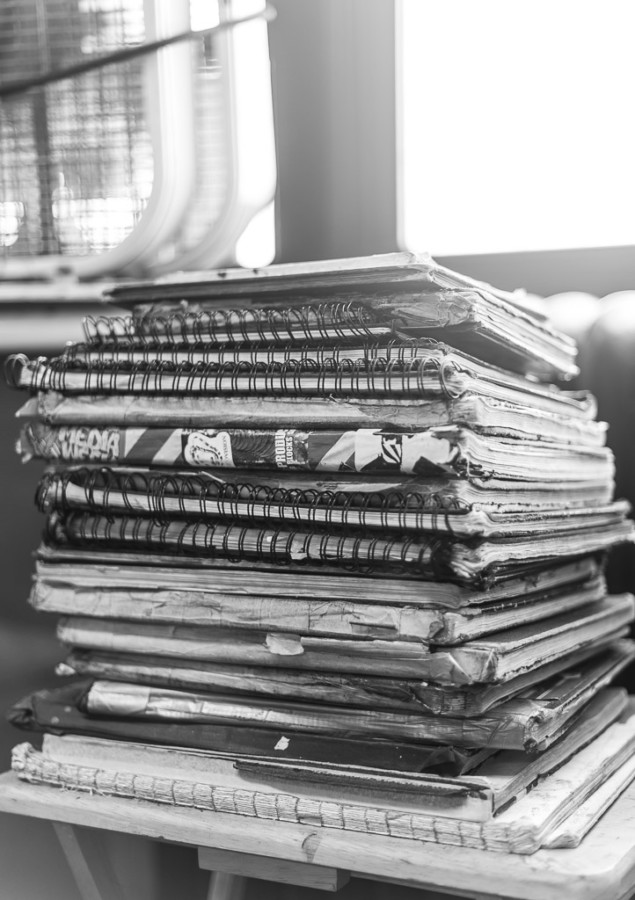