The Department of Exhibitions, Performance and Student Spaces (DEPS) at Columbia College Chicago is pleased to invite you to a discussion between Dolores Huerta, co-founder of the United Farm Workers and Paul R. Chavez, the President of Chavez Institute for Law and Social Justice.

The conversation will focus on the monumental and historic contributions of the United Farm Workers Movement and the expansive effect its efforts have had on current activist movements. This conversation is held in conjunction with the Glass Curtain Gallery’s current exhibition ¡Sí, Se Puede!

This conversation was made possible with support from Dolores Huerta Foundation and Chavez Institute for Law and Social Justice.

¡Sí, Se Puede! is an exhibition that connects the legacy of Cesar Chavez and Dolores Huerta and their work with the UFW (United Farm Workers) Movement to current artistic practices centering on education, history, acts of resistance, and community work in Chicago. For the exhibition, five artists have immersed themselves in the UFW archives to use the documents, images, and publications they found as springboards for creating new works. A selection of’ photographs by Victor Alemán, Cesar Chavez’s personal photographer, is also included to provide illuminating historical context of the UFW movement. ¡Sí, Se Puede! extends beyond this gallery along the Wabash Arts Corridor—with two new murals being painted—and stretches west to partners in Pilsen and Little Village. This program provides a crucible for creating a dialogue about self-determination movements and the relationships among the archive, history, and current contemporary culture.
Participating artists: Victor Alemán, William Estrada, Ian Kerstetter, Nicole Marroquin, Victoria Martinez, and Gloria “Gloe” Talamantes, with murals by Hector Duarte and Sam Kirk.

To learn more go to www.colum.edu/sisepuede

This exhibition is organized and curated by Meg Duguid with related programming facilitated by Rogelio Becerra-Ramirez.

This exhibition is generously funded by a grant from The Joyce Foundation and created with support from Cesar Chavez Foundation, United Farm Workers Foundation, Dolores Huerta Foundation, Chavez Institute for Law and Social Justice, and Walter P. Reuther Library of Labor and Urban Affairs. 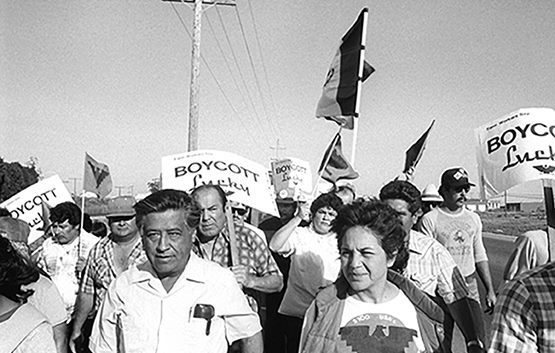