On view through Saturday, October 7th

In Eretz HaKodesh, Eretz HaChalul (Holy Land, Hollow Land) Chicago-based artist Liam Ze’ev O’Connor presents works in drawing and video that explore the landscapes of Israel and Palestine as a land made hollow from years of violence and occupation. For many Jews in the diaspora, Israel is at the core of spiritual life and the contentious center of political discourse. The word diaspora marks internal loss because that homeland, the distant “center” of the community, feels less and less like home, orbiting a center that no longer exists.

In the upper gallery are selections from “5 landscapes that Israel has named weapons after,” a series of panoramic graphite landscape drawings (42”x80”), smaller studies of the weapons themselves (4.5”x4.5”), and documents tracking the governments that use them (8.5” x 11”). The precision of the smaller weapon drawings invites increased scrutiny from the viewer, while the larger landscapes, though tied to specific place, are abstracted through looser mark making.

“Hollow Land,” presented in the lower gallery, is a black and white video created from screenshots sourced from a distorted PDF copy of Eyal Weizman’s book of the same name, which investigates the ways that the state of Israel employs architecture in the occupation of the West Bank and Gaza. The screenshots are photos, diagrams, and maps, which show the present reality and speculative solutions to the occupation. The video loops these images so that they appear fragmented; collapsing the present moment with future plans and layered histories into flashes of an abstract landscape. 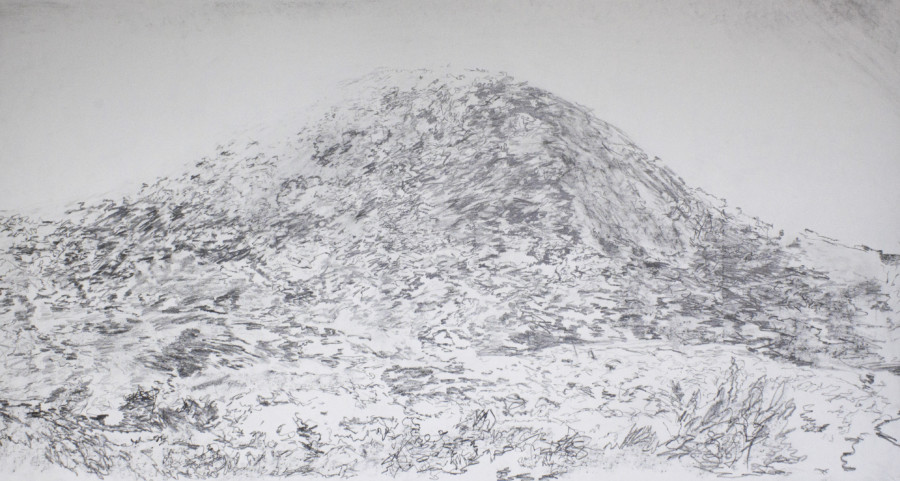