Writing is a process of dealing with not knowing, a forcing of what and how. We have all heard novelists testify to the fact that, beginning a new book, they are utterly baffled as to how to proceed…At best there is a slender intuition, not much greater than an itch.
–Donald Barthelme, Not Knowing

An artist embarks on her task without knowing what to do. There is some kind of energy that she is manifesting as she works, and it has a larger form. To know in advance as to what that form is, is to reduce it.
–George Saunders on Not Knowing

When inspiration strikes, it feels as if it comes from outside oneself. The process of making art involves a kind of subtle foreknowledge, an awareness of the work before it exists, and communication with neurological processes deep within the wordless mind. In the search for answers, an artist finds more questions lingering in that uncomfortable place of not knowing. The result of that discomfort, according to Barthelme, is the possibility that the artist might show the viewer, “the as-yet-unspeakable, the as-yet unspoken.”

Good art is hard. An artist can over-think and become paralyzed, but to Barthelme, “Problems are a comfort” because it is through problem solving, or making choices, that the artist moves from not knowing to finding a unique and defining style. Take for example, the story of one of Chicago’s great culinary achievements– the Italian beef sandwich. Essentially, poor entrepreneurs on Maxwell St. figured out how to turn salt, cheap cuts of meat, and stale bread into an inexpensive, delicious meal. They were constrained by cost and by what ingredients were readily available. Similarly an artist responds to and creates constraints, imposing limitations or rules within the work. Paradoxically, it is within these constraints where freedom and innovation are found.

Being an artist is to live within a series of constraints and limitations. Today, an artist must make her way in the world within structures that are in the process of collapsing, dissolving, or becoming irrelevant. The rigid gender roles of the past, normative definitions of family and caretaking, are all being renegotiated. The particular methodologies parent artists (and female parent artists in particular) have to come up with in order to continue to work while parenting are not yet standardized or obvious. They must be hammered out individually. The artists in this exhibition make a different kind of work– thoughtful and contemplative art made alongside working, teaching, and raising a family. Overlapping limitations and opportunities define their style. They embrace “not knowing” in the way they make their work, but also in the uncertainty and the freedom of living in this state. They are: Claire Ashley, Karen Azarnia, Clarissa Bonet, Robin Dluzen, Dan Devening, Andreas Fischer, Celeste Rapone, Melody Saraniti, Ann Toebbe, and Noah Vaughn.

Claire Ashley was born and raised in Edinburgh, Scotland and now lives and works in Chicago, Illinois. She teaches at the School of the Art Institute of Chicago in the Department of Contemporary Practices, and Department of Painting and Drawing. She has an old husband, three children, two dogs, and a cat.
Her recent work investigates inflatables as painting, sculpture, installation and performance costume. She mines the language of painterly abstraction, monumental sculpture, slapstick humor, and pop art to transform mundane industrial materials into inflatable painted sculptures and performative props.
http://www.claireashley.com/home.html

Karen Azarnia is a Chicago-based artist, educator, and curator. She received an MFA in Painting and Drawing from the School of the Art Institute of Chicago and a BFA from the Rhode Island School of Design. Solo exhibitions include Terrain Exhibitions, Oak Park, IL; the Union League Club of Chicago, IL; The Riverside Arts Center, IL; with group exhibitions at the Chicago Artists Coalition, IL; Elder Gallery, Nebraska Wesleyan University, Lincoln, NE; and the Evanston Art Center, IL. She is a grant recipient from the Illinois Arts Council and the Chicago Department of Cultural Affairs, and her work has been included in Hyperallergic, the Huffington Post and Newcity. She is a Lecturer in the Department of Painting and Drawing at the School of the Art Institute of Chicago.
http://karenazarnia.com/

Clarissa Bonet Lives and works in Chicago. Her current work explores aspects of the urban space in both a physical and psychological context. She received her M.F.A. in photography from Columbia College Chicago in 2012, and her B.S. in Photography from the University of Central Florida.
Bonet’s work has been exhibited nationally, internationally, and resides in the collections of JPMorgan Chase Art Collection, the University of Michigan Museum of Art, The Museum of Contemporary Photography’s MPP collection, the Southeast Museum of Photography, and the Haggerty Museum of Art. Her work has been featured on CNN Photos, The Wall Street Journal, The Eye of Photography, Photo District News, Juxtapoz Magaine, and many other notable online and print publications internationally. Bonet has received recognition and support for her work from the Individual Artists Program Grant from the City of Chicago Department of Cultural Affairs & Special Events and Albert P. Weisman Foundation. Recently, she was chosen as one of PDN’s 30 New and Emerging Photographers to Watch in 2015 and selected as a 2016 Flash Forward Emerging Photographer by the Magenta Foundation.
http://www.clarissabonet.com/

Dan Devening is an artist, curator and educator living in Chicago. He’s currently an Adjunct Professor of painting at the School of the Art Institute of Chicago. Since the mid-1980s, his paintings and works on paper have been featured nationally and internationally. In the United States, his work has been featured at Autumn Space, Roy Boyd Gallery, Chicago Cultural Center, Terra Museum of American Art, ebersmoore gallery, Threewalls and Julius Caesar in Chicago; Kinkead Contemporary in Los Angeles and Launch F18 and Printed Matter, Inc. in NY among many others. Recent projects include exhibitions in Germany at the Kunsterverein Recklinghausen, Museum Kurhaus in Kleve, galerie oqbo and Scotty Enterprises in Berlin, dok25a in Dusseldorf and Renate Schroeder Gallery in Cologne. Other international group exhibitions include shows at Art Metropole in Toronto; De Appel in Amsterdam; Secession in Vienna and Galerie des Multiples in Paris.
http://dandevening.com/

Robin Dluzen earned her BFA from Adrian College and an MFA from The School of the Art Institute of Chicago in 2010. Her work has shown at The Hyde Park Art Center, Burt Green Fine Art, Harper College, and the Chicago Artists Coalition. She has written for Art F City, the New American Paintings blog, New City, and the Reader. She is currently the Exhibitions and Operations Manager at the Ukrainian Institute of Modern Art.
http://robindluzen.tumblr.com/

Andreas Fischer is a Chicago-based painter and Assistant Professor of Painting and Drawing at Illinois State University (Normal, IL). Over the past ten years, his work has been exhibited in solo and group exhibitions in New York and Chicago, including a 12 x 12 solo exhibition at the Museum of Contemporary Art, Chicago. He received a BFA from the School of the Art Institute of Chicago, an MFA and MA in Art History from the University of Illinois at Chicago, and studied at the Universität der Künste Berlin. He was awarded an Artadia artist grant in 2004. His most recent solo show was The Ghost in Your Shoe at Andrew Rafacz Gallery in 2015.
http://andreasfischer.us/images

Celeste Rapone Celeste Rapone was born in 1985 and raised in New Jersey. She received her BFA from the Rhode Island School of Design in 2007 and her MFA in 2013 from the School of the Art Institute of Chicago. Her work has been in group and solo shows at Zolla Lieberman Gallery in Chicago, Expo Chicago, The Hyde Park Art Center, Roots and Culture (forthcoming), and the Union League Club of Chicago. Her work was featured in the 2013 New American Paintings Catalogue. She currently teaches painting and drawing at the School of the Art Institute of Chicago.
http://www.celesterapone.com/index.html

Melody Saraniti grew up in Ohio and has a BFA in painting from Kent State University. She received an MFA in 2009 from the School of the Art Institute of Chicago. She has exhibited her work in Illinois at the Union League Club of Chicago, Thomas Masters Gallery, Riverside Arts Center, Hyde Park Art Center and Comfort Station. She has received six grants from the City of Chicago Department of Cultural Affairs and has been the artist in residence at SIM in Iceland, Jentel in Wyoming, Oxbow in Saugatuck, Michigan and Vermont Studio Center in Johnson, Vermont. Her work has been reviewed in Art LTD. Magazine and on the Bad at Sports website. In 2014 she began a curatorial project called Trigger where she invites one artist to select and write about another artist who has informed or challenged their practice. She curates their work together to create a heightened dialogue about the influential relationships that shape artistic practice. The first iteration of this project took place at Hyde Park Art Center in Chicago.
http://melodysaraniti.com/home.html

Ann Toebbe was born in 1974 in Cincinnati, OH. She earned her MFA from Yale University in 1997 and her BFA from the Cleveland Institute of Art in 1995. In Chicago, she has shown at Threewalls, EBERSMOORE, The Suburban, and The Hyde Park Art Center. In New York she has shown at Monya Rowe Gallery and Joshua Liner. In 2015 her solo show was reviewed by Roberta Smith for the New York Times. She currently lives and works in Chicago, IL.
http://monyarowegallery.com/artist.php?aID=202

Noah Vaughn earned his BFA from the School of the Art Institute of Chicago in 1993. He has exhibited throughout Chicagoland and has been interviewed for Chicago Magazine, Belt Magazine, BLDGBLOG and North by Northwestern. He mostly keeps to himself. 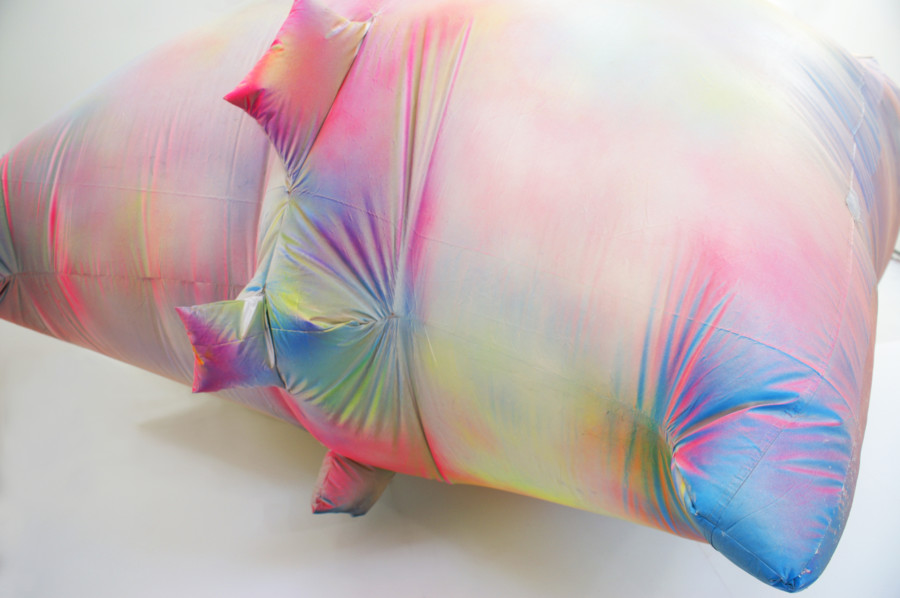