In 2013 the city of Chicago closed 50 public schools, almost all in low-income neighborhoods, citing decreased enrollment and budgetary concerns as the primary reasons. Through a random set of associations, Chicago artist John Preus gained access to the materials – desks, tables, chairs, bookshelves – that were bound for the landfill, and struck a deal with the moving company contracted to clear out the schools. 6 semi loads of wobbly chairs, marked up desks, and gum-laden bookshelves were frantically packed into a donated vacant store front in Washington Park. The materials have since been the primary source for Preus’s work in art, commercial, and domestic venues. Because of the social complexity of the issues raised by the materials, Preus invited 50 artists, designers, and architects to weigh-in with ways to approach this and future material sources embedded with the pathos of history. The response is Infinite Games 50/50, a kaleidoscopic observation on a perplexing and seemingly intractable set of social dilemmas. Infinite Games 50/50, in association with Rhona Hoffman Gallery, EXPO Chicago, and the Chicago Architecture Biennial, includes wall pieces, installations, functional objects, re-designs, prototypes, utensils, furniture suites, and instruments, all made from or inspired by this collection of CPS materials. 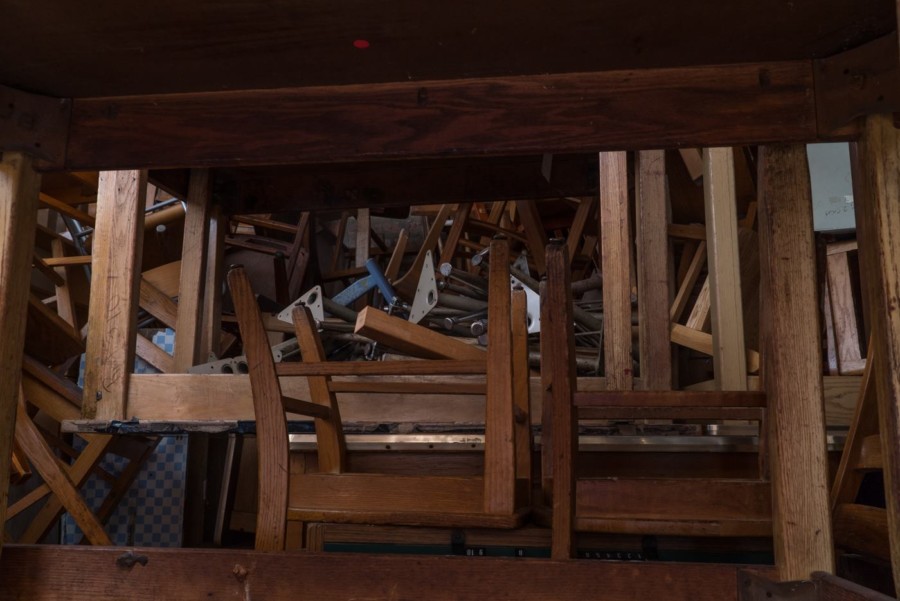