About the book: “Afterglow (a dog memoir)”, Myles’ first foray into memoir, paints a kaleidoscopic portrait of a beloved confidant: the pit bull called Rosie. In 1990, Myles chose Rosie from a litter on the street, and their connection instantly became central to the writer’s life and work. During the course of their sixteen years together, Myles was madly devoted to the dog’s wellbeing, especially in her final days. Starting from the emptiness following Rosie’s death, “Afterglow” launches a heartfelt and fabulist investigation into the true nature of the bond between pet and pet-owner. Through this lens, we witness Myles’s experiences with intimacy and spirituality, celebrity and politics, alcoholism and recovery, fathers and family history, gender, romance, memory, as well as the fantastical myths we invent to get to the heart of grief.

“Afterglow” joins a grand literary tradition of writers paying homage to a beloved dog—J. R. Ackerley’s “My Dog Tulip”, Virginia Woolf’s “Flush”, Mary Oliver’s “Dog Songs”, Amy Hempel’s stories, as well as Mark Doty’s “Dog Years”, and even Abigail Thomas’s “A Three Dog Life”—but as one might suspect, Myles’ entry in the canon subverts both genre and tradition and stands apart as resolutely its own thing. Combining screenplay, monologue, science fiction, and lucid memory, the text is animated with photos, diagrams, drawings, and poems to craft a mosaic of their life together.

Moving from an imaginary talk show where Rosie is interviewed by Myles’s childhood puppet, to a critical reenactment of the night Rosie mated with another pit bull; from lyrical transcriptions of their walks, to Rosie’s enlightened narration from the afterlife, “Afterglow” illuminates the surreal and familiar aspects of what it means to dedicate your existence to a dog.

About the author: Eileen Myles is the author of more than twenty books, including “Chelsea Girls”, “Cool For You”, and most recently, “I Must Be Living Twice: New & Selected Poems 1975-2014”. Their many honors include a Guggenheim Fellowship in nonfiction, four Lambda Literary Awards, the Clark Prize for Excellence in Art Writing, the Shelley Memorial Award from The Poetry Society of America, Creative Capital’s Literature Award, as well as an Andy Warhol Foundation Art Writers’ Grant and a Foundation for Contemporary Arts grant. They live in Marfa, TX and New York City. Their poems were fea 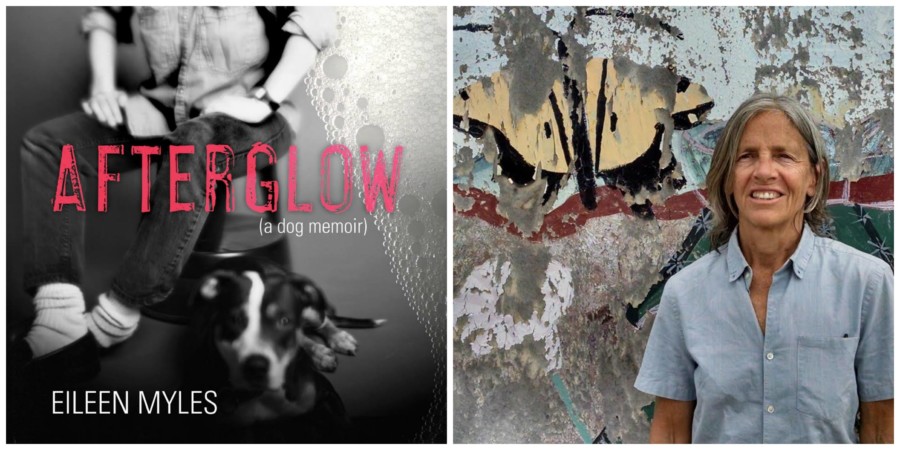