‘Athletic Daughter Cells’ transforms Prairie into an aquarium for a youthful swimming rodent. It’s a sculpture garden, a playground, and a dark creation myth that goes like this:

soundless, under the North American water vole (Microtis richardsoni) that lives in this room. She is 48 days old and has been swimming for 31 days. Her youth is conspicuous.

Water voles have unusually large hind feet that contribute to their speed in the water and distinguish them from other Microti. This water vole is special because a pituitary hiccup gifted her a long left foot that extends 8 mm past her right foot. After swimming in circles for weeks, she’s evolved a method for sustaining motion in one direction by adding an extra right kick to every third round of kicks so that her trajectory resembles the scalloped edge of an awning. As a result, her right thigh has become overmuscled, exaggerating the dwarfed appearance of her right foot and left leg.

The underparts of the water vole in this room are gray-white and her back fur is reddish. She is 23 cm long and weighs 141 g. Currently postured mid-stroke, the third claw on her large left foot is pointing at the “k” in the word “neck” in the last line of the swelling agitation paragraph. From that claw, her body extends diagonally towards this wall so that her right eye is grazing the “c” in the word “American” above. She’s about to perform a series of right kicks that will roll her away from this wall towards the Fun Divorce Slide.

“Let’s split!,” she’ll think at herself. She’ll look at the slide, roll, gather herself. It will be ritual. Facing the image, she’ll imagine her feet within it, divorced from her body, waiting side by side atop the two chutes. She’ll picture them huge up there, isolated, as large as human children: the right foot the scale of a swaddled newborn, the left a reclining toddler. As always, she’ll take a moment to establish a deeply felt link between her real feet treading the water here, and her fantasy feet topping the photographed slide. She’ll close her eyes and tune her awareness to the slow polyrhythm of her real kicks — four (RRRR) on the right

over three (LLL) on the left — then open them to envision her fantasy feet atop the slide rocking in time. When the link feels strong she’ll proceed like: “Here we go you little channel diver… Ha!… Here we go you shhh…”

She will lean forward in real space and rapidly click her teeth while picturing her feet tipping into the slopes in the photograph. The fantasy motion will be choppy, single frames passing with each click, but her feet will be clear in each frame. As her fantasy feet approach the fork in the slide, she’ll feel a swelling agitation in her upper butt that will be hard to describe. It’ll feel like mild electrocution or the feeling under the skin of someone repeatedly tapping her there without the surface feeling. The agitation will climb her back like the pull of a zipper as her fantasy feet slide down and away from each other, and it will climb into her neck as the feet round out their parting into each of the final straightaways.

The climax of her mitosis will be a bust load of correct civilians shouting the truth in unison. It will be the mechanism by which all things cancerous and living express greatness. In this split moment, the vole will relax her jaw, wrap her tail in a “p” and watch her concocted feet spurt out of the photograph like bullets shot through a pond: fast at first past the “p,” and fast under That Cross Brace By The Game Under The Stretched Laced Sky, then slowed, suddenly, tumbled by drag, claws over heels like punted footballs, claws over heels wobbling past your calves, your ankles, four flips over three, looping to settle,

David Sprecher graduated with an MFA from the Art Theory and Practice program at Northwestern University in 2016. As a sculptor and writer, he makes augmented realities that conflate architectural and literary interiors. In 2016 he published a novella Plumb, and has shown work in New York, Chicago, Baltimore and Berlin. 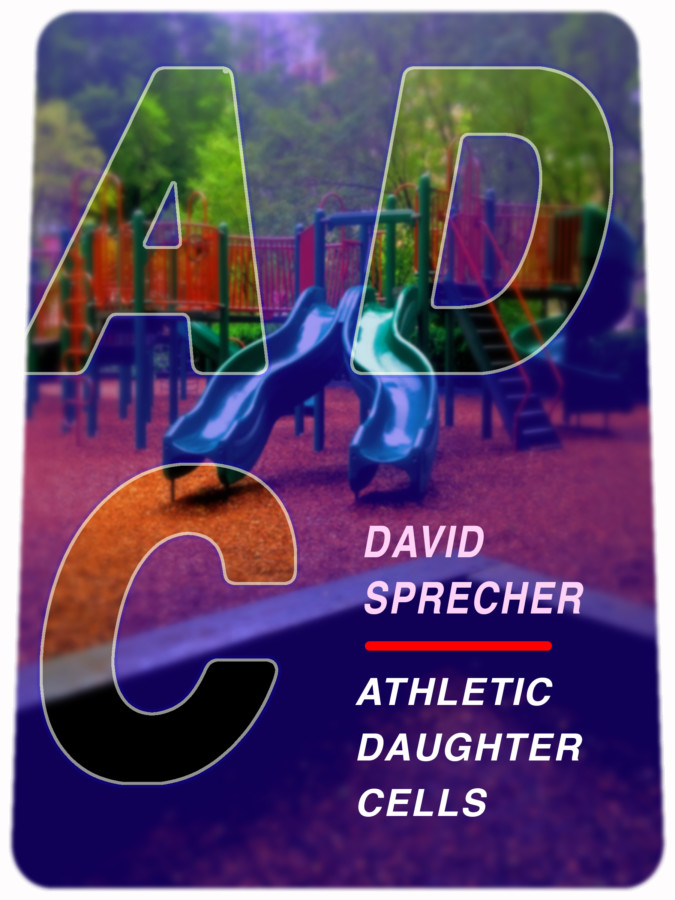