Chris Johanson: Worms, Birds, People, and Air: The Art of Oh No and Dissociative Thinking

Worms, Birds, People, and Air: The Art of Oh No and Dissociative Thinking by Chris Johanson

“I can tell you

Getting casual with some organic food and smoking a joint and taking a handful of pills as the cloud cruises over, although harsh sounds like a much better way to die than living in a bunker with the special people

Navigating depression and anxiety is a game that involves sunlight, activity, and eating the right foods

Prints are fun to make, these ones are unique but it doesn’t mean we can’t pretend they are in an edition, and the edition size is infinity/infinity

An installation that involves a room of paper mache and wood and prints and a few drawings, the idea of the ground and above and below, prints throughout the room and installation, images block printed of food, disinfectant, insects, water, pills, Pinot Noir, and some of the other things in our lives

Birds flying around make me feel pretty good, as good as palates

It’s fucking scary out here in the USA, the fistfights feel a few seconds away with miscommunication at a four way stop sign

Art is for Peace”

Chris Johanson (b. 1968) is based in Los Angeles. He has exhibited widely in museums and galleries internationally over the past two decades. His work has been the subject of solo shows at Art Gallery in Saratoga Springs, New York (2014); the Portland Museum of Art in Portland, Oregon (2014); LA MoCA Pacific Design Center in Los Angeles, California (2013); and the Modern Institute in Glasgow, United Kingdom (2013). Johanson has been featured in important group exhibitions including Glasgow International 2012 and the 2002 Whitney Biennial. 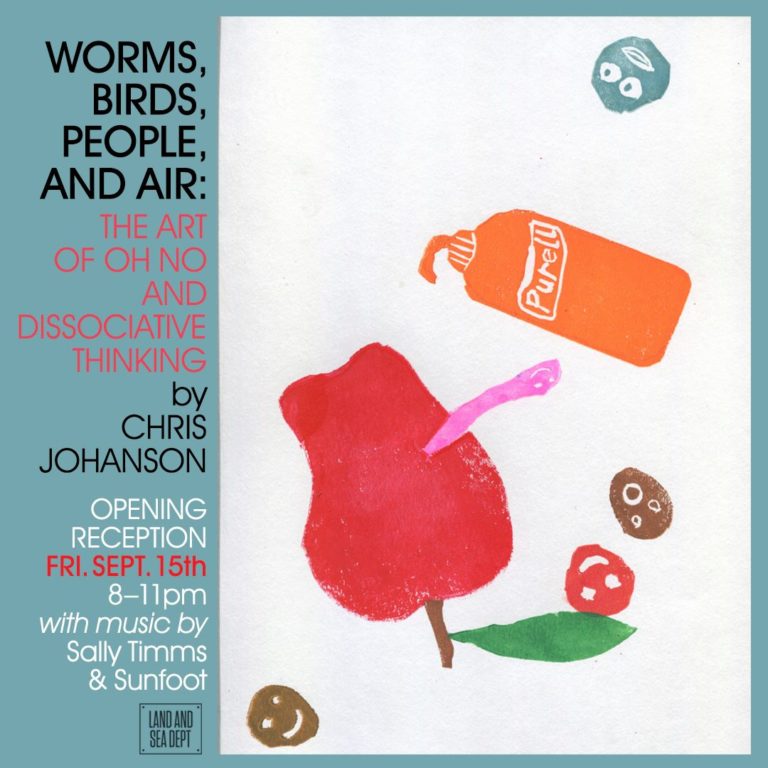