The Floating Museum at the Chicago Riverwalk

On view through Sunday, August 27th

The #ChicagoRiverwalk is welcoming a temporary riverside exhibition by The Floating Museum, the collaborative arts organization that creates temporary, site-responsive installations to activate sites throughout Chicago. The interactive spaces engage artists, historians and organizations in events that think outside the museum and generate community conversation. The summer exhibition “River Assembly” will travel along the river to the Chicago Riverwalk (at the River Theater between LaSalle and Clark Streets) where it will dock for two weeks from August 14 to August 28, when it will move on to Navy Pier. The installation is open daily, and admission is free.

“The Floating Museum is taking collaborative arts to the next level by bringing temporary, site-responsive museum spaces to sites throughout Chicago’s neighborhoods,” said Mayor Emanuel. “Using the city’s waterways, the museum activates sites along the river to bring art and cultural programming directly to visitors and Chicago residents.”

Beginning August 15th, a free daily tour will lead visitors through the Chicago Riverwalk’s display, discussing the artists, partners and museum. Finally the culminating event “art.i.fact” will take place on the Chicago Riverwalk on August 27, 7–8 p.m. Playing on the idea of art as truth-telling, the event brings together some of the city’s most talented musicians and singers for a combination of live music led by Avery R. Young, dance performances and video art. A full schedule of programs is available at www.thefloatingmuseum.com/calendar.

The Floating Museum has transformed an industrial barge into the aesthetically striking “River Assembly” exhibit – a mobile gallery and platform for public art and cultural programming. At each docking site, art crates will be unloaded to the riverside. The exhibition features a monument to Jean Baptiste Pointe du Sable, a moving image program, interdisciplinary performances and a “wonder cabinet” made from crates by Terry Dowd Inc. Some of these crates contain artwork, while others are transformed into works of art to be displayed along the riverside. The “River Assembly” exhibit plays on concepts of buoyancy and migration to physically move art across neighborhoods and transforms city sites into a full museum campus with exhibitions and programming.

The Floating Museum joins other temporary installations of public art on the Chicago Riverwalk this summer. Between Franklin and Lake Streets, visitors can currently see the monumental Deer by Tony Tasset, Vejigante, Mask On by Sam Kirk and Ballerinas by Tyrue “Slang” Jones. Scott Reeder’s Real Fake is on view at the northeast corner of Upper Wacker Drive and Wabash Avenue. A series of banners designed by Candida Alvarez will be installed in mid-August east of Michigan Avenue.

The Chicago Riverwalk is a 1.25-mile promenade through the heart of the city that continues to offer new and improved ways to enjoy Chicago’s waterfronts and architecture. Programming is produced by the Chicago Department of Cultural Affairs and Special Events in collaboration with the Chicago Department of Fleet and Facility Management, Choose Chicago, the Chicago Park District and the vendors and boat tour operators along the Chicago Riverwalk. For more information and a complete schedule of events, visit www.chicagoriverwalk.us and join the conversation on social media using #ChicagoRiverwalk. 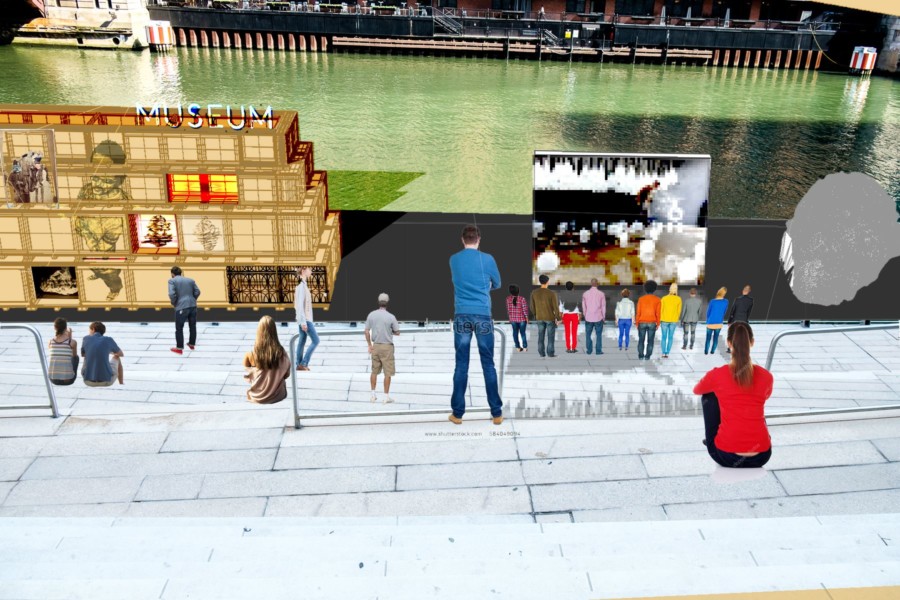