Join the some of the artists included in “Virtue of the Vicious” exhibition as they discuss the work on view. Kevin Blake, Jasmine Clark, Eric J. Garcia, Michelle Hartney, Jay Turner Frey Seawell, Emilio Rojas, and Adela Goldbard talk about their work through the the lens of patriotism in America.

About Virtue of the Viscious:

Assessing the nation’s moral compass through visual clues in the landscape, cityscape, media imagery and historical anecdotes, artists evoke a range of emotions. The hopeful “Make American Love Again” campaign by artist Michelle Hartney quietly encourages compassion as a patriotic exercise, while an installation by the El Coyote Cojo collaborative illustrates the uncomfortable historical thread of the popular past time baseball, creating a metaphor for Mexican-American experience of loss and negation of identity.

In his photographs, Jay Turner Frey Seawell frames Washington DC’s national monuments, architecture and government buildings, some in disrepair, as symbols for the relationship between citizens and the government. Eric J. Garcia’s graphic animation and sculpture criticize America’s culture of violence using the satirical tradition of political cartoons. For the exhibition, Garcia works with Luis Mayorga to create a new large scale animation, illustrating filter bubbles and distortive reporting in the news media. The title of the exhibition, taken from a quote attributed to Oscar Wilde, alludes to the complicated emotions associated with loving and supporting one’s country while not being proud of its’ actions. 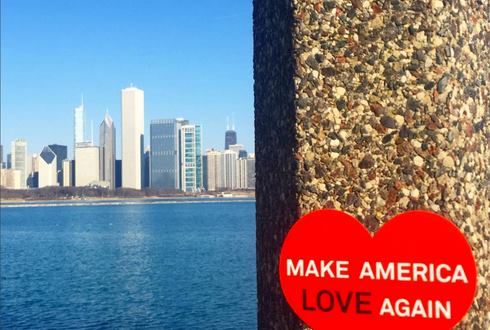