On view through Friday, August 11th

Rodrigo de la Sierra lives and works in Mexico City where he was born in 1971. After successfully creating a career in architecture for 12 years, De la Sierra goes on to study and develop a career as an artist, a sculptor to be precise.

From a series of doodling figures drawn on a phone pad is born the tragic- comedy figure of Timoteo, fondly nicknamed Timo- an alter ego figure with a submissive, gentle, child-like continence which makes the very conceptual pill he administrates much easier to swallow.

Chicago Tribune: “The dichotomy created by using a childlike figure to represent a man conceptualizing the world he lives in is as surreal as it is immersive, and culturally pressing. De la Sierra lives and works in Mexico City, so if his creations allow for a gentler critique on today’s society than other artists’ work, it’s probably rooted in his ability to bridge the gap between childhood and adult experiences through art.” – Jessi Roti

WBEZ 91.5: “The Timoteo and His World exhibition is renowned for attracting people of all ages to engage in dialogue. One of the exhibition’s curators, Sergio Gomez, says many families come to the show because it fosters thoughtful conversations between children and their parents about topics such as materialism, depression and ego.” 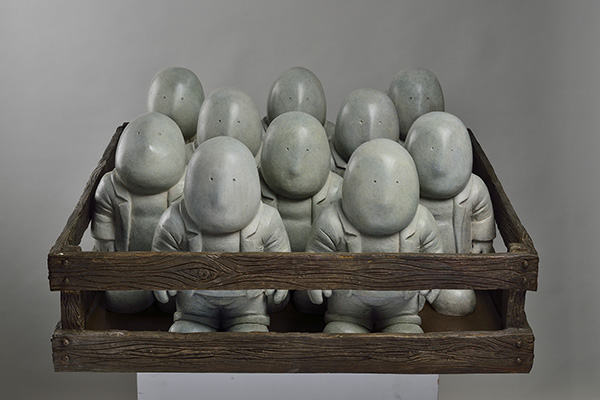