Luis Sahagun: The Mountains Whispered and the Canyon Sang

On view through Thursday, August 10th

The Chicago Artists Coalition is pleased to present a solo exhibition by BOLT Resident Luis Sahagun .

The Mountains Whispered and the Canyon Sang, a solo exhibition of work by Luis Sahagun, will be on view at Chicago Artist Coalition, 217 N Carpenter St, Chicago, IL 60607, from July 21 – August 10, 2017

Luis Sahagun’s solo exhibition is composed of new works such as masks, large scale sculptures, and paintings. In addition, the artist collaborated with Chicago based sound artists’ Matthew Motep Woodsand, Sylvie Grace, and Simantikos (a Chicago based dance company that exists to address social injustices through movement). The collaboration consists of using Sahagun’s mother’s breath and heartbeat to create sounds, melodies, and movements with the intent of channeling messages to his ancestors and friends that were murdered in the Chicago Southland due to gun violence and other social injustices.

During the opening reception there will be two performances titled, I know you are waiting and next time will be better . Each performance varies slightly but both will be in the dance genre of contemporary structured improv. Sahagun says, “for a long time my family has believed that I inherited a special gift that allows me to communicate with the dead. Most of my life I rejected and ignored those beliefs. This is my first project in which I tackle full force the concept of spirituality with my art making.”

Luis Sahagun was born in Guadalajara, Jalisco, Mexico in 1982. Sahagun, a 2001 graduate of Chicago Height’s Bloom High School, earned his BFA from Southern Illinois University in 2006 and his MFA in painting from Northern Illinois University in 2015. He has participated in multiple solo, juried, invitational, and national exhibits in the US and Mexico. In addition to being featured in New American Paintings (Issue #111), Luis’ work has also been showcased at the International Exposition of Contemporary Art (expo) Chicago, The Anderson Museum of Contemporary Art (Roswell, NM), the Chicago Cultural Center, and the National Museum of Mexican Art in Chicago. He is currently a Bolt resident at Chicago Artist Coalition, an Artist Guide at the Museum of Contemporary Arts in Chicago, an Art Educator for The Art Institute of Chicago and Lead Artist for the Smart Museum of Art teen summer program.
Photo: Luis Sahagun wearing one of his masks. 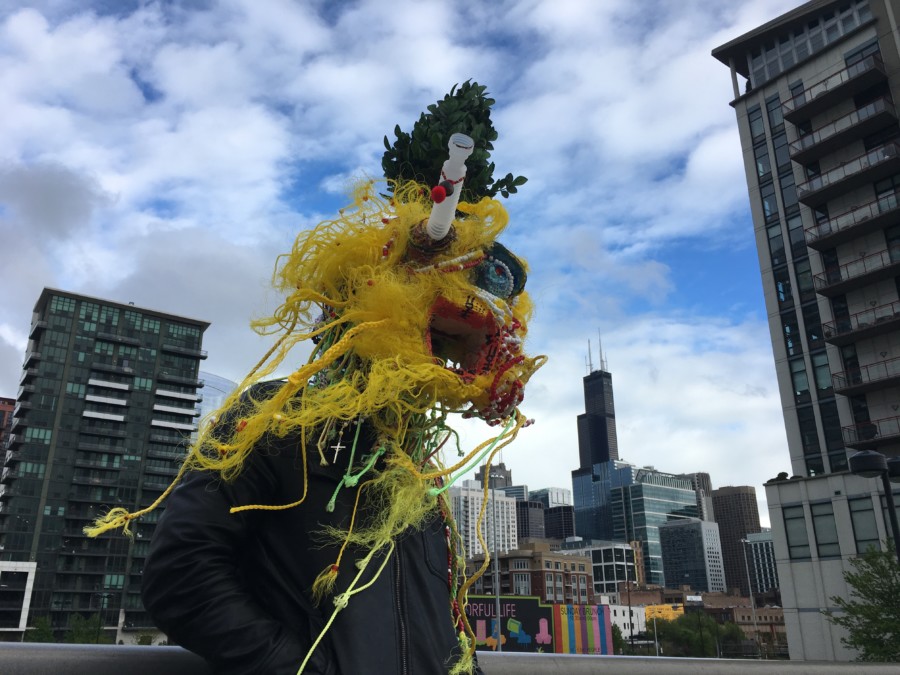