On view through Saturday, August 26th

When someone is driven back into history, as far back as possible, it triggers me to sleuth what they are trying to change. Creation, after all, is fundamentally an act of change. Maybe this impulse is just mine. I’m going back to my beginning to find the deepest parts of me I can, at long last, repair. Ivan Forde (https://iforde.carbonmade.com) culls from the Epic of Gilgamesh, the oldest literary masterwork (decided by someone who has the authority to decide such things). Ivan has a history of making images that recast him in every role. More recently, he is casting personal art heroes in those epic hero roles taking indirect routes to characterization. One of the distinctive qualities about the Gilgamesh tale is the the protagonist is more loved when he loses. Outwardly Gilgamesh has everything and more. He’s a demigod, impossibly beautiful, a wildly empowered athlete and warrior. But his Michael Jordan dominance over all the games is a limitation to reverence for him. Ivan is playing the supportive role; embracing the position of acolyte. He is puffing the chests of his art heroes and we are left to stand witness to a kind of slow decline.

Julie Potratz’ (http://cargocollective.com/juliepotratz) subjects could be described in a way that would suggest they were so devastatingly clear as to being preachy, shrill, and self righteous. She gives space to simple constructs but has a way of laying them open so we land in remarkably different places than we expected we were headed. A lump of dough that we watch live and breathe quickly identifies as flesh yet avoids a simple feminist read in opposition to objectification. It is a meditation on the transmogrification of bread to flesh. It openly sexualizes flesh without the baggage and power dynamic of postmodern sin. Julie looks at awkward mounds inflamed by an imagined horrific razor burn, desperately tarted up in the cheapest fishnet stockings, yet somehow projects her own simple vulnerability onto the resultant wads. Julie’s superpower is recognition. She finds the texture and color of fresh ground beef in a shaggy bath mat. Once again the earth shifts under our feet and we’re no longer contemplating the god-become-flesh theology, nor the building of a sex identity but simply associating desire between presented lunch menu items. Chicken or beef. In the end I am shored up by a shared acknowledgement that perhaps most of us feel like foreigners inside the fleshy vehicles we call bodies. Though it may be embarrassingly self absorbed to see ourselves in every mundane corner of our existence, Julie allows us to giggle at our bumpy bumbling presence in the world. 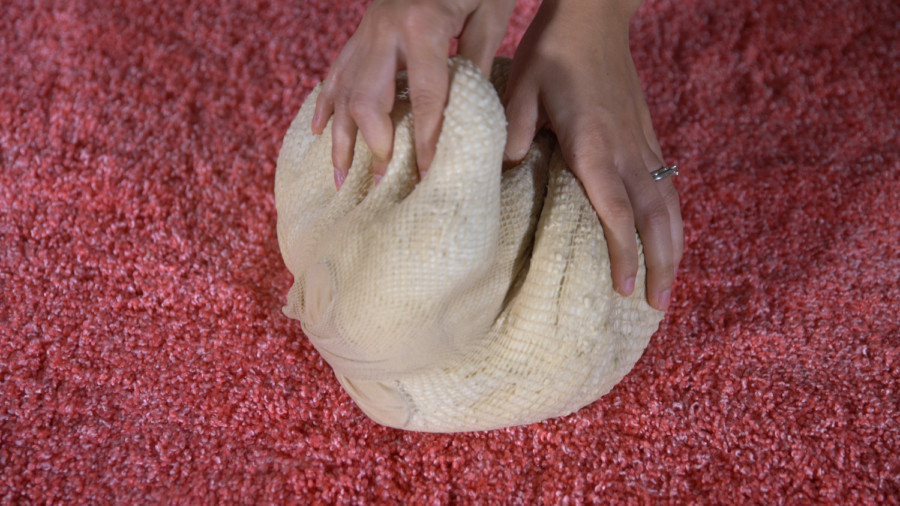