On view through Saturday, August 12th

Stuart & Co. Gallery is pleased to announce These Rebuilt Remains, an exhibition of new works by Gary Csuk. Csuk’s photographs invite the viewer to uncover hidden layers of allure found within a world of ruin and abandonment by encouraging the creation of personal interpretive narratives spurred by instinctive responses to dilapidated surfaces and candid environments. As Csuk states, “Figuratively, the images represent a life being torn down, piece by piece, and being re-assembled slowly over time. Literally, the abandoned, broken, and discarded places and things have been thrown away but have slowly evolved into another state, taking on a different kind of beauty in their decay.”

Featuring photographic diptychs assembled from images collected over the past three years, Csuk pairs details of crumbling interiors and cityscapes with portraits of strangers, outsiders, and himself. The interplay between photographs in both their complementary and disjointed elements fosters dynamic open-ended anecdotes while simultaneously referencing the reconstruction of fragmented and neglected psyches.

This concept is clearly reflected in the juxtaposition of Yay Graduation Day and Time Is Running. Yay Graduation Day depicts a young, recent graduate in a cap and gown, her facial expression showing more exhaustion and apprehension than excitement, as she prepares to shift from one milestone to the next. Time Is Running plays off of this transitory angst through its depiction of a tattered clock and the absence of a frame denoted by discoloration outlining a vacant spot on a wall that once held it. Similarly, Moving On presents a self-portrait of Csuk in his ex-wife’s wedding dress next to a lawnmower and house sold sign while its counterpart, Untouched, spotlights worn clothing found hanging in the closet of a disheveled, abandoned home as if Csuk had plucked the dress from the grime or intends for it to be the outfit’s final resting place.

In addition to conceptual relationships, Csuk also utilizes formal synergies to create dialogue between works. A Study in Green, a self-portrait of Csuk standing in a corn field, and Taking It Back Piece by Piece, a photograph of a bedroom overrun by vines and foliage, speak to the interaction between man and nature, but more prominently employ repetition and color to strengthen the connection. Likewise, the shape and slouch of damaged stacked oil drums in One Man’s Trash echo the posture and architecture in the candid portrait Nate, seamlessly integrating photographs diverse in concept.

Csuk was introduced to photography by attending and documenting rock concerts with his brother. When it became time to choose a career, Csuk decided to pursue a dual degree in Photography and Journalism at Bradley University where he graduated in 1984 with a Bachelor of Science. Having worked for over thirty years as a studio and still-life photographer, Csuk carries his expertise to the streets, warehouses, abandoned buildings, and even his subjects’ homes to enact his singular vision. Csuk lives and works in Chicago, where he maintains his commercial and fine art photography balance by constantly interacting with new subjects and continually roaming for new images. 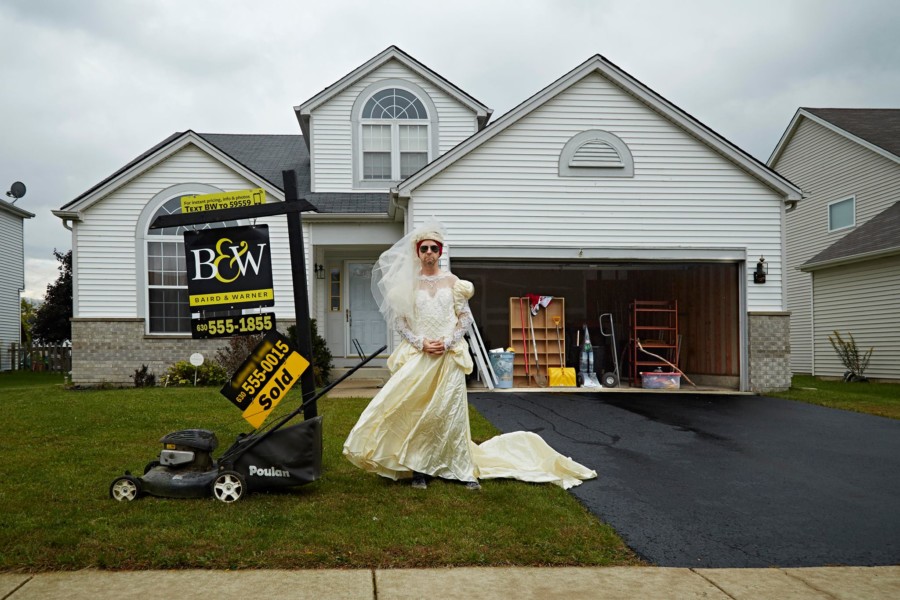