Linda Warren Projects kicks off the summer season with three luminous and illuminating exhibitions by three noteworthy and powerful Chicago-based painters. These artists’ visual languages explore the nature of objects and aesthetics as they relate to popular culture, art history, and our own conciseness. Drawing from humor, cartoons, and irony, each artist borrows imagery that is unique, yet universal, and aims at recollecting memories and identity.

In “Heavy Sunshine,” Chris Uphues presents a series of new paintings and objects inspired by a complex range of popular cultural references such as: Walt Disney, Japanese cartoonist Osamu Tezuka, utilitarian / decorative folk art, as well as the directness of outsider art. Uphues is a painter, street artist, and designer whose visual language incorporates all of the above, yet embodies a style that is uniquely his own. Each of his paintings echoes the chaotic energy of every cartoon, advertising product, and old school video games we’ve all experienced. His densely detailed compositions explode at the seams as form, characters, and objects fall onto one another. A congested world lives within the paintings in which every centimeter of real estate is taken.

As part of the exhibition, Uphues will showcase “Heavy Sunshine,” a substantially impenetrable painting that took him seven years to complete. The mind-bending preciseness of his paintbrush defies logic. With a surface that is flat and a style utilizing characteristics of folk art, in which traditional rules of proportion and perspective are not employed, Uphues’ paintings and objects link to folk art is their ability to express cultural identity by convening shared community values. In his case, it is the values of a whole generation of products, advertisements, and comics. Uphues’ passion for pop imagery is apparent and feeds his overall practice. His style is approachable and translates across generations. His “incidental graphics” – the smiley faces, hearts, hippie flowers patterns of puffy mushrooms, doe-eyed hearts and melting smiley faces – democratizes the pop references, past and present.

Chris Uphues work has been featured in such venues as Secret Project Robot Gallery in Brooklyn, NY; Museum of Contemporary Art, Chicago; the Whitney Museum, New York; the Hyde Park Art Center, Chicago; the Illinois State Museum; and the Chicago Cultural Center, amongst many others. Uphues is also the recipient of the Artists Fellowship Award from Illinois Arts Council and the Print Magazine Design Award. The artist received his BFA from The School of the Art Institute of Chicago.

Gallery X – Chris Cosnowski, I Love Humanity This Much

Known for his hyper-realistic paintings of mass-produced toys and trophies, Cosnowski once again awes us with his immaculate painting style and ironclad irony.
His paintings aim to recall the aggrandizing effects of classical art and instill the banal subject matter with a heroic sense.

Cosnowski writes: “Through these aspects, my paintings riff on the role ‘ideal’ form has played throughout the history of art. In addition to this notion of the ideal, the subjects are mass-produced tchotchkes which relate the work to Pop Art. Also, the monochromatic backgrounds allow the work to reference minimalist and color-field painting. Ultimately, I’m a closet minimalist who creates Neo-Classicist Pop-Art.”

“… His subject matter is small: little toys, plastic knickknacks and tiny figurines. ‘I just thought it would be funny,’ he explains. ‘I remember I stayed up all night painting my first one. The next morning, I sat back and thought, ‘What’s so funny about this?’ I realized these images are great because they really capture our society. There is a subtle sense of celebrity and victory in each of them.’”- Newcity, Maria Girgenti

Through his savagely witty titles, Cosnowski creates a platform for discourse. Like his self-reflecting trophies, he invites us to acknowledge and accept our cultural behavior. By elevating the status of the toss-away, Cosnowski creates icons of the rather mundane. Regardless of their titles or irony, each of these lonesome subjects still evokes nostalgia and reminds us to celebrate our achievements and flaws.

Chris Cosnowski has exhibited widely throughout the country. Recent exhibitions include “SUPER-ficial,” a retrospective of the artist’s work mounted at the South Shore Arts Center in Munster, IN; and “American Metal,” a solo exhibition at Lyonswier Gallery in New York. He has also exhibited in such venues as Dolby-Chadwick Gallery in San Francisco, the Evanston Art Center, Hyde Park Art Center, and the Chicago Cultural Center, amongst many others. Cosnowski was also featured twice on the cover of New American Paintings. The artist received his MFA in Painting and Drawing from Northwestern University, and is currently a faculty member at the American Academy of Art in Chicago.

Gallery O will feature “Transformation,” new paintings by David Reninger. This beautiful and poetic exhibition explores two bodies of work: the metamorphosis of the butterfly paintings, and an elegy for a friend. From beginning to end, Reninger visually embarks on a journey that completes the cycle of life for a butterfly. The physical and chemical are translated through paint, lines, and colors – dots for the eggs, lines for the path of life, colorful strokes for the flower, and abstract swirls of chemical change. These paintings are about instilling a sense of wonder in the viewer parallel to that of nature. In an elegy for a friend, the artist confronts death and loss through a series of fish and bowl paintings. Reninger uses the idea of a container, the bowl as the body and the fish as the spirit, to represent life and loss. Some paintings are full with both spirit and body, or fish and bowl; other paintings show only the body or container, symbolically the shell of life. All of these transformations constantly refer to the power of paint. Reninger states: “Paint becomes illusion and then upon close examination once again becomes paint. Image or abstraction, my aim is to perplex the viewer. A stripe or a path of light? Paint can be both of these simultaneously or morph into one or the other moment to moment. My work plays with this quizzical moment between abstraction and representation. My undogmatic approach brings some to dismiss this hybrid. I believe our global world demands an art of multiple meanings.”

David Reninger’s ever-evolving practice has been featured in venues throughout Chicago and the Midwest including the Ukrainian Museum of Modern Art, the Illinois Institute of Art, the Fort Wayne Museum and the Hyde Park Art Center amongst many others. Reninger has held teaching positions at Northern Illinois University and the University of Illinois, and has been a full-time elementary school art teacher at District 99 in Cicero since 2001. Reninger received his MFA from the University of Illinois in 1991. 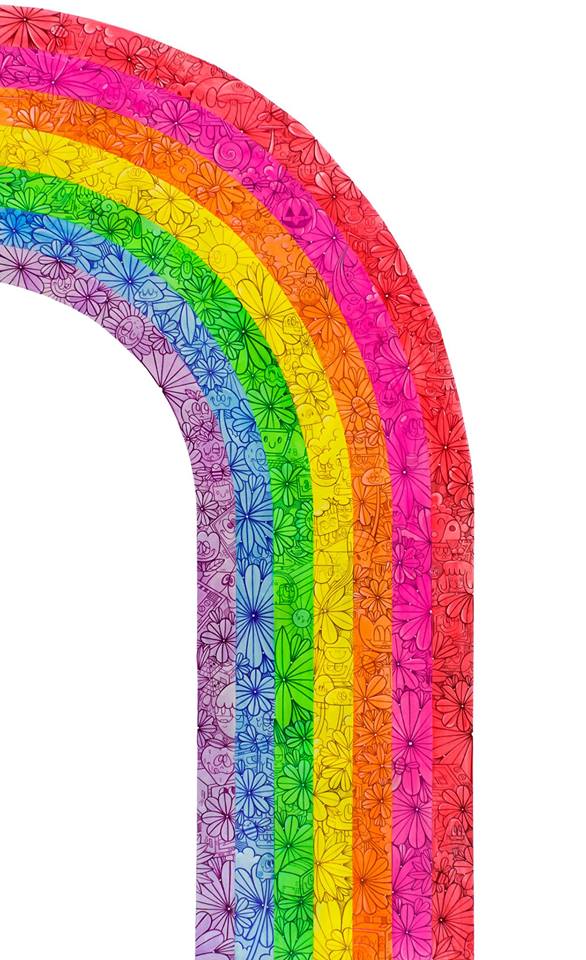