small public beach at the end of Sherwin Avenue

Dean Rosenthal’s Stones/Water/Time/Breath is a kind of experimental music-theater piece in which a participant or participants choose any body of water and perform a set of actions designed to create a musical performance. It was born from an impromptu performance by the composer in May 2012 on Martha’s Vineyard that was later written down as a set of performance steps that can be performed by everyone.

Since then, Stones/Water/Time/Breath has been performed by many in many locales, taught in universities, been the subject of a multimedia installation in Wroclaw, Poland, and published with video performances and commentary in online publications in France and Canada. Stones/Water/Time/Breath was a subject of two article publications that have received wide international recognition and has also been discussed in international keynotes. The text has been translated into two languages, French and Polish, and the composer has given several public talks about the piece.

We’ll be on the small public beach at the end of Sherwin Avenue. The #151, 147 buses stop a block away on Sheridan or the Redline Jarvis stop is just 7 minutes walk. There is a public parking lot at the corner of Sherwin and Sheridan.

Eric Leonardson, Rogers Park resident, sound artist and acoustic ecologist will coordinate this iteration of the piece on June 21. Deirdre Harrison will serve you coffee and tea! 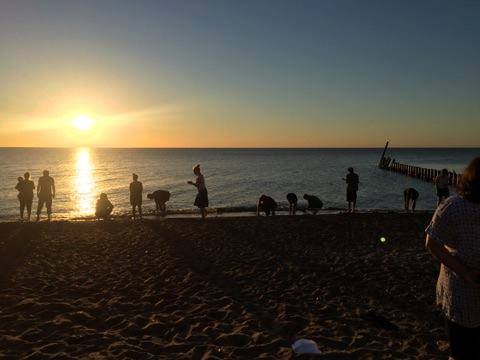