Sashay With and Without History

On view through Saturday, July 15th

Bring out the stage. Dancers. Take your positions. Count. Remember. Breathe. We move in-time, fall in and out of sync. Bodies find each other in the landscape and adjust to their political and emotional ecologies. Steps are notated. Our earth is drawn. We find partners. Form groups. We are the muses of time itself. Music. Night. Restoration. Growth. Arrange the sequences. Dance to organize. Organize a political movement. To sashay with history and without is to “dance like you just don’t care” because we do.

Sashay With and Without History features artists whose works traverse the relationship between choreographic practices and the visual arts. Sashay with artworks that are not bound by history and works that dance with it. In Nabiha Khan-Giordano’s poignant performance, Drag, the artist carries her partner through the gallery invoking both a funerary procession and the practice of extraordinary rendition. Matt Morris presents painting homages to Florine Stettheimer created by college art students to complicate notions of authorship through enacting a painterly dialogue with an art historical figure. The landscape and the many assemblies within it find their way into the exhibition through Pierre Huyghe’s, Untilled, a seemingly unwieldy, overgrown vacant lot at Documenta 13 containing a mysterious pink legged dog named “Human” and a figurative sculpture of a reclining female with a beehive growing around her head. For all its naturalness, we learn from Huyghe’s drawing in the exhibition that Untilled is, in fact, a meticulously choreographed environment. Witness Tree, a collaborative work by Sara Black and Amber Ginsburg, takes inspiration from the colonial land survey practice used to grid the landscape into private plots. By charcoalizing an entire tree into pure carbon and specifically locating it, the artists claim land, in what Robert Smithson referred to as “deep time” where materiality extends notions of time back beyond human history. In Silke Otto-Knapp’s paintings and drawings, figures rehearse dance sequences and exercises to create patterns within the landscape. The moon, a prominent figure throughout Otto-Knapp’s practice, points to a cosmic rhythm which orders our bodily alignment through forces we can scarcely detect, save through the very particular hues found by moonlight.

About the Artists
Sara Black’s work uses conscious processes of carpentry and repair as a time-based method. Through diseased wood, inherited building materials or other exhausted objects as material, she creates works that expose the complex ways in which things and people are suspended in worlds together, often generating forms that push beyond human frames of reference. She works both individually and collaboratively. Black is currently Assistant Professor of Sculpture at SAIC. Her work has been exhibited in a variety of spaces including Museum of Contemporary Art Chicago, Smart Museum of Art, Gallery 400, and Threewalls in Chicago Museum of Contemporary Craft in Portland, Park Avenue Armory and Eyebeam in New York City, Tufts University Art Gallery in Boston, and The Soap Factory in Minneapolis.

Amber Ginsburg creates site-generated projects and social sculpture that insert historical scenarios into present day situations. Her background in craft orients her projects towards the continuities and ruptures in material, social, and utopic histories. She teaches in the Department of Visual Arts at the University of Chicago. Her research-based multimedia installations have been shown in museums and galleries including: Museum of Contemporary Art Chicago, The Soap Factory in Minneapolis, The Society for Contemporary Craft in Pittsburgh, World Ceramic Biennale in Korea; KunstTREFFpunkt in Darmstadt, Germany, Artsonje in Seoul, Korea, Raid Projectsin Los Angeles and the Bristol Biennial in England.

Pierre Huyghe was born in 1962 in Paris and lives and works in Chile and New York. He studied at the Ecole Nationale Supérieure des Arts Décoratifs in Paris. In 2013, his retrospective opened at the Centre Georges Pompidou, Paris, then traveled to Museum Ludwig, Cologne (2014) and the Los Angeles County Museum of Art (2014-15). He has had numerous international solo exhibitions at such venues as the Metropolitan Museum of Art in New York, Museo Nacional Centro de Arte Reina Sofia in Madrid, Tate Modern in London, Dia Center for the Arts in New York, French Pavilion at Venice Biennale, The Renaissance Society in Chicago, Kunstverein München in Munich and Secession in Vienna. Huyghe has participated in a number of group exhibitions such as the 32nd Bienal de Sao Paulo, the 14th Istanbul Biennial, Documenta 13 and 11 in Kassel, 6th Sydney Biennale, theanyspacewhatever at Solomon R. Guggenheim Museum in New York, Whitney Biennial and Traffic at CAPC musée d’art contemporain de Bordeaux, curated by Nicolas Bourriaud.

Matt Morris is an artist, writer, and sometimes curator based in Chicago. He has presented artwork nationally and internationally. He is a contributor to Artforum.com, Art Papers, ARTnews, Flash Art, Newcity, and Sculpture. His writing also appears in numerous exhibition catalogues and artist monographs. He is a transplant from southern Louisiana who holds a BFA from the Art Academy of Cincinnati, an MFA in Art Theory + Practice from Northwestern University, as well as a Certificate in Gender + Sexuality Studies. Morris is a lecturer at the School of the Art Institute of Chicago.

Silke Otto-Knapp was born in Osnabruck, Germany, in 1970. She completed a degree in cultural studies at the University of Hildesheim in Germany and received her MA in Fine Art from Chelsea College of Art and Design in England. Until 2013, Otto-Knapp lived and worked in London. In 2014, she relocated to Los Angeles where she is and Assistant Professor for Painting and Drawing at UCLA. Recent solo exhibitions of her work include Land lies in water at the Art Gallery of Ontario, Monday or Tuesday at Camden Arts Center in London, Questions of Travel at Kunsthalle Vienna, and Geography and Plays at Kunsthal Charlottenborg. Her work has been shown at Tate Britain, Hammer Museum in Los Angeles, Berkeley Art Museum, Migros Museum in Zürich, and Van Abbemuseum in the Netherlands. She is represented by Gavin Brown’s Enterprise in New York, Greengrassi in London, and Galerie Buchholz in Berlin and Cologne. 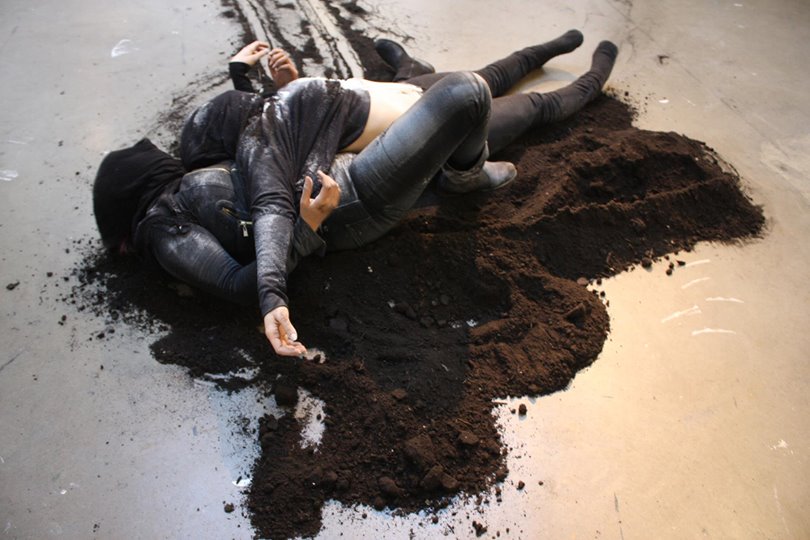