Performance art lives through a direct encounter. How performers engage with the audience – and with each other – is essential to the work. The work depends on the practitioner’s ability to seize opportunities for staging and to create both temporary and dependable institutional contexts.

To note and deploy such opportunity demands leadership. The questions this panel raises are: How is leadership performed? Can we identify traits particular to performance that lend themselves to cultural leadership? How, in fact , do performers lead?

To that end, we bring together five artists whose practice in art, art administration and leadership have made outstanding contributions to the local and global art scenes. Each panelist has developed techniques, methods and strategies to create their own artwork, as well as spaces, programs and festivals, to provide opportunities for fellow artists and their audiences.

With this panel, we celebrate the uniqueness, importance, and richness of the initiatives taken by the guest participants. And we ask, how important are their art skills to the performance of leadership in their communities? And, how does this positively affect the local and global cultural climate?

JACKIE TAYLOR
Jackie Taylor is a distinguished director, producer, actress, educator, singer, playwright and theater founder. She has has written and produced more than 100 plays and musical biographies and founded the 40-year-old Black Ensemble Theater (BE), a strong institution committed to eradicating racism. BE is recognized throughout the nation for its outstanding original productions and exceptional educational outreach programs.

Taylor serves as the president of the African American Arts Alliance and is on the board of the Betty Shabazz International Schools. She has received numerous awards and acknowledgements for her work. The City of Chicago honored her as a 2016 Fifth Star Award Recipient. The former Governor of Illinois, Pat Quinn, declared March 27, 2009 Jackie Taylor day in Illinois.

JOSEPH RAVENS
Joseph Ravens is recognized for his work as an artist, an educator, a curator and the founder and director of Defibrillator Performance Art Gallery. Hee is a co-founder and the director of Rapid Pulse International Performance Art Festival. He has presented his work throughout Asia, Europe, South America, and the US. He studied audiovisuals at the Gerrit Rietveld Academie in Amsterdam, Netherlands, and is a graduate of The School of the Art Institute of Chicago (SAIC) with an MFA in Performance. Ravens is a two time recipient of the Illinois Arts Council Fellowship for New Performance Forms. Other grants, awards, and opportunities have allowed him to build an international reputation. Ravens was included in Live Biennale Vancouver (Canada 2015); 20th Bienal Internacional de Curitiba (Brazil 2013); Venice International Performance Art Week (Italy 2012); and Intrude: Art and Life 366 at Zendai MoMA, Shanghai (China 2008).

MARK JEFFERY
Mark Jeffery is a Chicago based performance/installation artist, curator and Associate Professor at the School of the Art Institute of Chicago (SAIC). Since 1993 Mark Jeffery has developed unconventional collaborations with visual artists, scholars, video artists, sound artists, new media and code artists, dancers, choreographers, curators, and writers. In 2012, he co-founded the language, performance, and technology collective Anatomical Theatres of Mixed Reality (ATOM-r). ATOM-r premiered its first work The Operature in 2014 and has recently premiered Kjell Theøry a performance and exhibition created through two residencies at The International Museum of Surgical Science and The Graham Foundation. ��He is the organizer of the IN>TIME, a tri-annual performance festival hosted by multiple venues in Chicago. Jeffery was a former member of the internationally renowned Goat Island Performance Group from 1996 – 2009.

ANGELIKI TSOLI
Angeliki Tsoli is an interdisciplinary visual artist and Fulbright Scholar from Athens, Greece currently based in Chicago, USA. She is pursuing an MFA in Performance Art from the School of the Art Institute of Chicago (SAIC). Tsoli serves as an independent curator and is a co-founder, with Francesco Kiais, of the performance platform in Athens [MIND THE] G.A.P – Gathering Around Performance, in Athens. Together, they aim to catalyse the cultural activity of performance by building bridges and facilitating networks through the inclusion of national and international artists. They organize performances, workshops, exhibitions and lectures in the field of performance art.

Tsoli has been working predominately in the field of performance art for a number of years since studying in Spain at Universitat Politècnica de València (UPV) and with the Erasmus European Exchange Program and Bartolomé Ferrando. Angeliki graduated with distinction from the department of Fine and Applied Arts from Aristotle University of Thessaloniki. Tsoli is interested in radical education through the medium of performance and her work explores the political, poetic and displaced body. 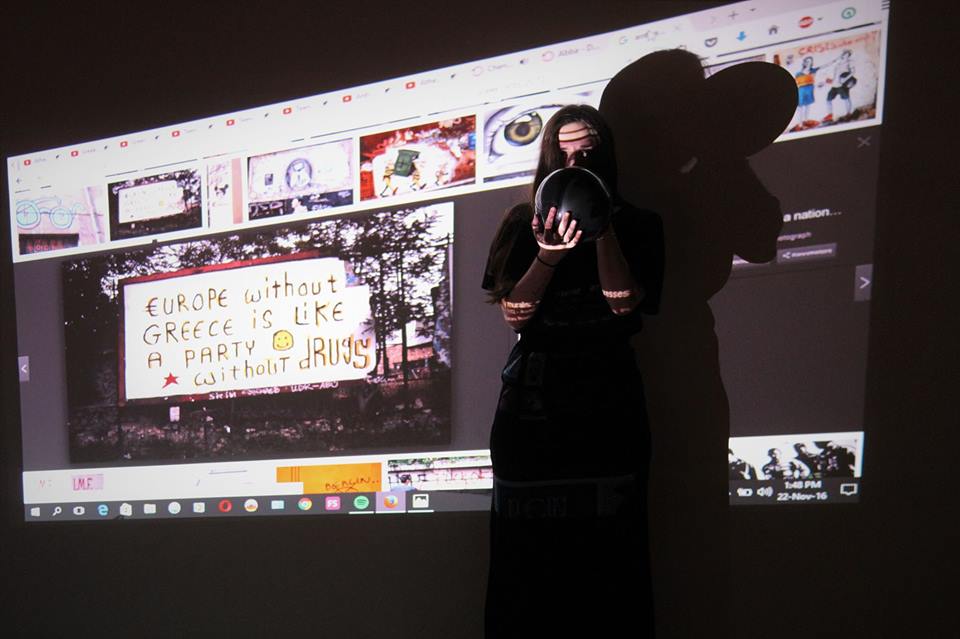