Here let me send you what I have

“the critical potential of collaboration has to be problematized in relation with the question of authorship, as the latter holds a prominent place in modern academic self-image and systems of valorization. Thus, authorship is central to understanding how collaboration can provide a critical pathway to the production of knowledge. To be successful, collaboration needs to steer participants away from an intellectual state of idleness, where the eﬀects of one’s social, historical, institutional, ideological, gendered and cultural situatedness are ‘in an unthought stage’ (Bourdieu 1994: 217). To this purpose, collaboration can oﬀer a networked and dynamic collaborative environment within and through which ideas are critically fostered and engaged with, but also an epistemic frame where the notion of individual(ist) production is not necessarily celebrated as a competitive feature of contemporary academia, but re-situated in the dialogical dynamics of knowledge production, management and valorization.”

Did you see what I posted in the doc?

More-so related to ecology than collaboration, this excerpt from the introduction to Jason W. Moore’s “Capitalism in the Web of Life” offers a nice, brief analysis of how early human life developed symbiotically with the environment:

“When geographers say space, may we not also say nature? All social relations are spatial relations, relations within the web if life. Socio-spatial relations develop through nature. All species “build” environments – they are “ecosystem engineers.” But some engineers are more powerful than others. Humans have been especially powerful. This is not simply because of thought and language – which are of course central – but also because hominid evolution favored distinctive extroversions: a smaller digestive system and the use of fire as an external stomach; a narrower birth canal and community as external womb; less hair and the production of clothes as external fur. That list could be extended. The point is to highlight the ways in which evolutionary processes were powerfully co-produced: humanity is a species-environment relation.”

Can we think of a way in which to address both the collaboration happening between members of these artist collectives and the material/natural “collaboration” these groups are engaged with?

Omg i looooooove this

It breaks the naturalized, solipsistic idea of capitalist development. Like, competition as a species-eat-species, top down effect is a matter of the way we perceive time at a small scale. We are engineers in a world of engineers, a world which itself is an engineer. But not so technically; more ambiently.

I like the way these two texts of ours breathe back and forth.

Omg wait should we just use this for the press release?

Haha, are these two texts dangerous together??! 😀

DANGEROUS TOGETHER, co-curated by Prairie and Micah Schippa, presents: 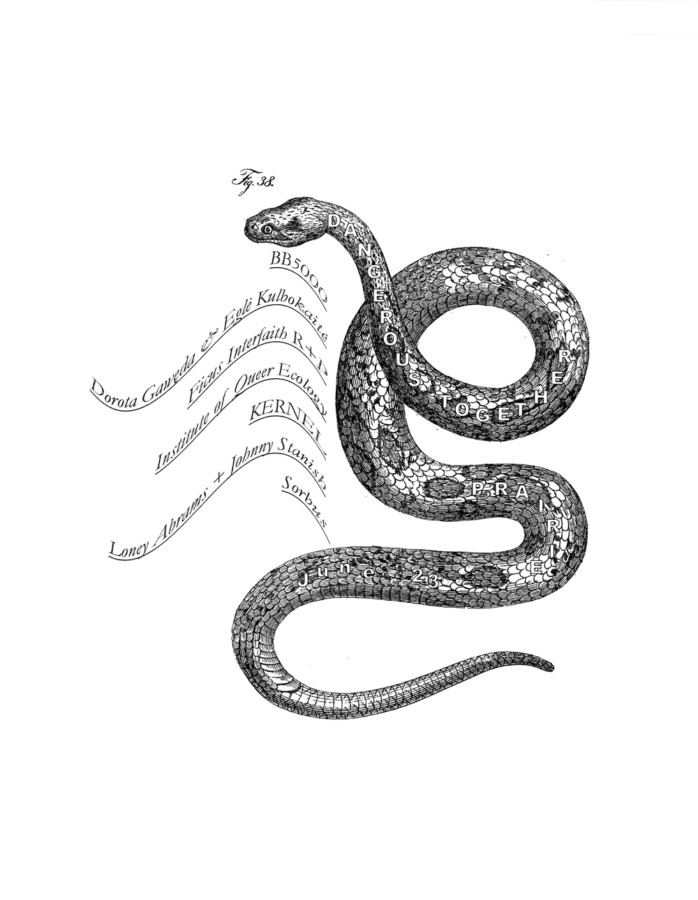