On view through Saturday, July 1st

On the way, downtown to celebrate another wildly successful art opening, world renowned and millionaire artist Jean-Michel Basquiat could not get a cab.

“…One cab, two cabs, three cabs, four cab, five cabs like pass, and Jean you know would sometimes get mad…but you feel these moments it was just a part of being black and living in New York City.”
—-Fred Brathwaite, (The Radiant Child, 2010)

Before he was a gallery artist, Basquiat created evocative graffiti under the pseudonym SAMO (Same Old Shit).

I am fascinated by split-second moments of clear realization, particularly when these experiences happen without warning in public. Also, how history informs an ordinary moment in the present.
In this imagined history, Basquiat gets the first cab that passes and goes downtown for dinner uninterrupted.
Everything historically oppressed groups are facing in 2017: same old shit, indeed.

Halka finds enormous beauty questioning that which has become mundane in our daily lives. This has manifest into the idea of Daily Sublimity–to find that which transcends ordinary experience within something mundane. This could be anything–an interaction, a piece of food, a work of art–something that an individual experiences by chance and triggers an intense ecstasy. Halka is particularly fascinated by what these moments look like while in public. In this vein, Halka’s current work seeks to explore these experiences and how they fit into existing systemic oppression and what it means for different people to experience life in public. In an era where a person’s natural urges such as hunger, sexual desire, and belonging to a group can be satisfied in seconds with the swipe of a finger–Halka’s work is inspired by that in a person’s day which forces an individual to stop and feel intense wonder.

Since graduating from Randolph College in 2014, Halka has been working on mosaics, community murals and large scale oil paintings across Chicago. Halka has shown work at ARC Gallery, JBA Gallery, Phantom Gallery Network and the Wildrose Brewing Company. In August of 2017, Halka will have a solo show at the Ecumenical Humanist Society of Chicago. 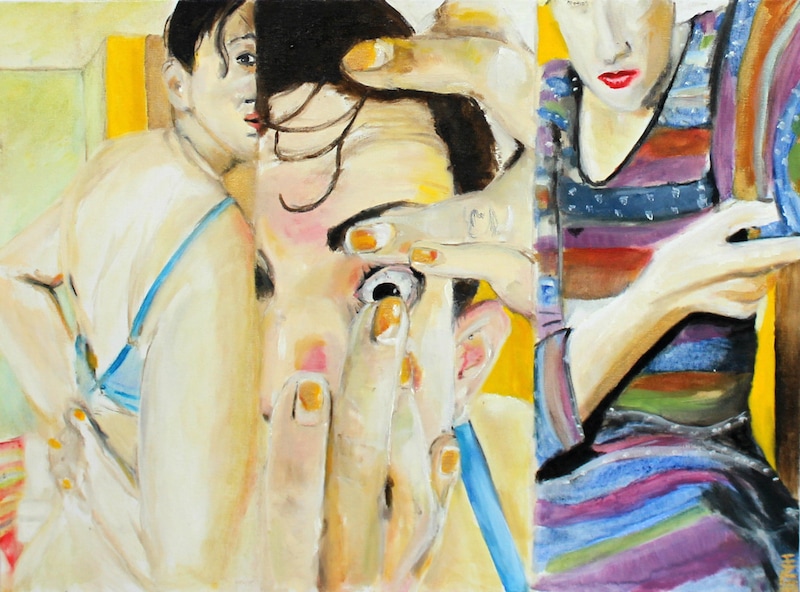