History is ringing louder than ever – we must remember our stories and relearn our rights. Join Art, Now. Act, Now. for a night of performances, teach-ins, and calls to action by Chicago artists, educators, and community organizers, in the first public event of Alphawood Gallery’s Then They Came For Me, an exhibition about the incarceration of Japanese Americans during WWII. Speakers include renowned political activist and commentator Don Washington, Illinois State Representative State Rep. Will Guzzardi – 39th District, and Logan Square immigration and refugee rights activist Anthony Quezado. Featuring performances by comedian Meg Indurti, storytelling with Owais Ahmed, poetry from Payal Kumar, music from Sen Morimoto, and taiko from Ho Etsu Taiko.

Hear about the events that led us to this moment in Illinois immigration history, experience powerful performances from Chicago-based Asian-American artists, and learn how – and why – to act through mini-Know Your Rights talks on protests, legislation, and immigration enforcement.

**This is an ASL Interpreted Event.

ABOUT THEN THEY CAME FOR ME:
What does an American look like? Who is welcome in this country? What is every American’s duty in the face of racist government action? These and other important questions are posed by Alphawood Gallery’s first original exhibition, Then They Came for Me: Incarceration of Japanese Americans during WWII and the Demise of Civil Liberties, debuting Thursday, June 29 and continuing through November 19, 2017. Then They Came for Me at Alphawood Gallery (2401 North Halsted Street, Chicago) is free and open to the public.

Then They Came for Me examines a dark episode in U.S. history when, in the name of national security, the government incarcerated 120,000 citizens and legal residents during World War II without due process and the constitutional protections to which they were entitled. Executive Order 9066, signed by President Franklin D. Roosevelt on February 19, 1942, set in motion the forced removal and imprisonment of all people of Japanese ancestry (citizens and non-citizens alike) living on or near the West Coast. During this 75th anniversary year of Executive Order 9066, we look back at this shameful past to learn lessons for our present and future in the face of new challenges created by fearmongering and racism at the highest levels of government.

Then They Came For Me was organized in partnership with the JASC – Japanese American Service Committee. 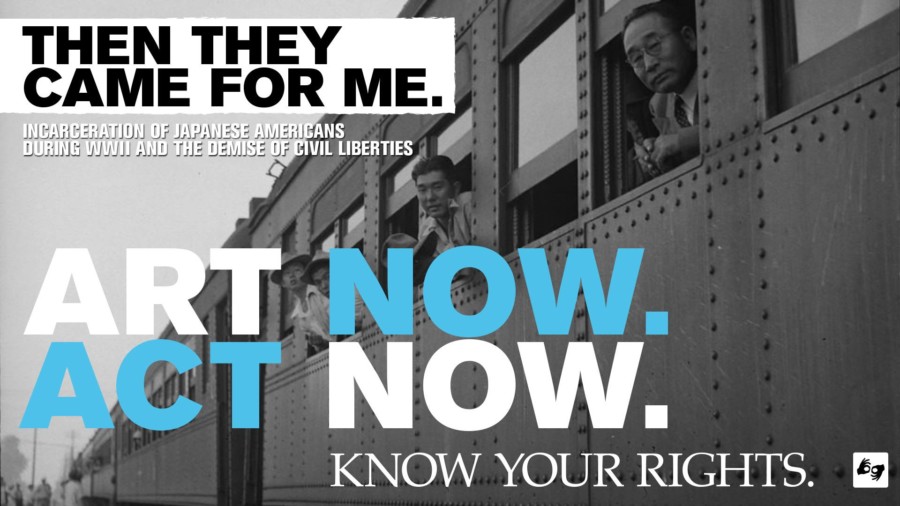