little sister: An Afro-Temporal Solo-Play is at once a memory-scape and a mytho-biography set to poetry, prose and movement. A performance poem spanning from the Antebellum South to present-moment Chicago, it tells the story of a nomadic spirit named little-she who shape-shifts through the memories and imaginings of her sister, the narrator. Through the characters little-she and the narrator, the solo-performance explores embodied ways to rupture and relieve the impact of macro forms of violence in the micro realm of the everyday. To this end, little sister witnesses and disrupts the legacy of violence in the lives of queer Black women through a trans-temporal navigation of everyday encounters within familial, small groups and intimate partner spaces.

Co-Sponsored by: DePaul Center for Identity, Inclusion and Social Change; Department of Women’s and Gender Studies; LGBTQ Studies; and The Women’s Center

Misty De Berry is a Ph.D. candidate and performance artist in the Department of Performance Studies at Northwestern University where she also received a certificate in critical theory. She works at the intersections of performance studies, Black feminist thought, Marxist theory, and art history. She trained as a classical actor at the University of North Carolina School of the Arts where she studied mask work, gesture, Shakespeare and contemporary theater. After receiving an M.F.A. in Interdisciplinary Arts and Media from Columbia College Chicago, she served as Visiting Assistant Professor of Women’s and Gender Studies at DePaul University where she taught classes on Black feminist thought, feminist theater, and performance and social activism. Her original solo-play Milkweed, which looks at gender-based violence in the lives of three Black, queer women, was published in solo/black/woman: Scripts, Interviews, Essays, an anthology that received Honorable Mention for the Errol Hill Book Award from the American Society of Theatre Research. De Berry’s newest work titled little sister: An Afro-Temporal Solo-Play was recently published in the Journal of Lesbian Studies’ special issue on affect, collectivity, and the lives of women of color. Currently Misty De Berry is at work on her dissertation, which examines notions of performance and temporality in the lives of Black women at the intersections of anti-black and state-based punitive ideologies. De Berry is concerned with aesthetic uses of time and duration as a strategy for interrupting habituated modes of violence directed toward Black women. 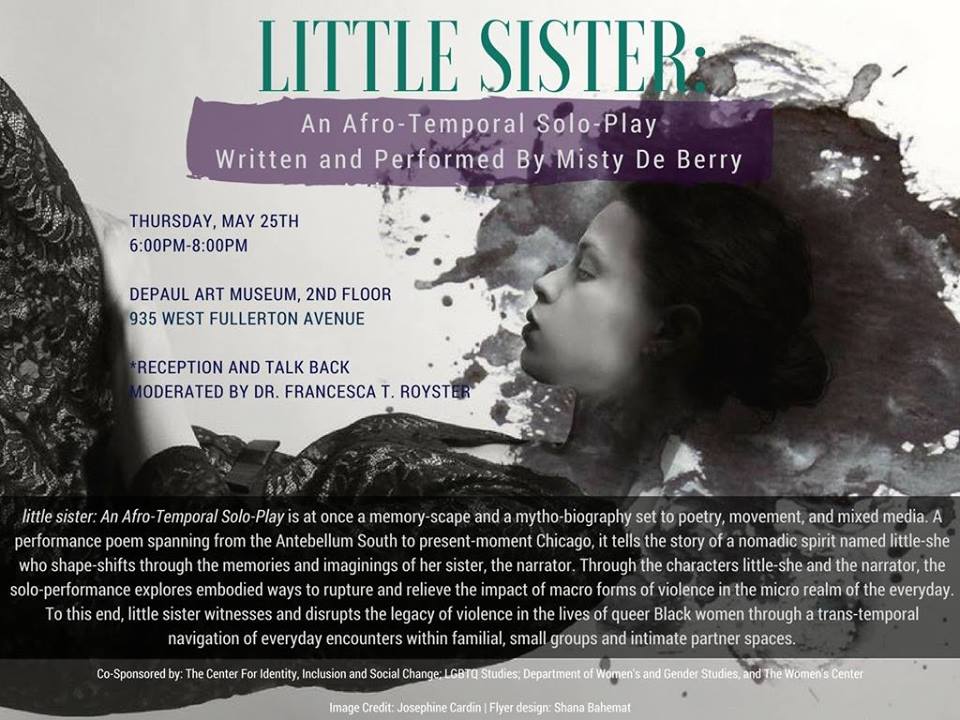