On view through Saturday, May 27th

As a white vocalist whose primary inspiration comes from black female artists, I find it essential to create physical works, objects and paintings, which call out and question the inherent appropriation within my performance practice. Acrylic product-portraits of microphones in object-drag as parrots sensualize this self-parody, making the critique itself a consumable toy. Sparkle-vinyl surfaces each garnished with a Beanie- Baby-esque tag emphasize the paintings’ product-hood and mock the ability of whiteness to turn a slippery profit from it’s own humiliation and criticism. Placing these paintings on the walls of spaces that I activate through performance both amplifies and humbles the work enacted, like totems meant for balancing energies within the room. “Silent Eagles, Jabbering Parrots,” sees objects in quotation marks as Susan Sontag may have in “Notes on Camp”, coated in dense layers of context and identity, in dissonance and singularity, in irrepressible stylization. As alternative facts, click-bates, cheap news, and hyper-social media environments swarm and multiply, truth and fiction are sublimated into squares and rectangles, listening on your walls, masquerading robotics as customer service. In this aviary, the birdwatcher’s gaze is reversed. Your voice may be present, but it’s often drowned out by jabbering. I hope to trap this trauma in surrealist riddles, fighting for its extinction with company.

Jake Vogds is a multidisciplinary performance artist/singer working in sculpture, painting, visual media, and costume. In June of 2014, he was awarded the Shapiro Center’s EAGER Research Grant for his Queer Mixed Realities Collective from the School of the Art Institute of Chicago. He has performed and exhibited at the Museum of Contemporary Art, Defibrillator, Links Hall, Chicago Artist Coalition, Sector 2337, Three Walls Gallery, and the Kalamazoo Institute of Arts, among others. He received his BFA from the School of the Art Institute of Chicago (2014) on a presidential merit scholarship. After teaching performance this past fall at the Art Academy of Cincinnati, Vogds is currently preparing for several 2017 solo exhibitions throughout the Chicago area and abroad. 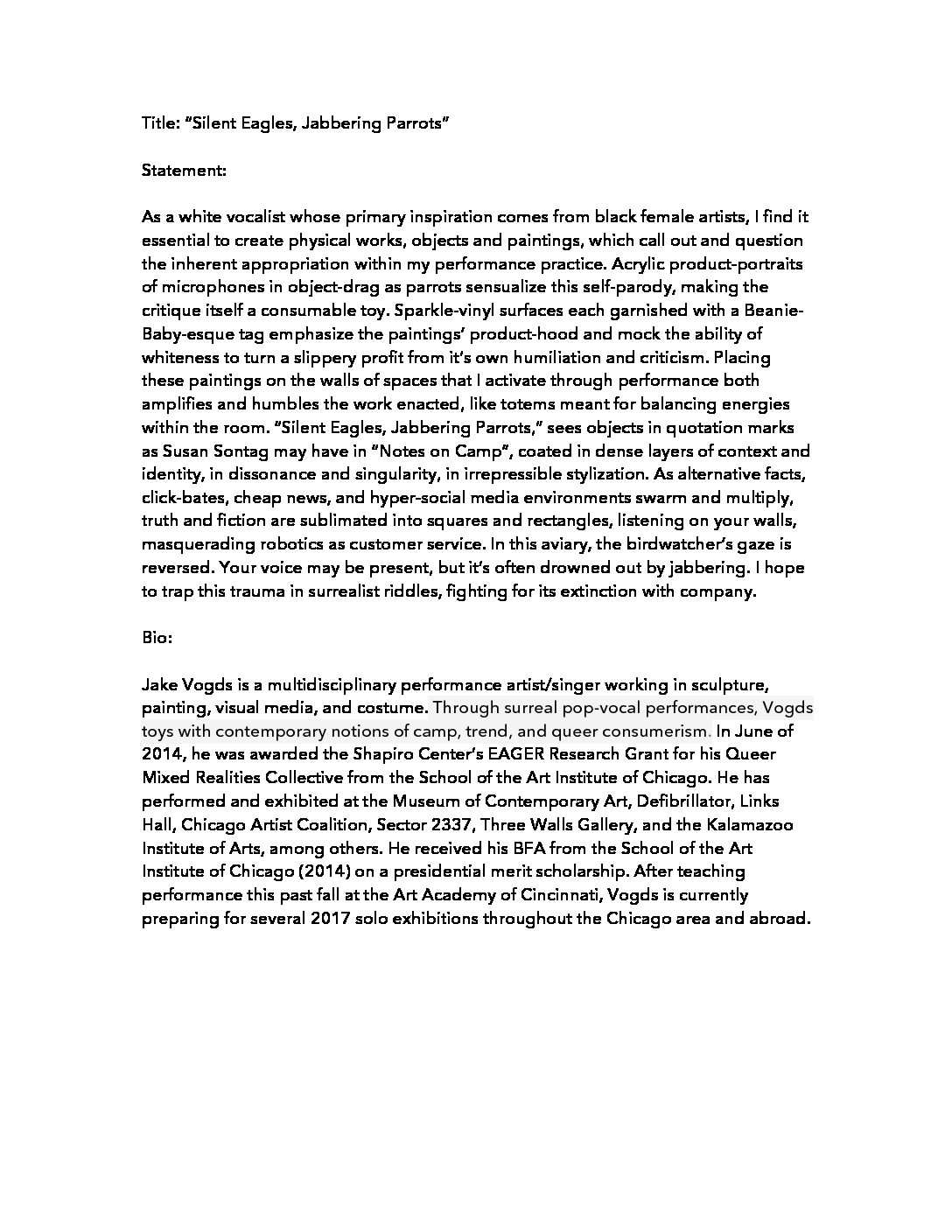