Gabourey Sidibe: This is Just My Face

“Gabby combines New York and Senegal, the streets and the heights, bravery and self-doubt, laughing and seriousness. Her truth helps us to find ours—and what could be a bigger gift than that?”—Gloria Steinem

The Oscar-nominated Precious star and Empire actress comes to CHF to share a one-of-a-kind life story in a voice as fresh and challenging as many of the characters she’s played onscreen. In her much awaited memoir This Is Just My Face: Try Not to Stare, Gabourey Sidibe—“Gabby” to her legions of fans—delivers self-knowing dispatches on friendship, depression, celebrity, fashion, race, and weight. Journalist and essayist Britt Julious joins Gabby for an irreverent, hilarious and untraditional night of conversation on the American experience.

Gabourey Sidibe is an award-winning actress who is best known for the title role of Precious, based on the novel Push by Sapphire. She has since starred as Queenie in FX’s American Horror Story: Coven and Denise in Difficult People, and can currently be seen as Becky on Fox’s Empire. This Is Just My Face is her first book.

Britt Julious is a journalist, essayist, and storyteller. She is a music columnist for the Chicago Tribune and and her work has been featured in the New York Times, Esquire, Vice, and The Guardian among many others. She is also the host of the podcast “The Back Talk.” 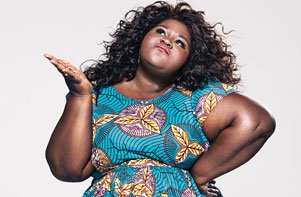