On view through Thursday, April 29th

Elephant Room Gallery is excited to have Springfield-based Artist BURN353 back for another solo exhibition opening April 8th. BURN353 last exhibited with the gallery in 2012 and is back to show brand new works created over the last several months with an exhibition titled “Through My Mind’s Eye”.

“Through My Mind’s Eye” refers to BURN353’s twisted and creative outlook on nostalgia images of his youth. The popular culture references in his work are taken from 1980’s and 1990’s cartoon characters, classic horror films, hot rods and skateboards. Each piece is painted on hand-made wood cuts using a variety of techniques. In some works, his painting is combined with collage, incorporating his collection of vintage comics and other various materials found in his studio. Using a satirical approach, BURN353’s work reflects his fondness and fascination with the images of popular culture. The exhibition will include original works, prints, pins and stickers.

BURN353’s “Through My Mind’s Eye” opens with a reception on Saturday, April 8th from 6 to 9pm at Elephant Room Gallery located at 704 S Wabash Ave. in the South Loop Neighborhood of Chicago. The exhibition runs through April 29th and open hours can be found on the gallery’s website: www.elephantroomgallery.com.

About the Artist
BURN353, an artist and designer from a small farming town in Central Illinois, combines graffiti styles and clean-lined stencil art with mixed media and collage. As a child in school, BURN353 would draw cartoon characters in his notebook, altering their faces and bodies to make them his own. That process continues today. His graffiti influence comes from his childhood when he painted on parked freight trains using spray cans taken from his father’s garage. His very first encounter with graffiti came from watching hip hop films like “Beat Street” and “Breakin’” where he focused on the kids spray painting walls in the background. While his inspiration for subject matter comes primarily from the late 1970’s through early 1990’s cartoons and popular culture, he puts his own twist on the images as a way to harken back to childhood and the ability to use his imagination.
As an artist and graphic designer, BURN353 has shown in numerous galleries throughout the U.S. as well as designed company logos, album covers, skateboard graphics, jewelry, vinyl figures, and clothing for various clients. Although he is most well known for his image of a skull with dropping paint teeth, his work is constantly evolving to include new unique characters and designs. 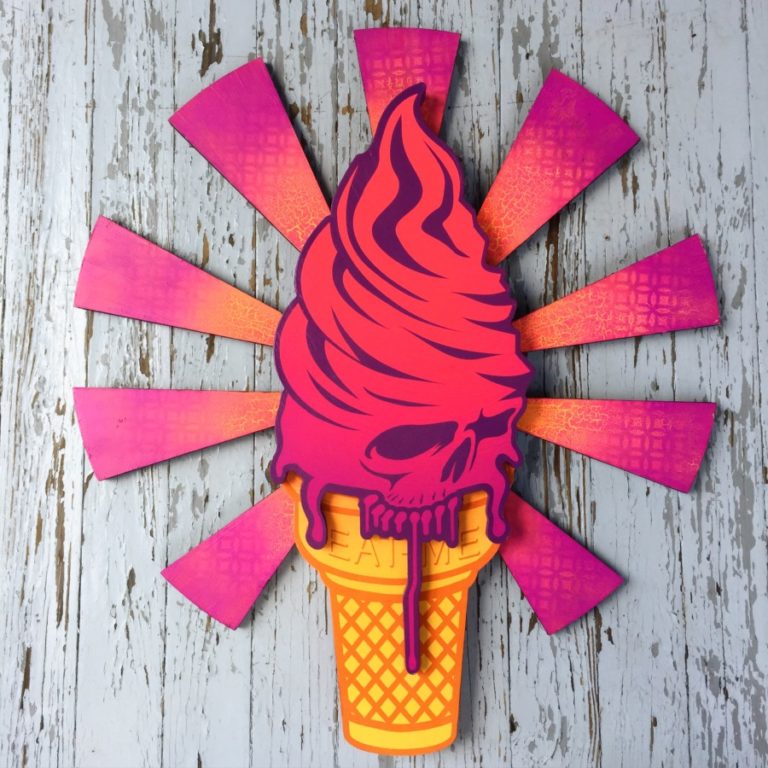